You should be able to reach a new ladder which leads directly to the surface. There are some enemy soldiers there and you will have to start eliminating them. Use the ladder to reach a large park area. Once this is done, start moving towards the first group. Disarm these soldiers or kill them with a little help from your Beta Suit. I'd strongly recommend going back to the sewers before more men get here. 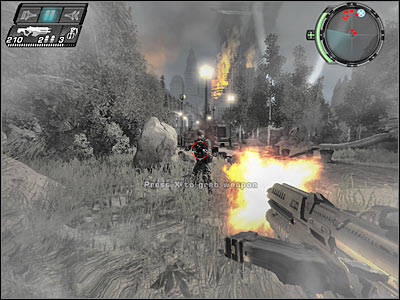 This segment of the mission will prove to be a little boring. You will be killing 2-3 soldiers with one attack. Each time you must exit the sewers and activate your powers. They should already be standing here, so you won't have go anywhere to find them. It's going to take you a lot of time to kill all of them, but at least you'll be safer. Each time you've drained the power bar, use the ladder to go back down. Just make sure that you're not standing near the ladder, because they may use grenades to flush you out. Thankfully, none of them will use the ladder to get down to the draining system. 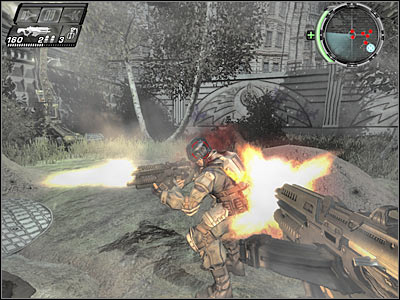 If you've followed my exact instructions, you shouldn't have any problems killing all of the nearby enemy soldiers. This doesn't mean that the area is safe. The upper park is being guarded by 2-3 other soldiers. Start moving towards them. It would be a good idea to stick close to the left wall. As a result, you should be able to approach a large tent safely (screen). You could go inside in order to pick up a weapon from the desk, however it won't be necessary. Wait for a new objective to be added to your list of main mission goals. 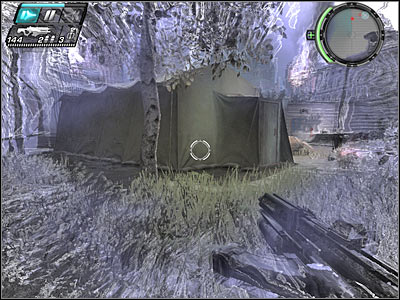 There are TWO heavy machine gun posts to your left and you will have to neutralize them in order to be able to move forward. Let's start with the left gun. All you have to do here is to lean out with the slow-motion feature activated. Use your machine gun to kill the gunner. You could also try aiming at the explosive crate. This will kill him almost instantly (screen). Hide behind the tent in order to avoid being hit by the second heavy machine gun. 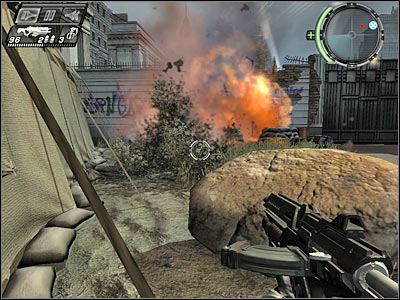 As for the second gunner, you've got some options here. The easiest way would be to lure him into an opening. You could also try and surprise him from one of the flanks, however you would have to stop the time in order to get closer. Either way, he must die. You won't have to explore the second tent. Instead, go to a nearby corner. There's a new tunnel here (screen). 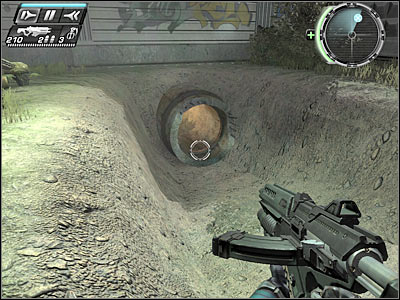 Obviously you will have to enter the tent. Once you're inside, start moving forward. You should be able to reach a fire trap very soon. Thankfully, the solution to this problem is going to be very simple. Activate a time stop feature. This will allow you to go past the flames without receiving any injuries. You will have to stop between fire traps, because your bar will be drained very quickly. After that, exit the tunnel. You should consider saving your game here. 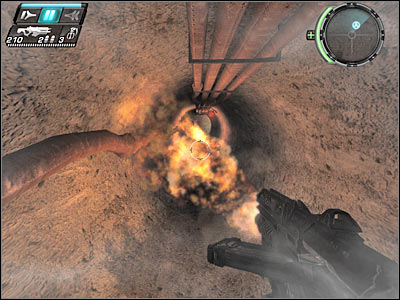 This area is being patrolled by a large number of enemy troops. I'd recommend that you start the exploration by running to your right. There's a wrecked armored car here (screen). It would be a good idea to use it for much needed cover. You should be able to kill at least 3-4 soldiers from here. Once they're gone, go back to the tunnel, because we'll approach the main camp from the other side. 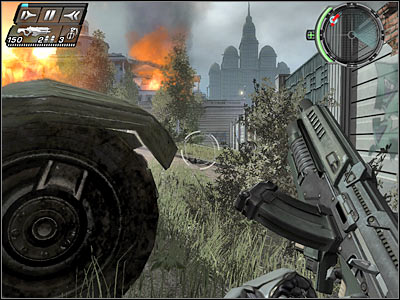