Now you will have to find a new hole in the floor. This will allow you to get to the lower level. Head on to the main courtyard. Be careful, though. One of the enemy soldiers is hiding to your right. He will be standing by the window on the first floor (screen). Take him out as soon as possible. You should also consider collecting ammunition from the dead soldiers. 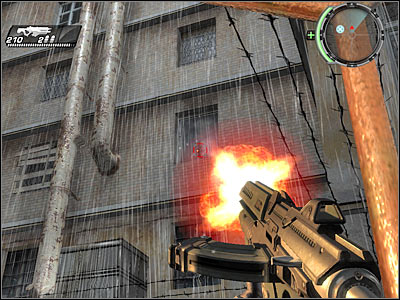 You may proceed towards a large opened gate. I'd strongly recommend saving your current progress here, because you are going to be attacked by some new enemy soldiers. Try focusing on one soldier at a time. Also, don't forget about the possibility to zoom in the view on them. One of the enemy units will be standing on the roof of the nearby building (screen). The rest is to your left and right. Make sure that you've killed them all before proceeding any further. There's also an ammo crate to your left. Use it. 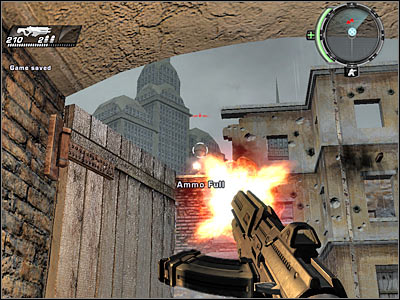 You should know head down in order to enter a large canal area. Once you're there, turn left and start moving forward. You will have to be extremely careful here, so make sure that you're not going too fast. You should be able to encounter a first group very soon. Once again, I wouldn't recommend attacking the entire group. Instead, focus your attention on one soldier. You should also choose longer bursts, instead of single shots, because you won't have any problems finding new ammo supplies. 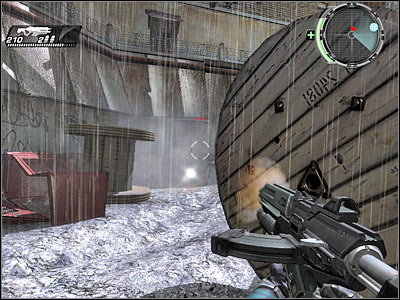 The next group will be standing on the upper level, near the large billboard. Make sure that you've used your compass (upper right corner of the screen) to locate them. Once again, you should consider choosing longer bursts. Also, use nearby objects for much needed cover. This will protect you from sustaining major injuries. Keep moving forward. You will be dealing with smaller groups later on, so it should be easier to reach your target. 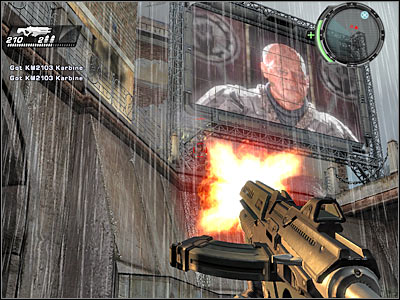 You will have to reach the opposite end of the canal area. There's a large entrance to your left (screen). Go there now. You won't have to pick up any ammunition. Once you're inside, move straight ahead and then turn right. You should be able to reach some of the allied soldiers. 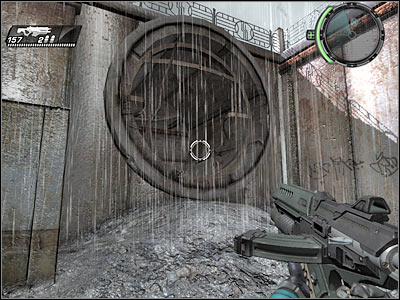 Despite what you might think, you won't have to fight the Sentinel. Instead, make sure that you've found a good cover. Take your time and enjoy this fight, because you won't be able to affect its outcome. You could also try and kill some of the visible enemy soldiers, however it's not necessary. 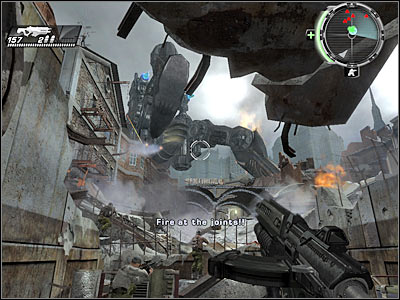 Don't worry about the explosion. Once the mission has ended, you will be rewarded with a new FMV sequence. Just as before, I wouldn't recommend cancelling it. This is it for your introductory mission. Get ready for a more challenging level! 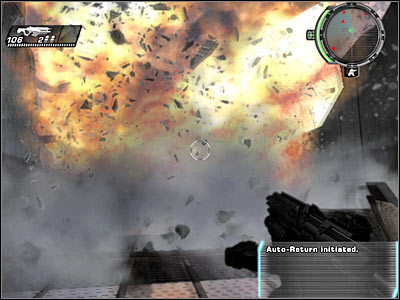