A much larger explosion should take place here. After that, you will probably notice some enemy soldiers. I'd strongly recommend using a zoom feature here for better aim. Make sure that you don't expose yourself too much, so you won't lose a lot of health points. You may also return to the previous room for more ammunition to your machine gun. 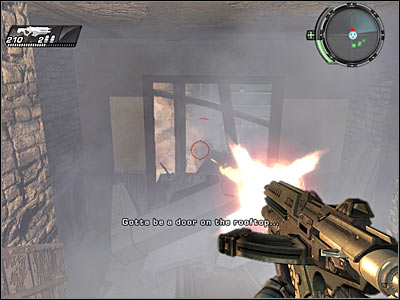 There's a new corridor to your right. Look at the screen if you're having some difficulties finding it. Go there now. You should be able to acquire a new weapon here. It's going to be a KM-33 pistol, however it may also pose as a simple SMG rifle. You will have to use an alternative mode in order to fire more bullets at the same time. It's a fairly good weapon, especially if you're running low on ammunition for the main rifle. Proceed to the next section. 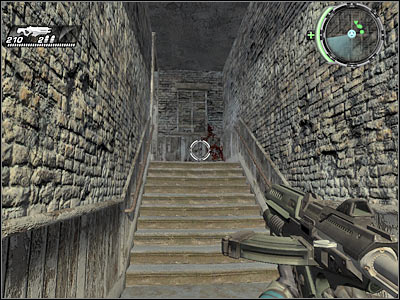 Once again, you will be able to exit the building. There's a single enemy soldier here and it's up to you to get rid of him. I'm sure that you won't have any major problems doing that, especially since you have a lot of ammunition for your two weapons. The second soldier will be standing to your right, on a small balcony (screen). You will have to kill him as well. Use the zoom feature for a better view of the surroundings. 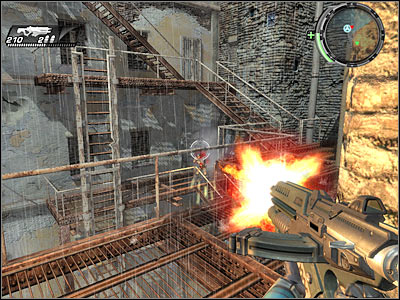 Now you will have to proceed to the stairs. You won't encounter any hostile units for the time being. Instead, you will be allowed to take a closer look at an enemy tank. Thankfully, you won't have to destroy it. Head on to the upper level and enter a new building. You will take part in a short conversation here. Don't worry about the allied soldiers, because you weren't be able to save him. Keep moving straight. You will have to proceed to the lower level. Don't use the previous hole, because you won't find anything of interest there. 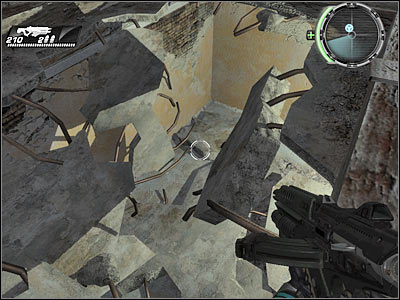 You may proceed to a new room of the building complex. Doing this will allow you to reach a roof with a large neon. Just as before, you won't encounter any enemy soldiers here, so go ahead and proceed to your right. You will have to find a large hole here (screen) which leads to the ventilation shaft. Use it. Once you're inside the shaft, start moving forward. You will have to choose a crouching stance here. 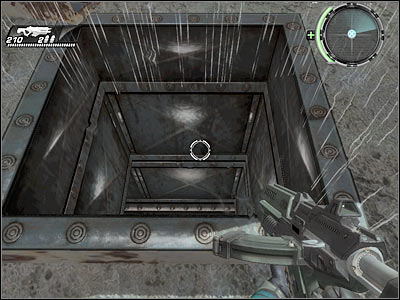 You should be getting closer to a new corridor. There are two enemy soldiers here. The game will suggest that you perform a melee attack here, however you should ignore this hint. It would be better to kill them from here. You may use your pistol, because you'll surprise them. Once they're gone, pick up the ammunition and go to the left corridor. Open a small door. 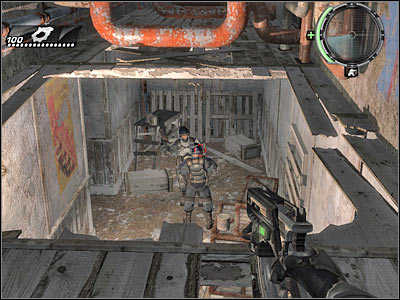 Keep moving straight. You should be getting closer to a destroyed wall. There are two groups of enemy units in front of you. It would be wise to kill them from here. This time you should listen to the advice from the tutorial window. Use the grenade launcher from your machine gun by pressing the right mouse button. Make sure that you've killed both groups before proceeding any further! 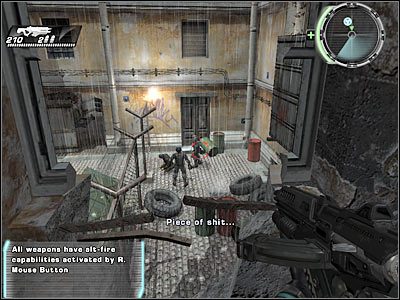