You will start the final mission near a destroyed get. Wait for the game to display your first objective.

Don't worry that you're not carrying any weapons, because you won't need them YET. Start off by leaving this area. Exit the jest and start moving forward. You will have to find a small hole (screen). Use it to enter this large building. Once you're inside, turn right and head on forward. You may consider listening to some of the interrogations, however this is optional. 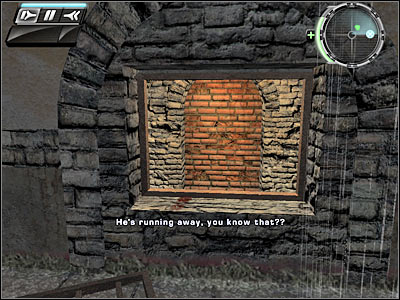 Keep moving forward. You will have to go through several rooms along the way, but you won't encounter any enemies there. Eventually you'll end up standing outside this building. Remember that you won't have to be in a lot of hurry. Find a ladder (screen). Use it and wait for the game to display a new task.

Start moving forward. You will have to head on to the lower platform. It shouldn't be a problem. 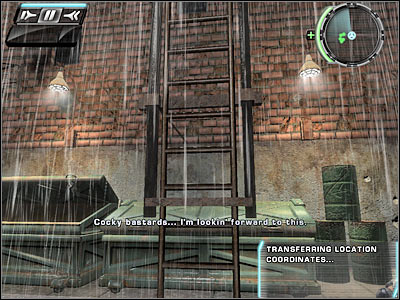 Now you must use a second ladder. You'll probably notice that enemy gunships have appeared in the area. Thankfully, you won't have to defend against their attacks. There's a broken window to your left (screen). Enter this new building. You will come across bodies of dead soldiers. Take their weapons (crossbow, EMF cannon & shotgun). SAVE your game here. 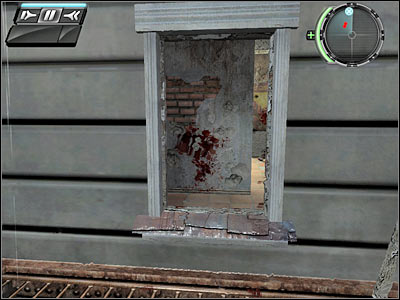 I would recommend using a shotgun from now on, mostly because you'll be exploring rooms, so there's going to a small distance separating you from enemy soldiers. You will have to keep moving towards your current destination. I guess I don't have to say how to win each battle, especially since you'll be allowed to use your powers during these fights. You should also be using a compass in order to locate enemy troops. Make sure to check your surroundings. One of the rooms will contain an ammo crate. 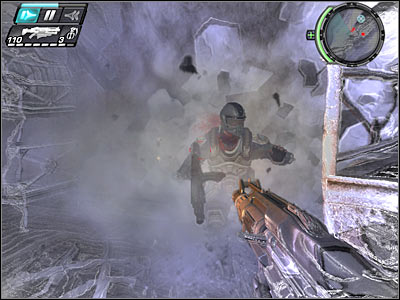 Look at the screen, because that's where you'll have to use the stairs. Head on to the upper floor. Don't forget to save your game frequently. Kill a single enemy unit. Be careful, because he will try to surprise you. Once he's gone, turn right and head on to the stairs. 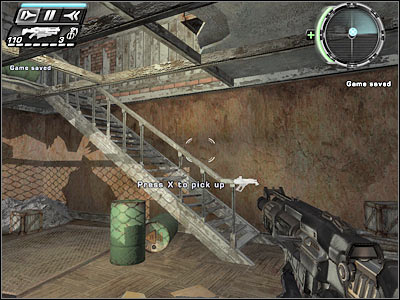 Proceed towards a new corridor. Once you're there, use a nearby ladder. You should be getting closer to a huge robot. Wait here, because you will be rewarded with a mission objective. Make sure that you have read it.

You will have to perform two jumps here (screen). Also, make sure that you have saved your game. Proceed to the next area when you're ready. 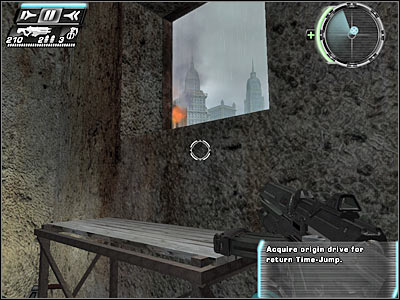 Before you'll be able to take on a huge robot, you will have to defeat three soldiers (screen). They will be using their suits to teleport themselves, so make sure to stop the time each time you fight one of them. As for the guns, I would recommend using Hell-Fire machine guns or shotguns. You should also consider taking a Surge Gun from one of them. You'll find similar weapons nearby, but it would be a good idea to leave them, because you're going to need these guns later during this mission. 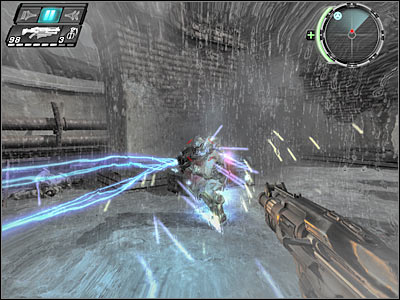 Unfortunately you will have to begin this boss fight right away, because the Sentinel will attack your character without any warnings. Choose a Surge Gun from your inventory. Your goal here will be to destroy three plasma turrets of the robot. Start firing at one of the turrets. Sadly, you can't hide behind walls, because you'd still receive injuries. Once you've depleted ammunition supplies for the Surge Gun, make sure to go to one of the nearby crates. Save the game once you've managed to destroy the first turret. 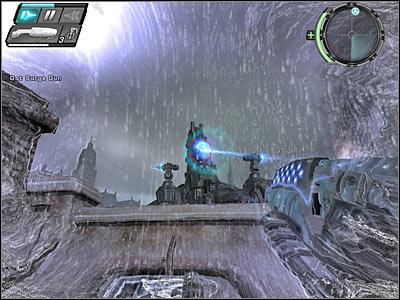