You will start the game inside a small room, near allied soldiers. You won't have to proceed anywhere right away. Instead, you will be rewarded with a very interesting cut-scene. As you've probably noticed, the wind tunnel is going to be your main concern here. Wait for the game to display several new objectives for you. 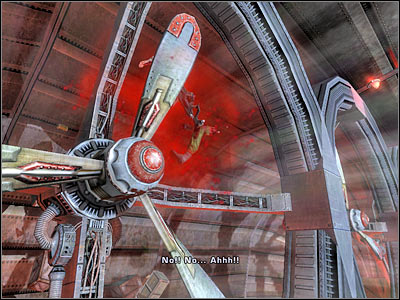 Approach a small door. You CAN'T move forward here, because you would have immediately ended up dead. Make sure that you have saved your current progress. You will have to use a reverse time feature here (screen), so you'll start moving the other way. 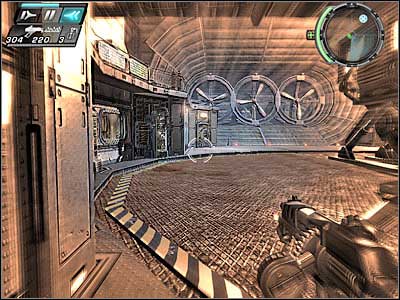 Like I've said before, you will be moving the other way. Make sure that you've pressed the left movement key, so you'll be able to end up in a safe zone (screen). Make a few steps forward here and wait for the power bar to regenerate itself. It's going to take a few seconds, so be patient. 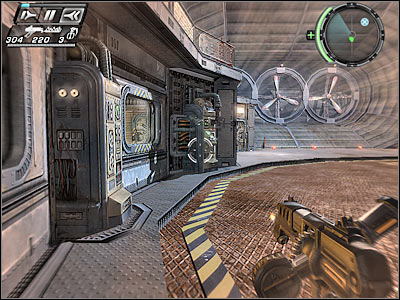 Look at the screen, because that's where you'll have to start moving. Once again, you must use a reverse time feature in order to avoid being killed. Keep heading forward and don't make any unnecessary stops. 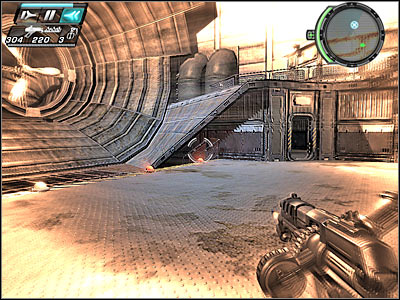 Once your power bar is depleted, you are going to be swept towards the fans, however if you have followed my instructions, you should be able to hit a nearby wall (screen). This is a second safe zone. Just make sure that you're not standing too far away from the nearby walls. 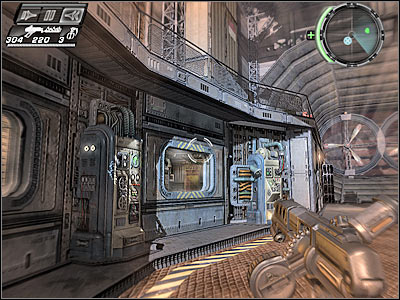 Your last task here is going to be quite simple. Lean out carefully and activate a reverse time feature for the last time. As a result, you'll start moving towards an opened door (screen). Once you're inside, deactivate your suit and deal with two guards. You should also save your game here. 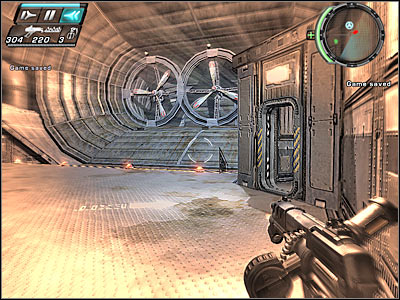 You may proceed towards a nearby staircase. Once you've reached an upper level, take care of a new group of enemy soldiers. You should consider destroying explosive objects here. Head on towards a nearby door (screen). Once you're inside, you should be able to find a ladder. Use it to get to the higher floor. After that, proceed to a second ladder. 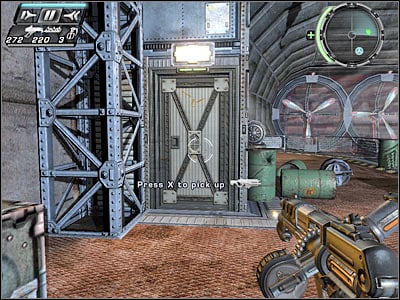 Exit this area. You will probably notice a few enemy soldiers in the distance, but you may kill them quickly by firing at gas canisters. Once they're gone, head on to the next platform and hide behind the crates (screen). You should be able to kill all remaining soldiers from here. Thankfully, you won't have to worry about this platform crashing down, so remain here until everyone's dead. 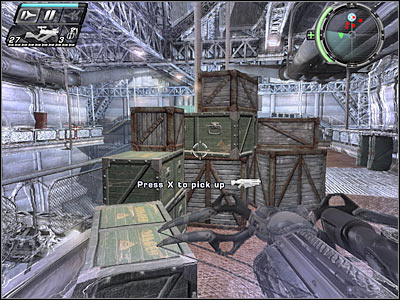 If you have some problems staying near the crates, you can also go back to the previous room (the one with two ladders). Make sure that you have secured a second balcony which can be found to your left. The easiest way to do that would be to destroy some flammable objects (screen). Save your game before you decide to leave this cover. 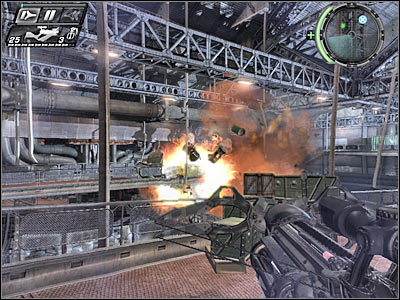