Obviously you will start the game inside the ventilation shaft. Wait for the game to display some new orders. Familiarize yourself with them.

Leave the elevator shaft. Make sure that you're crouching and move forward a little. You should be able to able surprise some of the enemy soldiers. You can either target directly them or you can aim for the gas canisters. You will also find a lot of other inflammable objects in the area, so make sure to use them to your advantage. I can assure you that it'll make your life a lot easier. 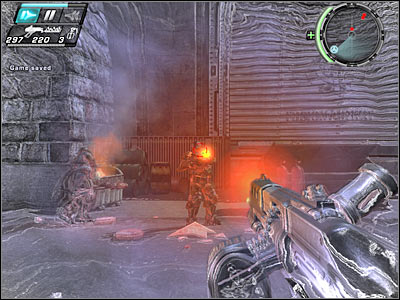 The next group should appear to your right. As a result, I would recommend hiding behind a forklift truck. Use a crossbow or a sniper rifle to kill enemy soldiers. Once again, I urge you to aim at explosive objects (screen), so they'll go down much faster. Save your game after you've dealt with the first group. 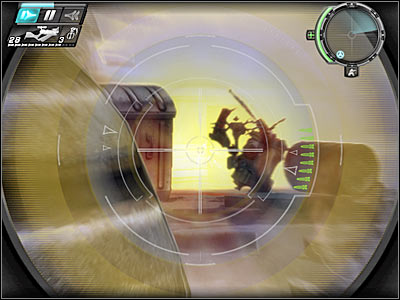 Now you will have to defeat several soldiers equipped with energy shields (screen). I wouldn't recommend allowing them to get closer. Use the crossbow and try aiming for their heads. Once they're gone, collect the ammunition and start moving to your left. 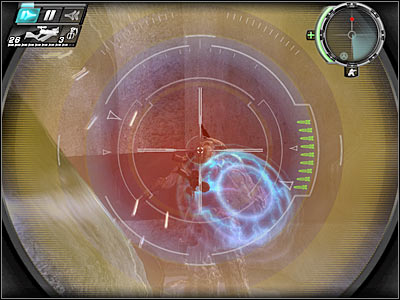 You will come across a large container. It can be found to your right. I'd strongly recommend using it for cover (screen), especially since you'll be able to kill a lot of soldiers from here. Start off by attacking the group to your right. Destroy some of the barrels in order to speed up this process. A second group will appear to your left. Kill them as well. Make sure that you're using a crossbow during these fights. 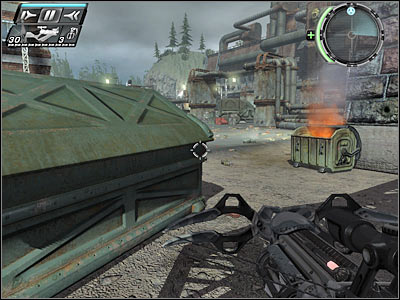 Keep moving forward. You will encounter a few other soldiers along the way. Activate slow motion once you're close enough to three lockers. It's very important, because enemy soldiers are hiding inside of these objects (screen). Use your Hell-Fire machine gun to get rid of them. You can also go back to the green container if you're feeling overwhelmed with their attacks. Thankfully, they wouldn't pursue you that far. Save your game when you kill them. 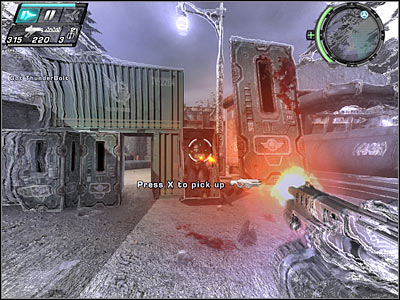 Once again, you will have to back to the crates. Start moving forward. After that, turn right and wait for the game to display new objectives.

Get ready, because you'll have to take part in some challenging battles here. You'll be going against soldiers with energy shields. The easiest way to get rid of them would be to use a rocket launcher or to throw a couple of grenades at them. You could also take them out from a larger distance with a little help of your crossbow. 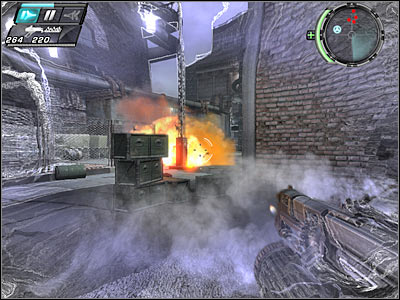 Now you will have to deal with all remaining enemy units. There's going to be a large distance separating you from each other and nothing will obstruct your view, so you shouldn't have any problems getting rid of them. You should also consider aiming at flammable objects here in order to finish them off even faster. Once they're gone, save your current game and go to your right. 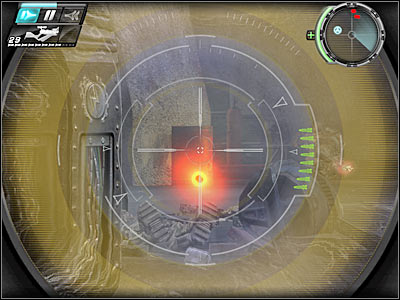 Keep moving forward. You will be encountering additional soldiers along the way, however killing them is going to be very simple. You'll also come across an ammo crate (screen). Make sure that you've used it, especially if you don't want to check bodies of fallen enemies for extra bullets. You will also return to this crate later on during the course of this mission. 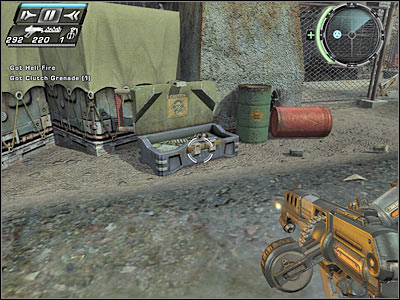 A new group of enemy soldiers will appear to the right of the forklift truck. Wait for them to gather around one of the explosive barrels and kill them with one shot from your crossbow. Your main objective here will be to reach some of the nearby crates. Check the screen if you can't find them on your own. BEFORE you decide to use the crates to jump over the fence, SAVE your current progress. 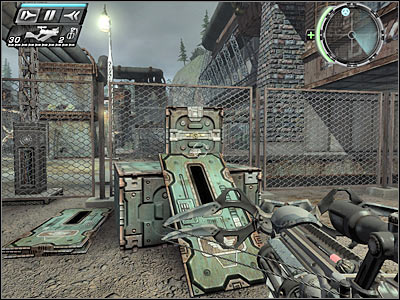