Obviously you'll start the game inside the exact same elevator. Wait for the game to grant you with new orders. The first one will appear right away and the second one later on.

You should be able to reach your new platform very shortly. You won't have much time to prepare here, because you are going to be attacked almost instantly. The first soldier is standing to your right (screen). Kill him and hide behind the crates. 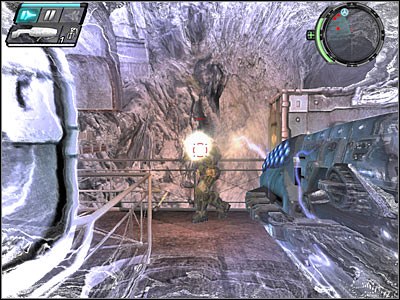 Now you will have to focus on eliminating enemy snipers. It's very important that they die quickly, because they're using crossbows to hunt you down. There's going to be at least a few of them. One of them will be standing on a high platform of the left tower (screen). Save your game and start moving forward. 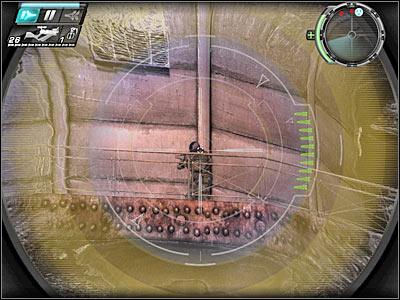 You've probably noticed that you must go right here. You will be moving towards a large white container. Get ready to take out additional enemy troops. Once they're gone, head on to your left. Once again, you will have to deal with fast moving opponents. Make sure that you've used slow-motion. They will try to surprise you by hiding in some of the nearby lockers (screen). Obviously you should try aiming at their heads. 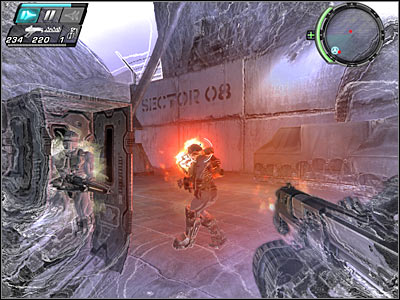 You will probably have to kill two of those soldiers right away. The third one will be standing in front of you. Use a crossbow to kill him, especially since he'll probably want to stay there, instead of moving towards you. Keep heading forward. You will encounter several weapon stashes along the way, but you may ignore them. You will have to go right here (screen). Wait for the game to display a new objective. You MUST also save your current game. 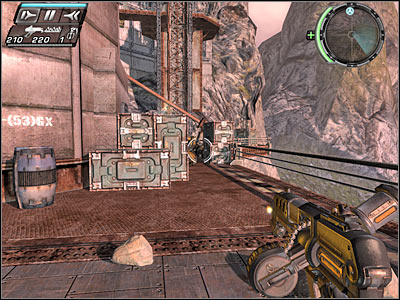 I assume that you don't have a rocket launcher with you. This means you have to acquire one of these weapons. As a result, you will have to go to your left, because that's where you'll find a new rocket launcher (screen). You should consider exchanging it for a standard machine or an E.M.F. Cannon. You will also be able to find an ammo crate nearby, however you probably won't have to go back to it while trying to destroy the gunship. 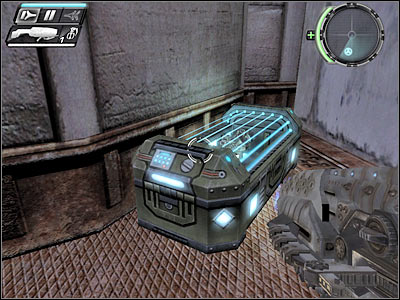 Try moving closer to a nearby balustrade. Activate zoom and slow-motion. Once this is done, start firing at the gunship. Once you've fired four missiles, go back to the place where you found the rocket launcher. You will be safe there. Reload your weapon and wait for the power bar to regenerate itself. After that, go back to the previous area and start shooting at the gunship again. You will have to hit it several times before it can be destroyed. It shouldn't be too hard to avoid attacks of the helicopter, especially if you're using your powers. You may consider leaving a rocket launcher in your inventory, however you find it to be very useful here. Wait for the game to display a new objective for you.

New mission objective: Use the elevators to proceed to the top of the facility 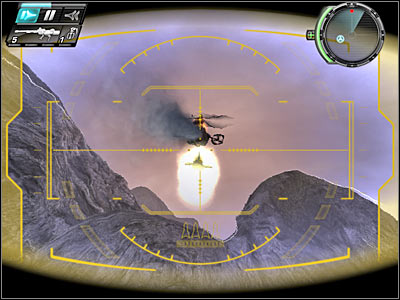 Start off by saving your game. As you've probably noticed, several soldiers equipped with energy shields are heading your way. You may kill them with your crossbow or wait for them to get closer, however you would have to use a Hell-Fire machine gun or newly acquired Surge Gun. Either way, they must die. 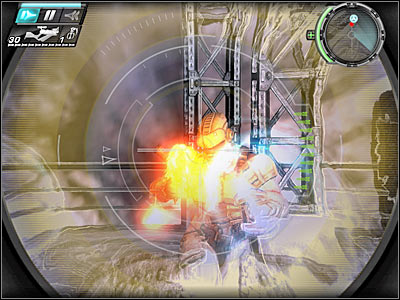