You'll start the game inside a small corridor. I would recommend that you familiarize yourself with your new goals.

You will have to approach a small door. Be careful. Some of the enemy soldiers will probably try to get here. Kill them as soon as possible. You shouldn't have any problems with that. Bear in mind, though, that they're heavily equipped. As a result, aim at their heads for better results. You should also be on a look out for gas canisters. Destroying these objects is always helpful. 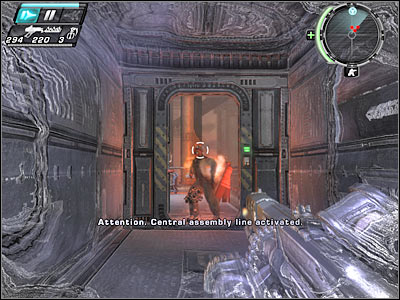 Try going back to the entrance. One of the enemy soldiers will probably be hiding to your right. Activate a slow-motion option and aim for his head if you don't want any troubles here. Once he's gone, find a ladder (screen). Using this object will allow you to proceed to a lower level of the factory complex. You'll probably notice a few soldiers to your right. Ignore them. 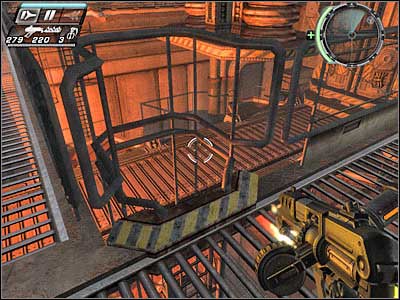 Now you must head on to a new ladder. Look at the screen if you're having some difficulties finding the correct one. Using this ladder will allow you to go back up. You'll find yourself near an assembly line. As you've probably suspected, you will have to avoid a lot of hazards here in order to successfully reach your goal area. Save your game before you proceed any further. 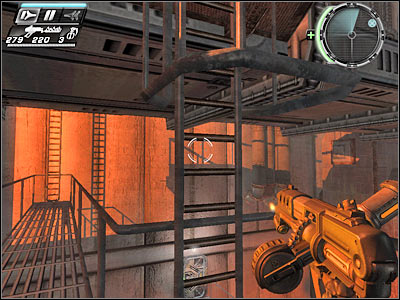 Try moving closer towards the first crusher. You shouldn't have any problems figuring out what has to be done here. Activate a time stop function and start moving forward in order to avoid being squashed by it. You will have to repeat this action with the rest of the machinery. Don't stay on the assembly line all the time. There are some small balconies nearby. Use them in order to allow the power bar to replenish itself. Also, make sure that you're saving your game frequently. 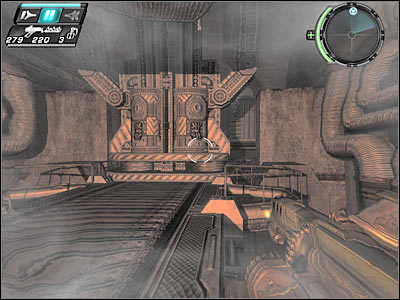 Once you've dealt with two crushers, you will have to avoid the flames. Use the right balcony and prepare to move forward. Once you're close enough to the trap, activate a time stop function. Next, you will have to through a small tunnel. There are no traps here. Once you've left the tunnel, head on to the left balcony. 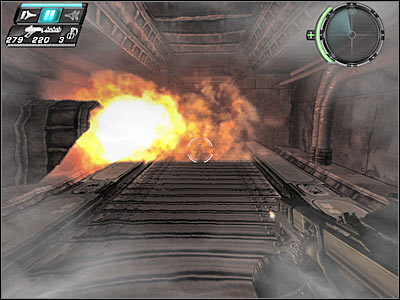 One of the enemy soldiers should be standing to your right (screen). He's focused on operating the machinery, so he won't see you. This is a great opportunity for you to surprise him. Aim for his head. Once he's gone, head on to a new set of crushers. Just as before, make sure that you're stopping the time and you should be fine. 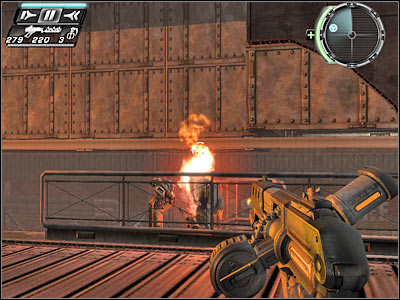 You should be getting close to a new type of a crusher (screen), however you won't have to plan anything out of the ordinary. Just make sure that you have waited for a right moment to activate a time stop function. After that, start running forward. Don't go near the flames. Instead, proceed to the left balcony and save your game. 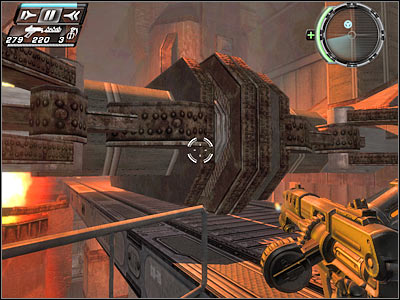 This was the final section of the assembly line, so you won't have to go back there. Instead, turn left. There's a small platform here (screen). Perform a single jump in order to land on it. Head on to the nearest door. There's a crate with a weapon here. Take it. Go back to the balcony and get closer to a new ladder. 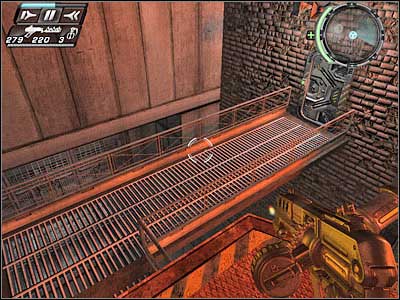