You'll start in a very similar area. Familiarize yourself with new orders.

Start moving forward. Obviously you should consider picking up a crossbow from the crate. You'll end up near a clearing. I'd strongly recommend that you use some of the nearby objects for cover. Wait for enemy soldiers to get here. They will approach your position from the left flank. 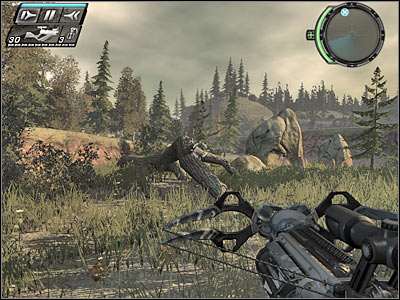 You'll probably notice a new type of soldier amongst enemy troops. These enemies are equipped with powerful armors and energy shields which protect them against most of your attacks. Obviously you shouldn't be firing at the shield. Instead aim for the head or you could try and shoot their legs. You can also consider using a rocket launcher or a grenade launcher to get rid of them much easier. You will have to kill at least one of them from here (with a crossbow). 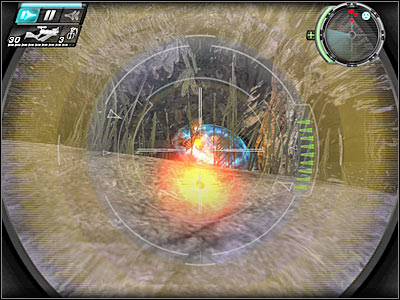 You should be hiding behind one of the larger boulders (screen). This should allow you to get rid of most of enemy troops without risking too much. Make sure that you're using a crossbow to kill them. Once they're gone, save your game and proceed to the nearby hill. 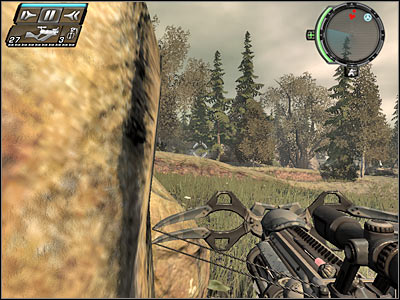 You should receive a proper warning that there's a second opponent with an energy shield here. I'd strongly recommend using more powerful weapons against him. Also, make sure that you're constantly moving, so he'll have some difficulties firing at you. Like I've said before, you should be aiming at exposed parts of his body. Once he's gone, save your game once again. 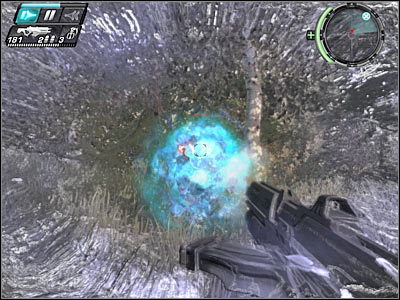 You should consider checking the bodies of all defeated soldiers. One of them will be carrying a new type of weapon - Hell-Fire. I guess you won't be surprised by the fact that you won't collect too much ammo for it. Exchange it for a shotgun or (if you're feeling more comfortable) for a machine gun. Hell-Fire is one of the most useful weapons of the game. It's mostly a very powerful machine gun, but if you press the right mouse button it can also act as a primitive flamethrower. 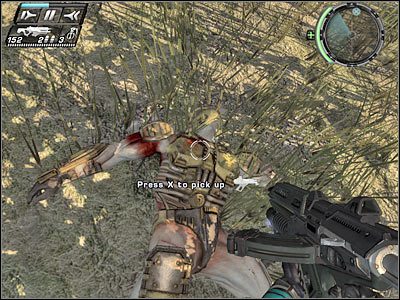 Now you should focus only on reaching your current goal area. You shouldn't encounter any additional enemy units. Once you've reached a new area (screen), turn left, because that's the only passageway leading to your destination. You should be getting closer to the train tracks. Turn right and save your current game. 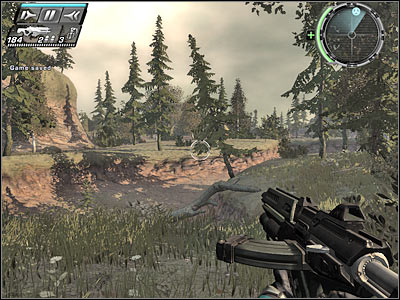 You will come across a new mine field here. Sadly, you won't be allowed to use your powers, because the field is just too big. Instead, you'll be shooting at the mines. It's not as difficult as it sounds. Once you're close enough to each of the mines, it'll start to pulse, so you'll know that it's there. Obviously you will be moving very slowly here. Look around a lot, so you won't miss anything along the way. 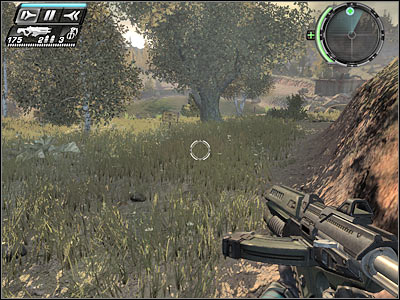 You shouldn't have any problems finding and destroying the mines. I would recommend moving close to the train tracks (they're to your right). Just make sure that you aren't in a lot of hurry. There's only one well hidden mine in this area. Check the screen for additional info. I guess you wouldn't expect for it to be that high, so make sure that you destroy it before moving any further. 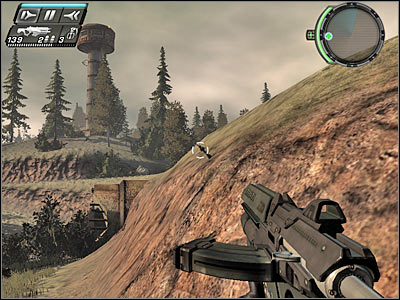