Obviously you'll start the game driving an atv. You will also have to watch a short cut-scene. The title of this mission clearly suggests that there's a longer road trip ahead of you. Start off by finding out about your first objective.

Start moving forward. You should be able to reach your first large area very soon. 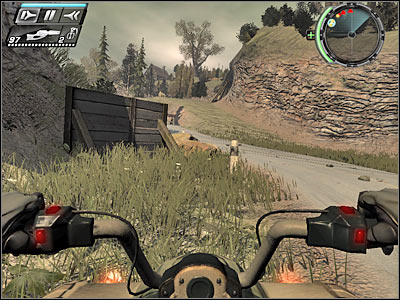 You'll probably notice a lot of enemy soldiers in the distance. You could try and go past them, especially since you have an atv at your disposal. I have to warn you, though. It's very risky. As a result, it would be better to get rid of them from a large distance. Use a wooden barrier for cover. Choose a crossbow or a sniper rifle and start shooting at the visible enemy units. You won't have to worry about sustaining any injuries, because there's a large distance separating you from each other, so they would have to be very lucky to hit you.

Make sure that you've killed all visible enemy units. Go back to your atv and use it to get to the nearby hill. Sadly, you can't use the main road, because an enemy jet has crashed there. Make sure to check bodies of killed soldiers along the way, especially if you've used up a lot of projectiles for your crossbow. 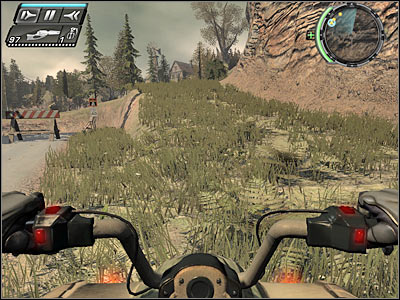 Keep heading straight. You won't encounter any other soldiers for the time being, so you won't have to think about slowing down. You will have to use your vehicle to go back to the main road (screen). You'll come across two soldiers there, but you may consider running over them. It should kill them instantly. Save your game here. 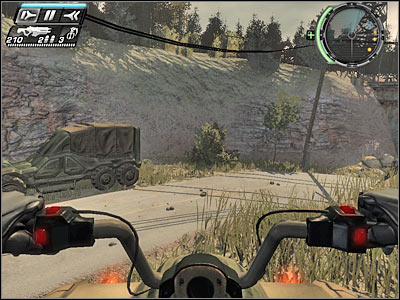 Move forward a little, however you should consider hiding by the large boulders. Use one of your sniper weapons and take a look at your surroundings. One of the enemy workers is standing next to a truck (screen). Kill him and wait for his colleagues to show up. You will have to get rid of them as well. Try maintaining a large distance. 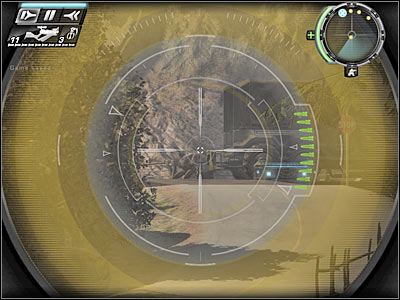 Once you've dealt with the first group, try moving closer to the truck. There's a bridge to your left and you will have to secure it right away. It's very important, because there are two snipers out there (screen). You should even consider stopping the flow of time to increase your chances of defeating them. You'll find an ammo crate here, so make sure that you've resupplied. Save your game and wait for a new objective to be displayed on your screen. 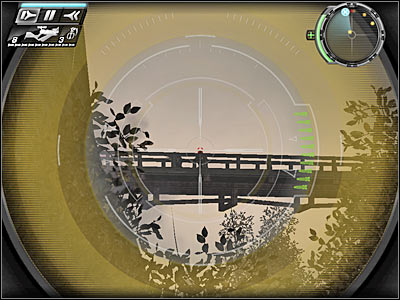 As you've probably noticed by now, there's a new atv on the bridge. Don't use it right away. Leave it there and head on to the other side of the bridge. Enter a small hut. You will find a console here with a single button. 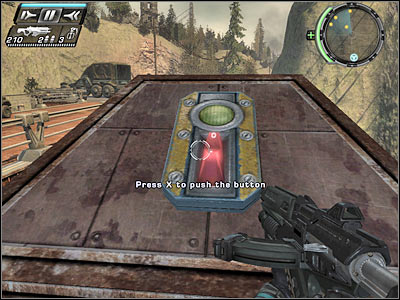 Press the button and stop the time right away in order to prevent the bridge from moving. Go back to the bridge and make sure that you're standing on it. Deactivate this function and allow the bridge to raise itself. I'm sure that you know what has to be done here. Go back to the atv. Back it up a little. Start moving forward and press a nitro button once you're near the edge. If you've done everything according to the plan, you will end up at the other side of the fence. Save your game there. 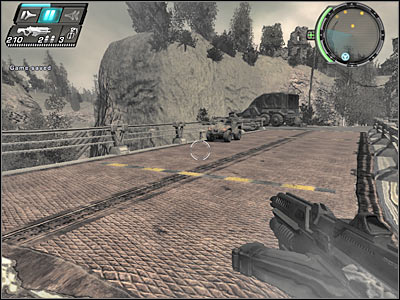