This mission will begin with a short FMV sequence. You'll start inside the tunnel. I'd strongly recommend waiting for the game to display your new objectives.

Start moving forward. You should be able to reach the exit from the tunnel very soon. Leave your quad here and move towards the soldiers on foot. 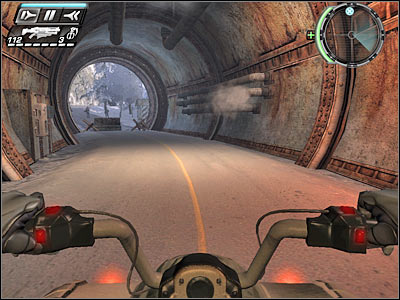 You won't have to attack these guys from a larger distances. If you've chosen a crouching stance, you shouldn't have any problems sneaking up on them. Just make sure that they don't turn around. Stop the flow of time and kill them with your shotgun. It shouldn't be much of a problem. Collect their weapons. 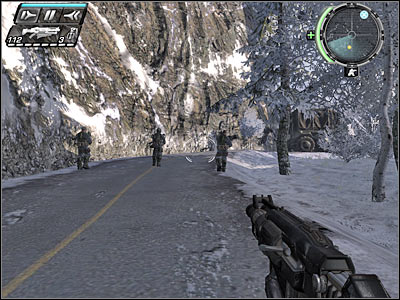 You should be moving to your right, however that area is heavily defended. Additionally, you wouldn't have anywhere to wide. As a result, it would be wise to go back to the tunnel exit. There's a concrete barrier here. Use it for much needed cover. Enemy soldiers will be moving your way, so you shouldn't have any problems killing them. Be careful, though. Most of them are equipped with crossbows. Use the slow-motion feature to kill them. 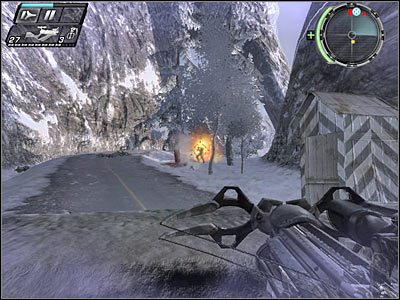 Once you've secured this area, start moving towards your first goal. You will come across a large truck. I'd strongly recommend using it for cover. Lean out carefully. There's a gunner nearby (screen) and you must kill him before moving forward. Once he's gone, collect ammunition (especially for your crossbow) and save the game. 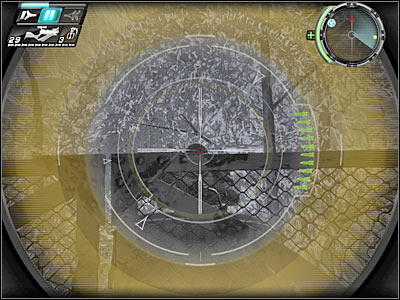 Now you will have to turn left. Make sure that you're standing near the truck. Use the slow-motion feature and take care of an enemy sniper. He's occupying a watch tower, so you shouldn't have any problems finding him. You will have to go there now, so leave the main road and start moving forward. You won't encounter any units for the time being. 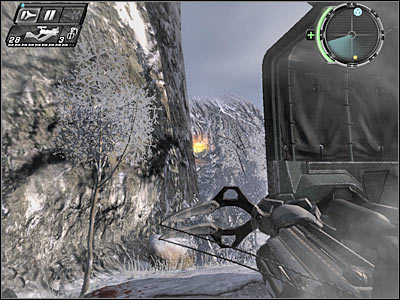 Approach the watch tower. You'll probably find a new weapon here - Bloodhound. This is a standard rocket launcher. You won't have to pick it up right away, but if you plan on attacking enemy soldiers with it, you should consider exchanging it for the shotgun. Use the ladder to reach the top of the tower. As you've probably noticed, there's an ammo crate, so you won't have to worry about running out of bullets, projectiles or missiles. Reload your weapon and save your current progress. 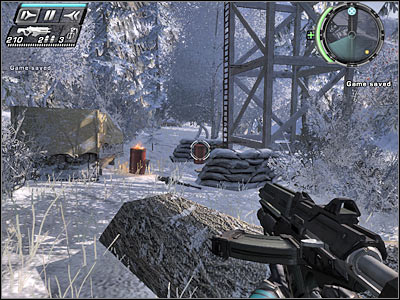 Despite what you might think, you'll have to take action in some very difficult fights. You won't be allowed to take out enemy soldiers without risking your own life. They will be able to respond to your actions. Start off by activating slow-motion. You will have to take out two enemy snipers. One of them is to your left (screen) and the other one can be found to your right. Also, try killing at least one gunner. The left bunker seems to be the easiest target. 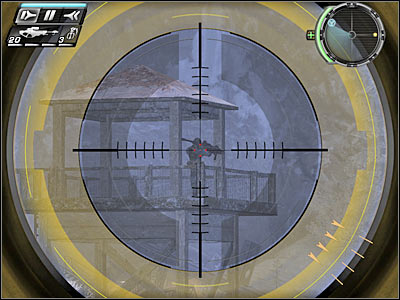 If you're running low on ammo, health or power, try moving back to nearby crates (screen). You should be safe here and if you position yourself correctly, you'll be able to kill a few other units without risking anything. Don't forget to use the ammo crate to replenish your supplies. Keep shooting at the enemy soldiers. Save your game each time you're standing behind the crates. 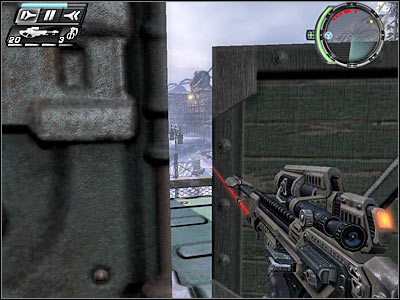