Like I've mentioned before, you'll begin directly on the ground. Read your first task.

You will be standing near a small group of allied soldiers. Don't follow them, because you would have ended up being attacked by a large number of enemy units. Instead, head on straight and hide behind the rocks. You should have a sniper rifle in your inventory, so start using it right away. An armored vehicle will arrive here shortly. Try taking out its gunner. 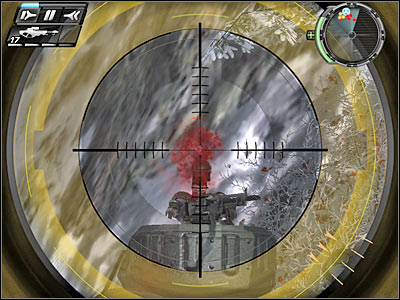 Now you should start shooting at the enemy soldiers. Most of them will appear near the armored car or to your left. Prevent them from using a secured heavy machine gun post. Thankfully, you should have a lot of sniper rounds at your disposal. You could also use a standard machine gun against them, however you can achieve much more with a sniper rifle. 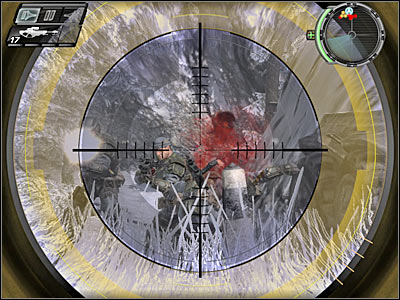 Don't even think about helping your allies, because they'll die eventually and you won't need them in order to succeed. Try staying near the rocks, however you will have to watch out for grenades. Avoid them at all costs. Also, some of the enemy soldiers may try and get closer. Kill them before they manage to surprise you. They will be attacking you from the left flank. 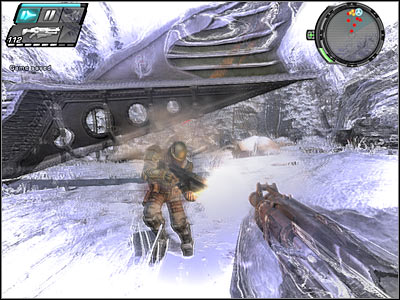 You should be using the sniper rifle all the time, however if you don't want to waste too many bullets, you may also consider combining a standard machine gun with a slow-motion feature. Make sure that you've secured this surrounding area. Once this is done, start moving forward. Collect a few weapons. After that, turn left and head on towards an ATV. 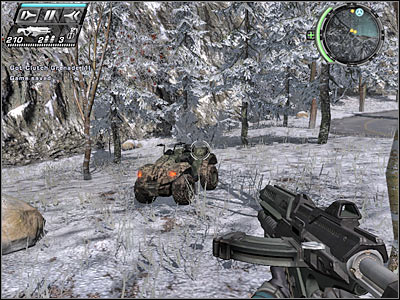 You will have an opportunity to use an ATV to travel to the next area of the map. Approach it and press the X key. Take your time to familiarize yourself with the steering. You will be using the cursor keys, as well as the SPACE key (for nitro). I'm sure that you won't have to spend too much time here, especially if you have played one of the "Half-Life" games in the past. You won't have to use the nitro all the time. Head on to the main road and start moving towards your new goal area. You won't encounter any units right away, so you may consider speeding up a little. 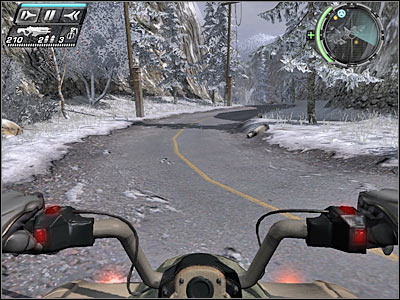 Keep heading forward. You shouldn't make any unnecessary stops. Like I've said before, you won't encounter enemy units here. Stop the atv once you've reached a larger bridge (screen). Your suit will probably inform you that the bridge is highly unstable. As a result, start off by saving your current progress, because it's going to be very easy to die here. 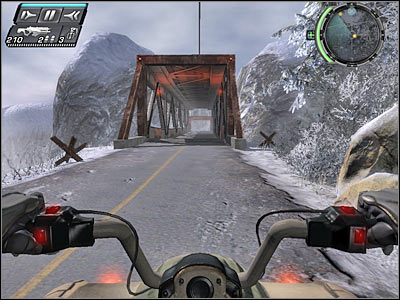 Start moving towards the bridge. Once you're on it, press the SPACE key in order to activate nitro. You will also have to activate a time stop function here. This will allow you to prevent the bridge from collapsing and it would be equal to a painful death. If you've pressed the button too late, you can also try and go back in the time. Either way, you will have to reach a new road. Save your game there. 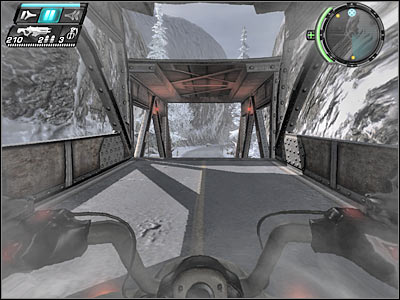 Keep heading towards your current destination. You will have to leave your vehicle very soon, because there's an enemy outpost nearby. I'd strongly recommend hiding behind some of the larger boulders (screen). You can find them to your right. If you don't want to risk too much, you can activate one of your powers in order to increase your chances of not being spotted. 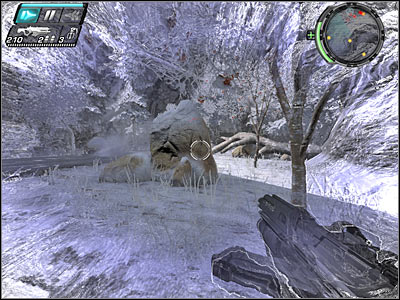