Start off by familiarizing yourself with the first mission objective.

You will have to be move forward. I'd strongly recommend hiding behind the main pillar. There are some enemy soldiers to your right. It's going to be very easy to surprise them. Just make sure that you're aiming at their heads. You should also be using a slow-motion mode in order to increase your chances of hitting them. Once they're dead, take their guns. 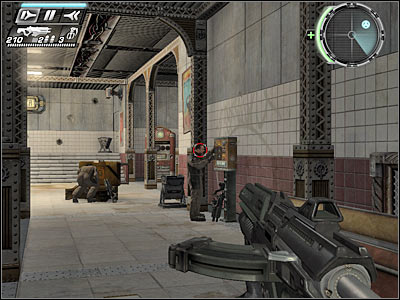 You won't have to explore the left corridor, because you won't find anything of interest there. Instead, go to your right. Once again, you will have to avoid receiving injuries from electrical discharges. As a result, activate a time stop option and head on to a safe area. 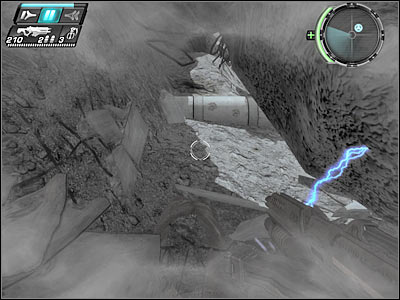 You will come across a destroyed section of one of the main streets of this city. As a result, you will have to climb your way up to the top. You won't be attacked by anyone here, so you won't have to look around while trying to reach your goal area. Once you're there, hide behind one of the containers (screen). 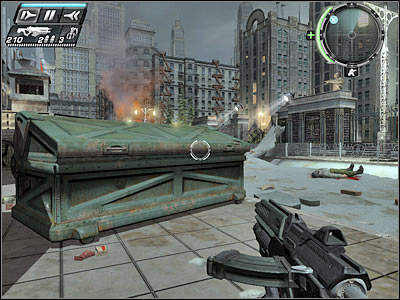 Start off by killing some of the closer enemy units. You should be using the container for cover. There's also an enemy sniper in this area (screen). It's very important that you take him out as soon as possible, because he's got a great view at the surroundings. It would be a good idea to stop the time here in order to increase your chances of hitting him. 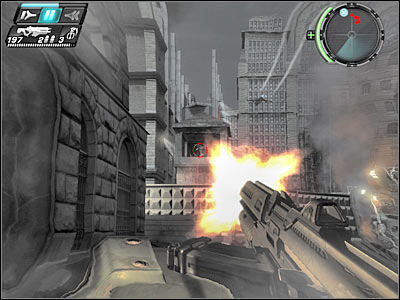 There's also a cannon nearby, but I'm sure that you're already familiar with how it looks. Thankfully, it's going to be very easy to neutralize the cannon, because there's an explosive barrel next to it (screen). Destroy the barrel and you'll take out the gunner as well. Once you've killed all enemy units, collect the ammunition and save your game. 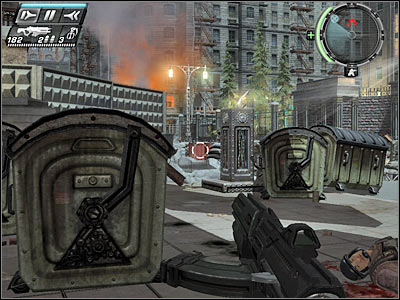 Don't use the cannon right away, because you wouldn't have anyone to kill. Instead, head to your left. There's a new road here. You will probably notice that enemy troops have appeared in the distance. As a result, quickly go back to the cannon and use it to kill your enemies (screen). Once they're gone, go there once again. This time you won't have to worry about anything else. 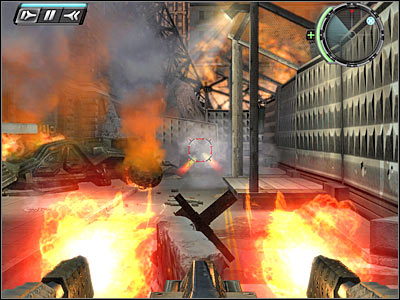 You will come across a few large containers. You must be extremely careful here, because the building to your right is being occupied by three enemy soldiers. They are currently occupying higher floors, so you may kill them from here. Make sure that you're using your suit to increase your chances of survival. Save your current progress. 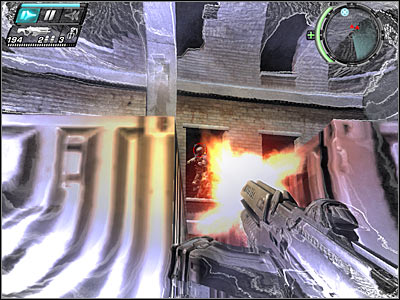