If you're a beginning player and are just starting your adventure with Thronebreaker: The Witcher Tales and at the same time you haven't ever played Gwent, then the advice and tips included in this chapter will surely help you in building a robust starting deck. In addition, this section has been enhanced with tips to help you command the presented deck.

Introduction to the deck and the cards 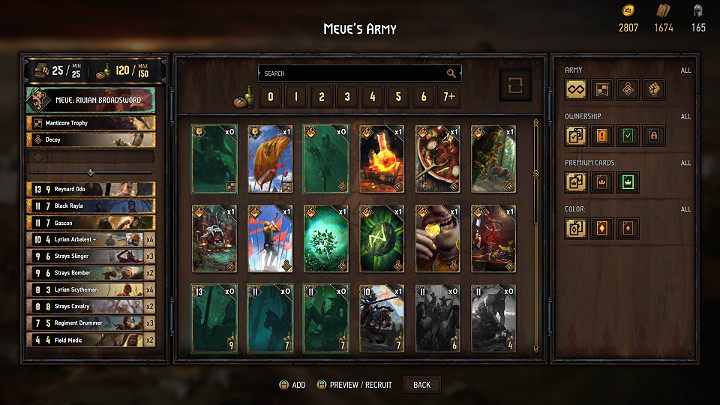 All the cards in this deck can be easily obtained during regular gameplay. Note, however, that some will only be available after finishing the chapter in Lyria. On the first map you can easily use the starting deck, which you have at your disposal from the very beginning of your adventure with the Thronebreaker: The Witcher Tales Below, there's a breakdown of the cards.

The weapon can inflict enormous damage upon your enemies After playing it, you inflict 4 points of damage on the target unit and all other enemy units of the same strength. Furthermore, the use of this weapon additionally activates the Loyalty ability for your units, such as Lyrian Scytheman and Lyrian Arbalest.

A trophy that inflicts 1 to 2 damage points to every enemy, who appears on the board. This will cause quite a lot of damage throughout the duel. What's more, by activating the additional skill of this trophy, you will move it to the second row, which in turn will strengthen the Gascon.

This is a very useful gadget with which you can withdraw key units, such as Raynard Odo, or Black Rayla. Sometimes you may be tempted to withdraw the Lyrian Arbalest, to be able to finish the enemy unit before it's able to activate its ability.

Raynard Odo is a very strong card itself - the score is 13. Beyond that, after being played, it awards 1 charge to all units that have used up their Order Hence, you're able to use the abilities of the Regiment Drummer or Black Rayla once again.

Extremely strong card, useful in every deck. Black Rayla has the skill that allows you to select any unit from the deck in the next turn and play it immediately. This will allow you to react very quickly to the changing situation on the board and you will immediately find an answer to the opponent's movement.

Gascon is a unit that's usually saved for the last round. At first, it has only 7 points, but it is strengthened by 1 point each time any unit is moved between rows. This is why we have Stray Slingers in the deck: to reinforce Gascon. Please note that if an opponent moves his own or your units, Gascon will also receive a boost.

A basic unit that has reliable statistics. What's more, this card will gain up to 7 points when you activate the Loyalty ability. By issuing several such units and activating Meve's weapon, you get a very big bonus to \your overall score.

This unit can deal direct damage to the indicated target (ally or enemy). The amount of damage depends on the number of allied units in a row, so you can do a minimum of 1 and a maximum of 9 points of damage. The Lyrian Arbalest is useful against the spies that land on your side of the board. More importantly, the Lyrian Arbalest deals 2 additional damage points after each use of Meve's weapon.

A unit able to set the given row on Fire. Strays Bomber is useful during long clashes in which there is a chance for multiple activations of the Fire effect. If your opponent starts to place units in a row free from the negative effect, you can always use Strays Slinger, to transfer selected units into the row that's on fire.

A unit that is able to move 3 units to another row and cause them 2 points of damage each. Strays Slingers are used to reinforce Gascon, but also to move enemy units to the row in which you have previously set Fire. Please note that if there are less than 3 enemy units on the board, you will have to move and injure your own unit.

Units that have a solid value of strength and are able to mark the chosen target. At the beginning of each turn, the marked target will take 1 point of damage. If you play a shortened version of the duel and there is only one round to win, the opponent will take even 10 points of damage from one Strays Cavalry.

This unit lets you summon another, Disciplined unit from your deck. In this case, you have a chance to pull out the Lyrian Sctyheman or Lyrian Arbalest and play this card immediately. Remember that after using the Order skill of this unit, you can reactivate it again with Raynard Odo.

The card does not have large statistics in itself, but has the ability to take a random ally out of the graveyard and plays it again on the board. The Vicovaro Medic are usually useful in the later part of a match.

If you've already learned the deck and the particular cards that consist in it, you should now learn how to conduct them in a game Skillfully playing units and adapting to the current situation on the board is the key to success in duels in Thronebreaker: The Witcher Tales 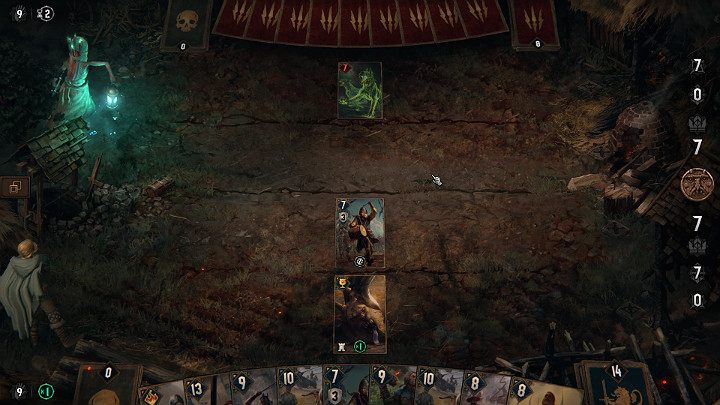 In the first round, play the units that you will be able to activate in the next round. You never know how your opponent will want to start a duel so keep your best cards for the next round. A good opening of the duel is to play a Lyrian Scytheman or Regiment Drummer. Do not play other units under any circumstances because you only waste their potential.

In subsequent turns, try to respond to your opponent's moves and eliminate the most important targets. Focus on units that have additional skills. Use Meve's weapon, when the enemy has at least two units of the same strength on the board, or when you have some Loyal units on your side (Lyrian Scytheman and Lyrian Arbalest).

There are many combinations in the deck that you can use during the duel. Playing the units properly will guarantee a huge increase in the overall score. Try to use the following card combinations: 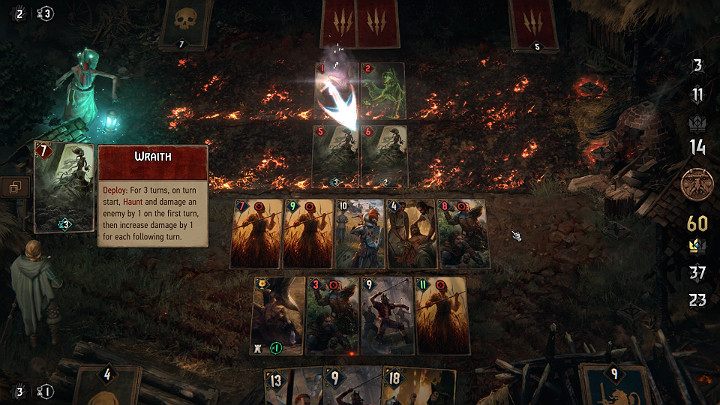 By following the above rules and tips you can easily dominate your opponent and create a great gap in the score. What's more, in some cases the difference will be so big that if you fold one round you will gain an advantage of 2 cards in your hand.