This first guide to the game Thronebreaker: The Witcher Tales discusses in detail the basics of the game. The player will find here not only general advice, but also information useful for exploring the world, conducting their own history, collecting loot and recruiting troops. The player will find out where to get recruits from and how to deal with the inhabitants of the kingdom. All this information has been additionally enriched with a handful of useful tips and tricks that will make gameplay easier.

Before you start your adventure in Thronebreaker: The Witcher Tales and lead your own army to meet the Nilfgaard invaders, it's a good idea to spend some time and learn some general advice that can contribute to your win.

If you made a mistake while making choices related to the story, you can still undo it. Wait until the narrator has spoken about your choice and if you don't like it, minimize the game and turn it off. What is very important, you have to do this before you go to the game view because then the progress of the history will be saved automatically. When you restart the game, you will be able to load the previous progress and resolve the issue differently.

Remember that when you take the chapel, the increased morale of the army will only survive one skirmish. After the fight is over, the morale will return to neutral status. More information about army morale can be found later in this guide in the chapter dedicated to this issue.

3. Talk to every character you meet

Take a moment and try to talk to every character you meet on the way. Sometimes you will have to listen to all the issues, but it may be worth it. Some people in the kingdom will offer you a small donation to lead an army, others will give you a piece of a card or a map leading to the treasure, and others will want to join your army.

During the story fights, try to focus on achieving your goal. Sometimes it's not worth fighting with the whole army if it's enough to defeat the commander to force his army to surrender.

Losing a round in Thronebreaker: The Witcher Tales doesn't mean losing the war! Sometimes it's a good idea to fold a turn and let the opponent win to start the next round with a better position and an advantage of cards in the hand.

If you initiate a fight and start first, expose to the battlefield a unit that will have a chance to activate your skills in the next round. Avoid playing units that cause a specific effect, such as the biases attacking enemy units. Keep the ranged units until there are targets on the board.

7. Pay attention to the type of fight

Sometimes the fight will be limited only to winning 1 round, so get to know the rules of the duel before making any decision.

The main interface in Thronebreaker: The Witcher Tales includes a lot of important information that will allow you to make the right decisions during the game. What's more, here you'll find shortcuts to the most important features of the game, such as entrance to the camp, a map of the world and access to combat reports. 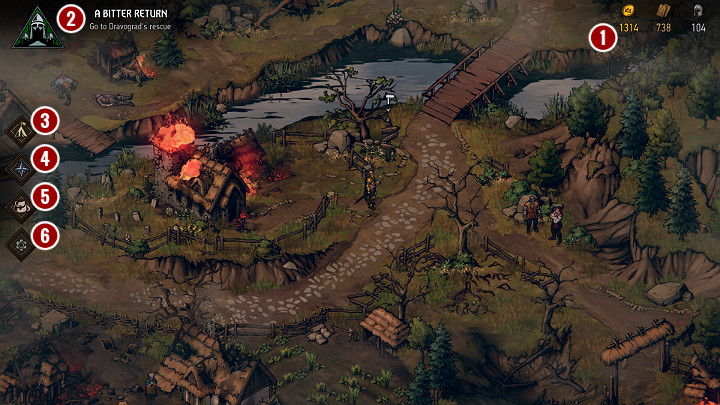 As you traverse the vast world of Thronebreaker: The Witcher Tales, you will perform many activities that are not just about fighting the Nilfgaard invader and collecting loot. Your task will also be to make important fictional decisions, as well as to manage the kingdom and manage resources wisely. Moreover, in the role of Meve, Queen Lyria and Rivia, you will sometimes have to decide on the life or death of your subjects and resolve their conflicts. 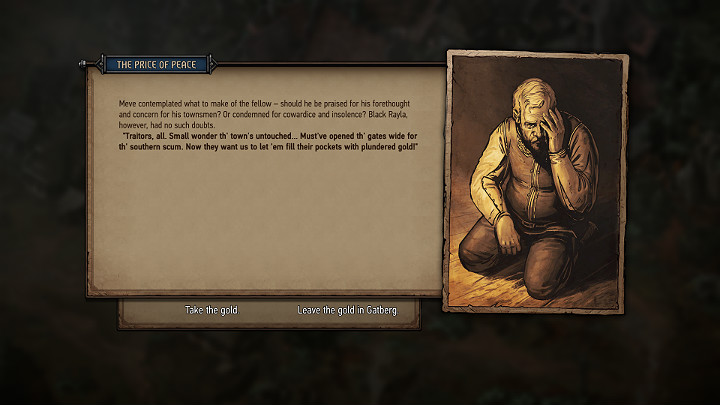 Thronebreaker: The Witcher Tales, allows the player to direct the story by making the right decisions in the plot. When choosing the appropriate options, you can be guided by your own preferences or the good of the kingdom and its subjects. You can be gracious or extremely harsh. You can save the lives of villagers, traitors and even the enemy. On the other hand, you can also condemn everyone to death. But know that every decision you make will have some irreversible consequences, which will sometimes be very surprising. It is worth mentioning here that some situations will not be a good solution and you may have to choose the lesser evil. Before making an important fictional decision, think carefully, because you will not have the opportunity to correct your decision. 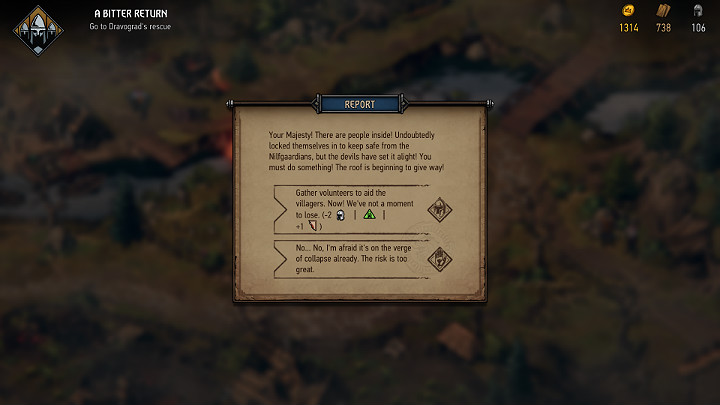 As you explore the world of Thronebreaker: The Witcher Tales, you will have to respond to the requests and grievances of villagers who have suffered from the situation prevailing in the country. Some of them have lost all their belongings and will claim compensation, while others will find themselves in a collapsing building and will expect your help. But nothing comes for free.... 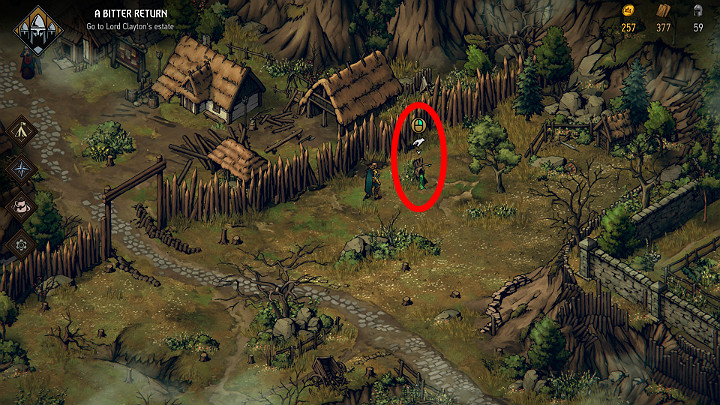 As you move around the map, look for green ribbons that hang from everything you can pick up. Look for tree trunks, crates, carts and other storage sites where you can find valuable raw materials. When you find yourself near a source of raw materials, you will notice an icon in your hand that indicates that items can be lifted. 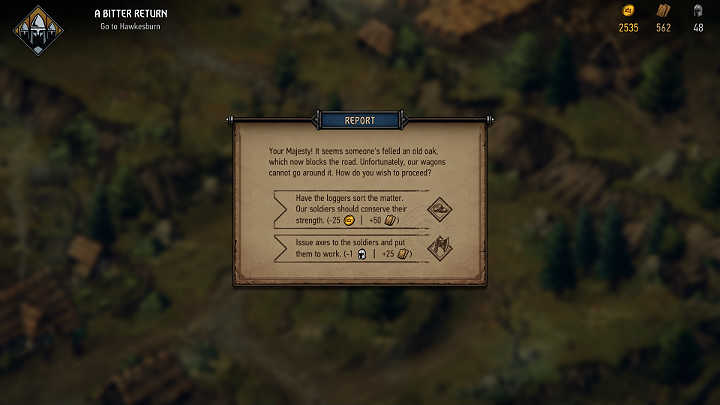 As with decisions to support the kingdom's inhabitants, overcoming field obstacles requires a certain amount of resources to be sacrificed or will have a negative impact on the morale of the army. Some problems can be solved using gold and wood, but others will require the sacrifice of several recruits from your army. 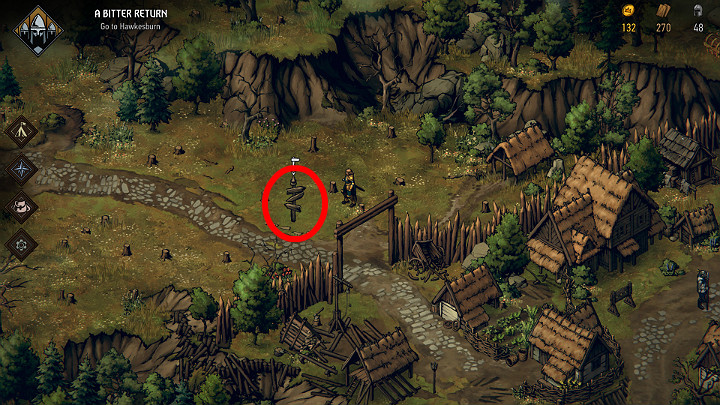 Use the signposts to quickly navigate through the map. To do this, just open the map of the world and click on one of the signposts marked earlier. After a short while, your character will move to the indicated place without the need to walk there on foot. 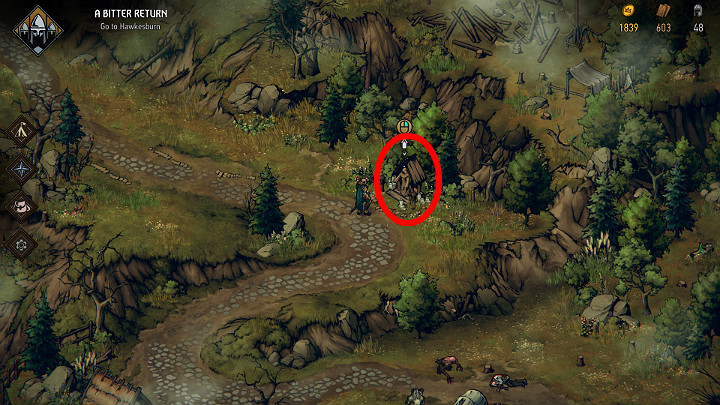 The Shrines provide a bonus to the morale of your army. By clicking on the shrine, you can get +1 point to the morale, which will allow you to increase the satisfaction of the troops, and this in turn will translate into their statistics. More information about army morale can be found later in this guide in the chapter dedicated to this issue. 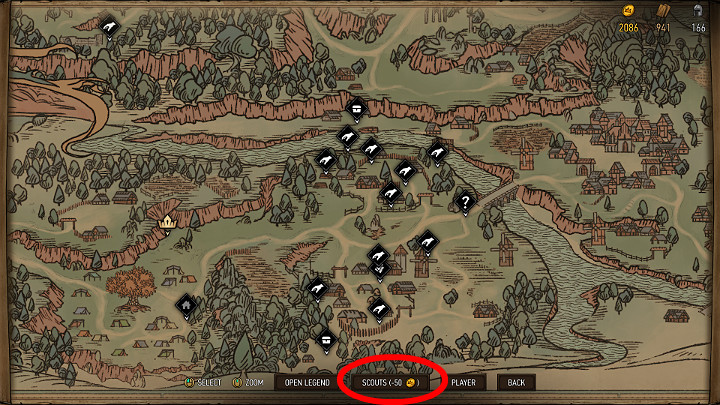 At the beginning of the game, the map in Thronebreaker: The Witcher Tales has very few markers. The player himself has to find raw materials, puzzles, places of skirmishes or other interesting points. Scouts come here to help, as they are able to check the surrounding area and put specific markers on the map. With this information, the Player can plan his further journey and be sure that no potential loot will miss them. 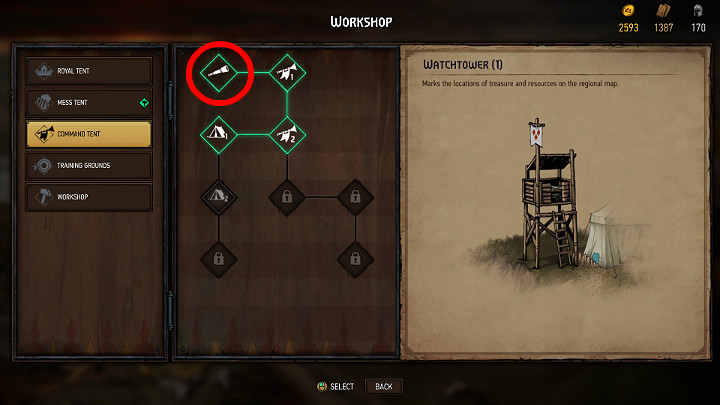 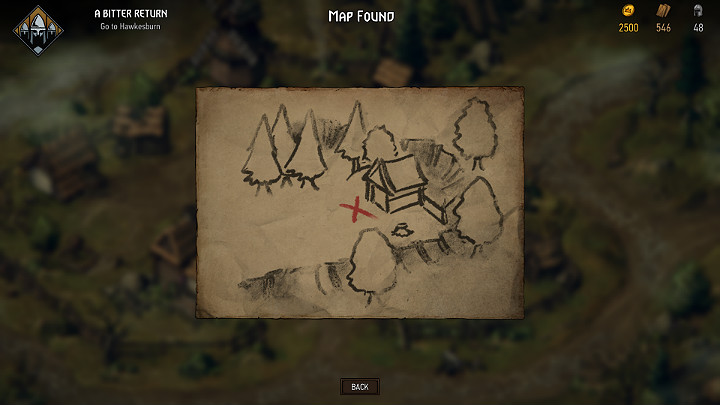 For the help, Meve can receive treasure maps from the inhabitants of the kingdom. These in turn have marked points where you can find a chest with valuable loot. Places marked on the map are very characteristic, so it is hard to miss them while wandering around the map. 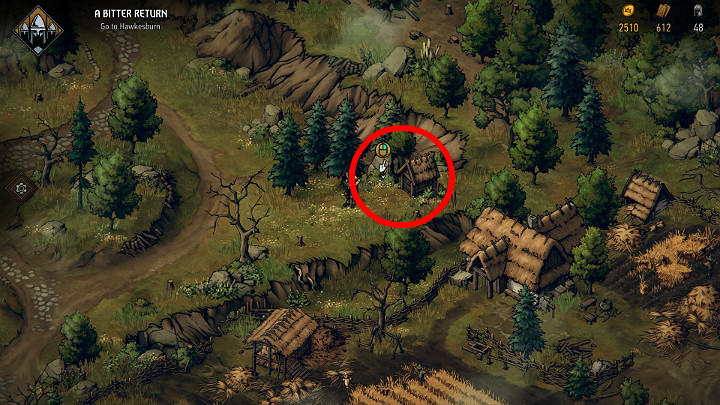 When you are near a marked area, a spade icon will appear in the area. To get the treasure just click RMB in the designated place. After a short while your eyes will see a treasure chest.