The guide to Thronebreaker: The Witcher Tales game discusses the most important functions of this title and helps you to learn its rules. The first chapter of this guide explains in detail the basics of the game, such as exploring the world, loot, resources and treasures. In addition, the first chapter describes how to use the world map and send scouts for reconnaissance. The next chapter is devoted to the raw materials available in Thronebreaker: The Witcher Tales. All available raw materials are described in detail here and tips on how to get more gold, wood and recruits are added. The next chapter of this guide is devoted to the camp, the strategic location of each army. The penultimate chapter of the guide to the game Thronebreaker: The Witcher Tales focuses on the fundamentals of deck-building in order to bring the Player closer to the process of creating an invincible army. The last chapter is devoted to combat. All aspects related to it are discussed here, such as: description of the battlefield, rules of the fight, use of tactical advantage.

The guide to the game Thronebreaker: The Witcher Tales contains:

About Thronebreaker The Witcher Tales Guide 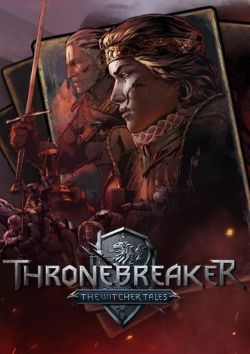 Thronebreaker: The Witcher Tales takes place before the events depicted in the games developed by CD Project RED. The main protagonist is Meve, the queen of Lyria and Rivia. During the game, the players can witness her actions during the second war with Nilfgaard. The players can also meet a variety of non-playable characters and make decisions that will impact the story and its finale.

In Thronebreaker: The Witcher Tales, the players are traveling through a world map shown from an isometric perspective. There, they encounter new characters, participate in duels (they take the shape of Gwent matches), and complete side and main quests. While exploring the map and completing quests, the players are obtaining unique items and new cards that can be added to their decks. Resources that can be used in special camps are gathered as well. With them, the players can construct new buildings, recruit units and equip the main protagonist with new weapons. Potential soldiers can be also recruited during the missions and by making specific choices in the dialogues.

Thronebreaker: The Witcher Tales features two-dimensional graphics with a strong comics-like style. A large part of the dialogues was dubbed by actors. The developers also created animated cutscenes.