ThimbleWeed Park is a spiritual successor to classic LucasArts games that were released in the eighties. It is a title developed by independent studio led by Ron Gilbert and Gary Winnick, two legendary creators of cult adventure games.

In this guide you will find a complex walkthrough which explains in detail how to complete the game. Here you will find solutions to all puzzles on the highest difficulty level. The walkthrough is divided into chapters that make navigation and finding specific points of the game easier.

The guide to Thimbleweed Park contains: 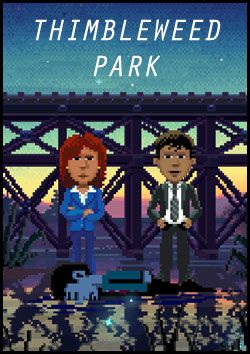 Thimbleweed Park is an old-school point & click adventure game, which pays tribute to classics developed by LucasArts and released at the turn of the 1990s, such as Maniac Mansion. Thimbleweed Park was developed by an independent team led by two veterans of the industry – Ron Gilbert and Gary Winnick.

The titular Thimbleweed Park is a town the game is set in. It was once a prosperous business area, but today it is definitely past its prime – not a particularly lively place, which exists without a good purpose.

What also builds the atmosphere in Thimbleweed Park are the five playable characters. At the very beginning, the player is acquainted with two detectives called in to investigate a case of a body found in a river just outside the town. The third character – Dolores, gets acquainted with the testament of her rich uncle. A clown called Ransome, who wanders around a devastated circus suffering from a curse that makes them unable to get rid of the make-up and clothes is the fourth figure. The last character is called Franklin – he wakes up on the 13th floor of the Edmund hotel in Thimbleweed Park, and to his surprise, discovers that he is actually dead. The player can switch between the characters at any time. The game offers many endings, hundreds of locations for the player to visit, as well as two difficulty levels.

What makes Thimbleweed Park an old-school game are both its pixelated, 8-bit graphics and an interface resembling the 1980s' products. This site is not associated with and/or endorsed by the Terrible Toybox or Terrible Toybox. All logos and images are copyrighted by their respective owners.