Together with the release of version 1.0, They Are Billions delivered a full-fledged story campaign. It consists of 50 missions completing which, depending on the difficulty level and willingness to complete all the goals, can take up to 60 hours. However, before you accept this time-consuming task, you should read some information that will greatly facilitate the gameplay - you will find them in this section. 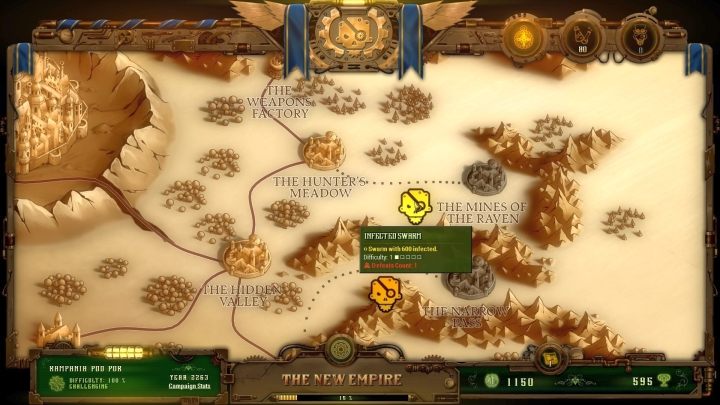 Missions are selected using the campaign map. Here you can also check the campaign completion level, adjust the difficulty level, as well as develop the hero and new technologies.

The story campaign in They Are Billions is available from the start - unlike the maps in survival mode, you don't have to unlock anything here. At the very beginning of the campaign you can choose between two characters. This are Caelus and Calliope. Caelus is a well-armored unit that is capable of withstanding quite a few enemy attacks, while its attacks allow you to eliminate most enemies with one shot and injure multiple targets at the same time, although its attacks are slow. Calliope, in turn, is a character with little health, which must remain in motion all the time, however, this is compensated by a very high speed of movement and high rate of fire. Hero selection is a key aspect - most of the missions will only be played with this unit (with occasional support from other units). It should also be remembered that these characters can be developed by increasing their parameters - damage, health, and armor.

Missions in the campaign are divided into several types. These are:

Before launching the campaign, you should get acquainted with a handful of tips that have been prepared for You. Namely: