This guide for The Wolf Among Us is a richly illustrated walkthrough of all in-game episodes. It contains detailed description of all decisions and their consequences, conversations, and various characters. Players interested in adventure games from Telltale Games will find here some valuable information about the newest game of the studio.

The Wolf Among Us is another game from Telltale Games Studio - creators of The Walking Dead. That exciting, filled with puzzles game has found a warm place in the hearts of players from all around the world. The Wolf Among Us lets players follow the steps of Bigby Wolf, the sheriff of Fabletown - a district of New York, where characters from well-known fables created their own community and fight for their rights. Thanks to Glamour spell they can take human form and inconspicuously merge into real people's world.

The Wolf Among Us guide contains:

About The Wolf Among Us Game Guide

Hot Topics of The Wolf Among Us Game Guide

The Wolf Among Us: A Telltale Games Series Video Game 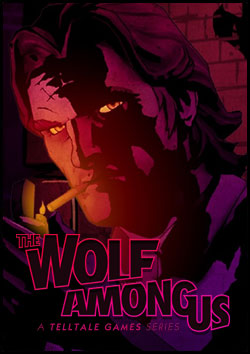 The Wolf Among Us is a five episode series from the creators of the 2012 Game of the Year: The Walking Dead. Based on Fables (DC Comics/Vertigo), an award-winning comic book series, it is an often violent, mature and hard-boiled thriller where the characters and creatures of myth, lore and legend are real and exist in our world.
As Bigby Wolf - THE big bad wolf in human form - you will discover that the brutal, bloody murder of a Fable is just a taste of things to come, in a game series where your every decision can have enormous consequences.
- Your choices matter: it’s not only WHAT you choose to do that will affect how your story plays out, but WHEN you choose to do it
- A mature and gritty take on characters from fairytales, legends and folklore who have escaped into our world. These are not the characters you’d see on a little child’s lunchbox.
- Play as Bigby Wolf: formerly the most feared monster among the Fables, now Sheriff of Fabletown and protector of those he used to hunt. He must restrain the beast within if he is to earn the trust of those around him.
- Choose Bigby’s actions carefully. Will you approach a situation calmly or unleash your inner rage? The way you act will determine how others respond to you.
- Set before the events seen in the first issue of the comics – you don’t have to know the characters or the world to play!

The Wolf Among Us: A Telltale Games Series - Season 1 PC version System Requirements

More About The Wolf Among Us: A Telltale Games Series - Season 1

Honest Games for Android  Pay Once and Play All You Want

The mobile market is dominated by free to play productions, some of which can really be dishonest. And what if F2P doesn't suit your taste? Well, there's quite a few great productions, which you pay for once and can play them like a human being.