This guide for The Witness will provide you with all information necessary to complete this difficult logic game. Simple solutions to puzzles is not the only thing that you will find here. Predominantly, this guide includes descriptions of all the rules that govern individual puzzles, thanks to which you will be able to find a solution for the majority of them, without pondering on the rules. Of course, even if some of the puzzles turn out to be too demanding, in spite of hints, you can find exact solutions for them in this guide. The text also provides exact whereabouts of audiologs hidden in the world of The Witness, thanks to which you learn about the mysterious storyline of the game. The Witness is an adventure game with sophisticated logic elements, developed by the author of Braid and his Number None studio. The game takes place on a large mysterious island where, for unknown reasons, all people disappeared suddenly. The game is about exploration of the extensive world, solving puzzles, as well as about finding various traces and clues thanks to which you will be able to solve mysteries of this world

The Witness in a nutshell

The Witness is an adventure game with logic elements. The game is a spiritual successor to the Myst series. The game was developed by the creator of Braid and his studio, Number None.

The Witness is set on a large island. For some reason, all of its inhabitants have disappeared. The game focuses on exploring the island, solving puzzles and finding hints that will help you discover the secrets of this place.

The action is presented from the first-person perspective. The core of the game is to explore the island and solve puzzles. The Witness requires good perception and the ability to make connections. There are no tips here. You need to find and connect all pieces of a puzzle to solve it.

You are stuck but you want to solve a puzzle yourself? Below you can find a few tips that will help you do that.

If these tips aren't enough, check out the chapter dedicated to general hints.

The entire island is divided into smaller locations. Each one of them has puzzles that require you to use certain environment elements or a perspective. Our guide has walkthroughs for all the locations.

Some of the secrets are in places in-between locations or after fulfilling specific requirements.

The Witness runs on a 3D engine, but the graphics are rather simplistic. Thanks to that, the game has low system requirements.

About The Witness Game Guide & Walkthrough 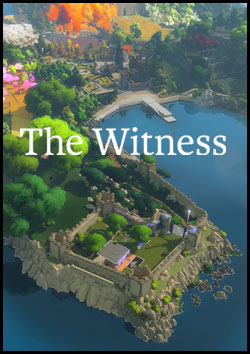 The Witness is a first-person adventure game that puts emphasis on solving puzzles, which is similar in this regard to the classic logic-adventure games series entitled Myst. It was created by independent studio Number None founded by Jonathan Blow, who previously developed one of the most interesting logic platform games in recent years – namely Braid, released in 2008.

The game is set on a pretty large island, which you can explore freely in search of puzzles to solve. The island is very mysterious and, despite many traces of someone’s presence, seems completely deserted.

The Witness uses FPP view, and the gameplay focuses on exploration (on foot or by boat) of every nook and cranny of the island, finding various hints, and solving logic puzzles in order to lower a bridge, activate a mechanism, open a door, etc. As you explore the island, you have to prove to be remarkably patient, observant, and able to connect seemingly unrelated elements of the story. Many things here have a secret meaning, and the key symbols, hints and markings that let you push the plot forward are smartly hidden within the game’s environment.

More About The Witness This site is not associated with and/or endorsed by the Thekla, Inc. or Thekla, Inc.. All logos and images are copyrighted by their respective owners.