Superior Wolven School Gear - focuses on a mixed type of play. . Each element of the gear gives bonuses to Adrenaline, strength or sign intensity. In order to obtain schematics for this set, it is best to equip oneself with two maps: Damp, Modly Notes by Hieronymus on the Witcher Elgar and Heavily Faded Notes by Hieronymus on the Witcher Elgar You can buy them from an armorer in Kaer Trolde and an armorer in Novigrad square. 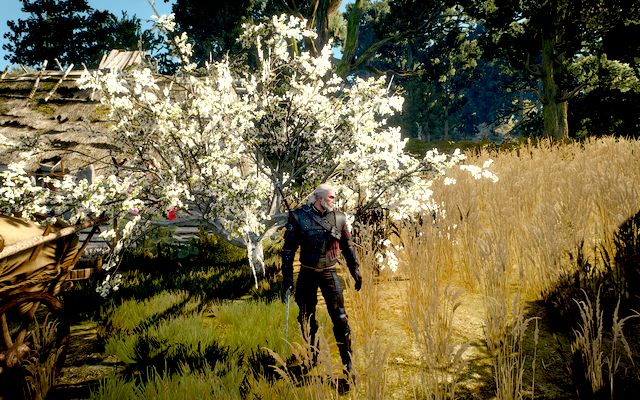 Location: Skellige - monsters lair in the small town to the southern-west from Fyresdal 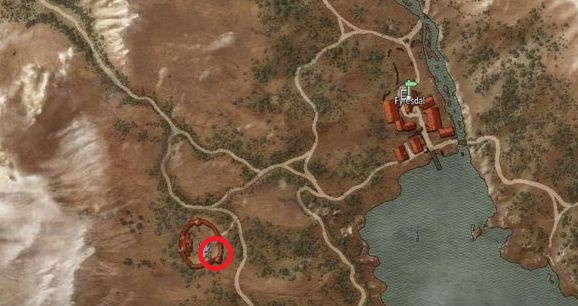 Schematic for the superior armor can be found by the monsters lair (harpies nest) to the south-west from Fyresdal (Kaer Muire area). 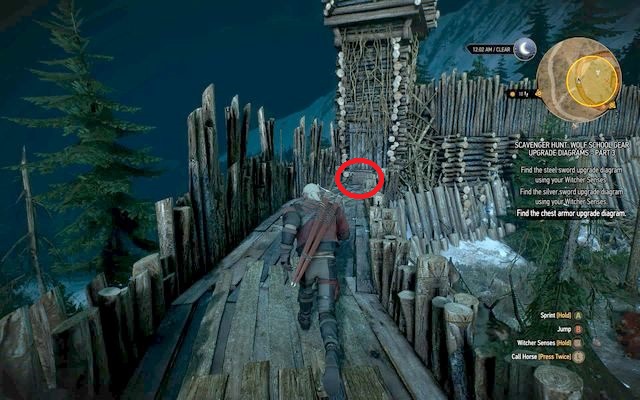 You will have to climb on a wall of the town. You can get to its top from either side of it. Go along the wall until you find the chest with the diagram.

Location: Skellige - eastern island Hindarsfjall, to the west from Lofoten 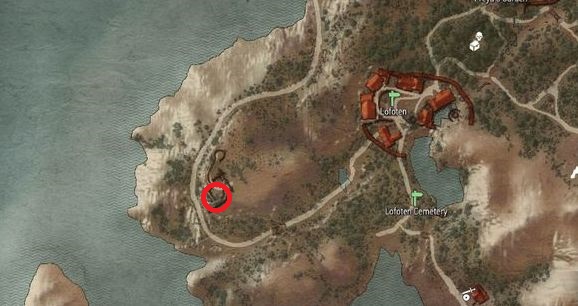 On the Hindarsfjall, to the west from Lofoten you will find the ruins inhabited by an ice troll. You can avoid fighting him though. 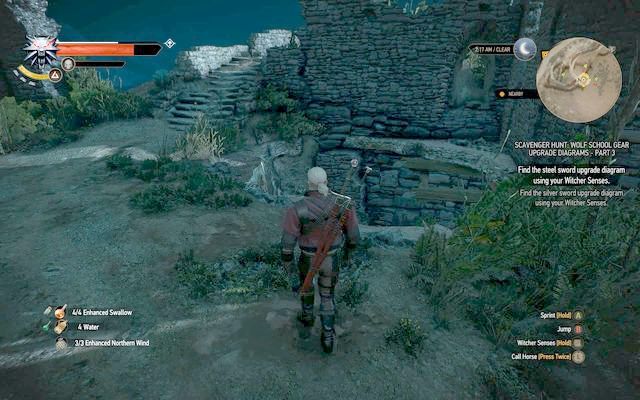 Jump down through a massive hole in the ground. In the basement you should watch out for toxic fumes inside. You can rid of them by lighting them on fire. The chest with the diagram for the steel sword can be found by the wall to the left.

Location: Skellige - basement located to the southern-west from Arinbjorn 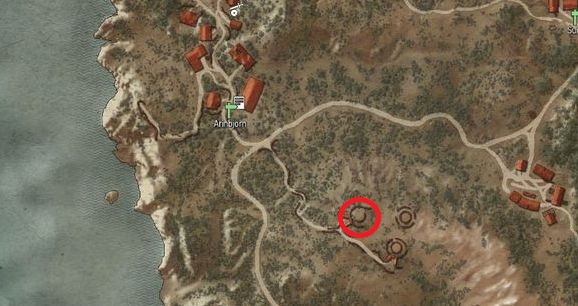 To the south-west from Arinbjorn a small basement is located. Some wraiths are wandering around it. 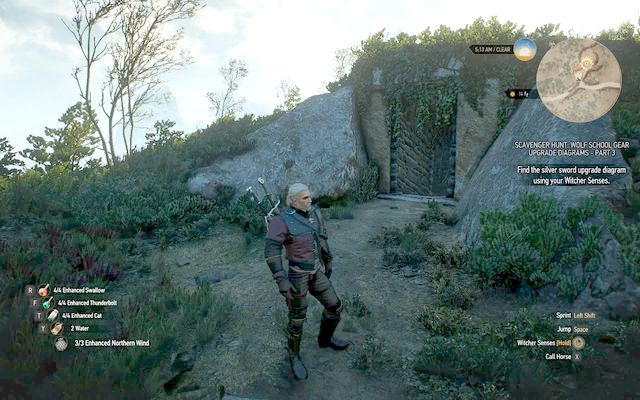 Enter the basement and find a small box. There is a silver sword schematic inside.

Location: Kaer Morhen - eastern edge of the river going south from Kaer Morhen, in the cave 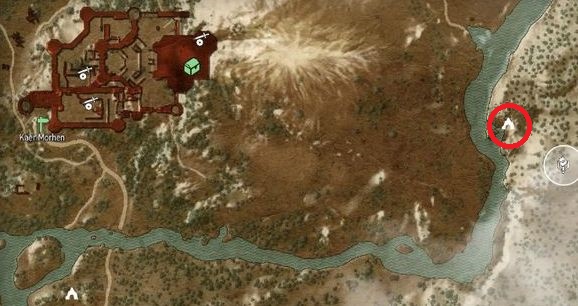 A bit down the road from Kaer Morhen stronghold a river flows. You should swim in it along with the current. By the edge of the map you shall find an entrance to a cave. Climb on the rock to the right. 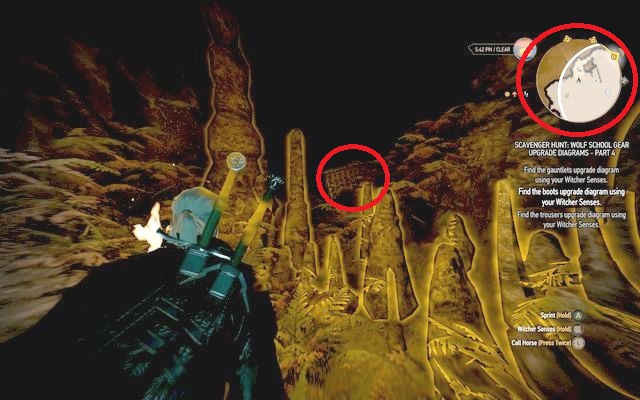 After jumping off the rock, into another, bigger cave you will come across a group of Endrags. The chest lies more or less in the middle of the wall to the right in the bushes, behind a big stone pillar. Destroy the stalagmites with Aard to get to the box with the schematic. 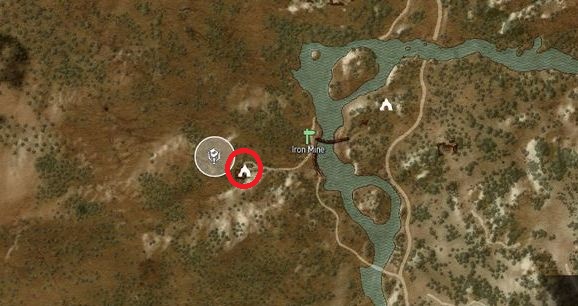 To the south-west from Kaer Morhen, by the river there is an entrance to an abandoned Iron Mine. Enter it and fight an earth elemental (30 level). 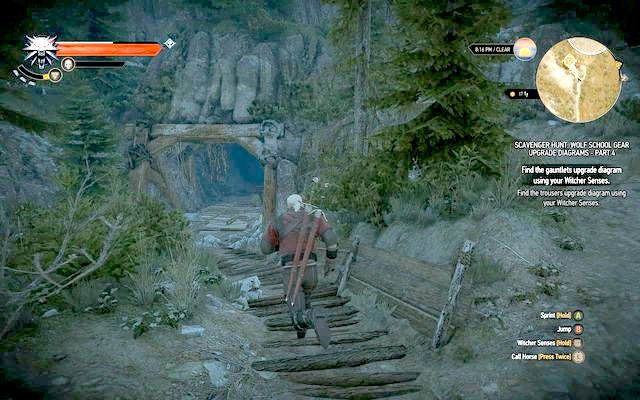 Entrance to the mine

You can't avoid the fight. Help yourself with Quen, dodges and dimeritium bombs. Schematic lies in a small box on an altar.

Location: Kaer Morhen - witcher's laboratory in the cave at the very end of a path to the north from Bastion 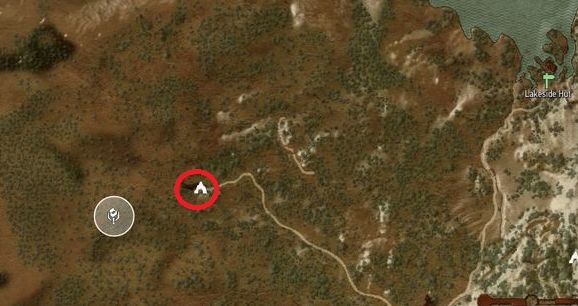 There is a path coming out of Kaer Morhen which leads to the north from Bastion. You may encounter some harpies on your way through it. There is also an abandoned laboratory in the nearest cave. 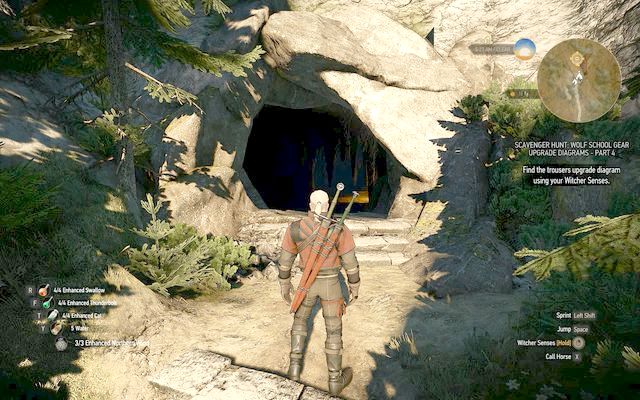 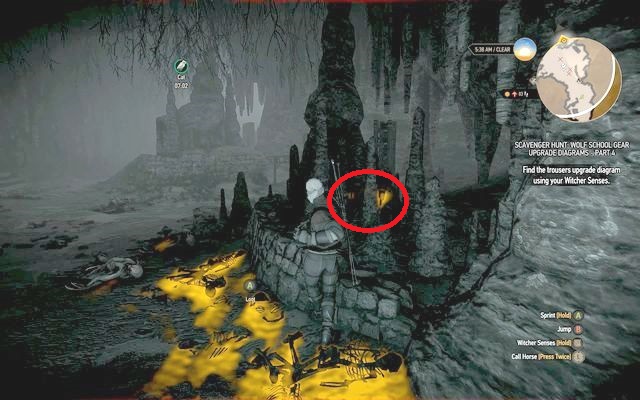 There are some nekkers in this cave as well as a rotfiend. The chest with the diagram lies in a place with apparatus in the middle of the cave, behind the stalagmites (break them with Aard).