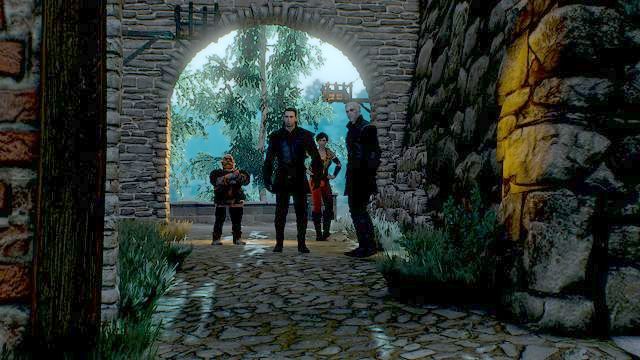 Together with your team go to Borsodi's auction house

In this chapter you will read about the continuation of the quest after you recruit all members of the robbery. Once you gathered the crew, go back to the meeting place in the basement at the herbalist near Oxenfurt. What's important, the decision about recruiting Casimir or Quinto cannot be changed. You will go for the robbery and after a cutscene you will find yourself in the attic of the auction house.

On the lower level you will have to fight four enemies. The catch is that you will be equipped only with a wooden sword and clothes that aren't protecting you well. Defeating two guards will be enough, so gang with other team members and attack the most beaten enemies. 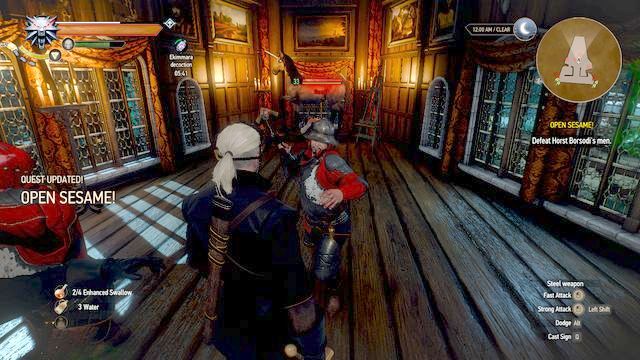 You must face the guards while having only the wooden sword

The next phase during the cutscene is negotiations. For negotiations to end successfully, select the first option to not release the hostages and start giving conditions. You must demand a car with horses. When the next question is asked, select the second option ("standard" vehicle). If you have recruited Quinto, a third question from the negotiator will occur as well - release one hostage after that and you will avoid fighting the guards. If Casimir is in your crew, then the negotiations won't matter, the explosion will make the enemies attack you anyway. First eliminate two helpers of the negotiator because it will be easier for you and Ewald to attack the last opponent (he has a shield) from two sides - one of you will parry his attacks, the second will attack him from the back.

After the negotiations, no matter how they go, Eveline will leave you. You and Ewald will go to the vault. Reaching the safe, depending on selected crew member, might be safe or you will be caught in a trap. Quinto will open the door with a lockpick which will activate a trap and force you to fight few spiders (Arachnomorfs). Then you will be taken out from the trap. Casimir can blew up the safe and open a clear passage without activating the trap. 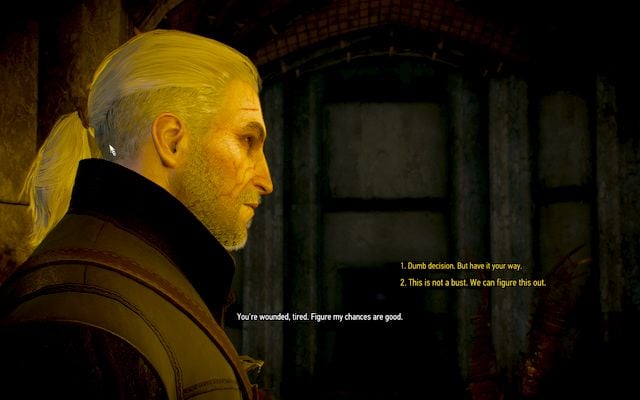 You must pick the side of one of the brothers, but the battle with the second one isn't mandatory

Inside the safe you will find many valuables, not only in chests but in packages as well (usually in form of small coins, jewelry and jewels. Behind the next door you will meet Horst Borsodi. You must decide whose side are you on (you can't remain neutral) - Horst's or Ewald's. Now a battle will occur during which you will face one of the brothers. You must deal only few hits to the key character, you don't need to bother with other opponents. What's important, your associate will also pick a side (Quinto will be on Horst's side, Casimir on Ewald's side). 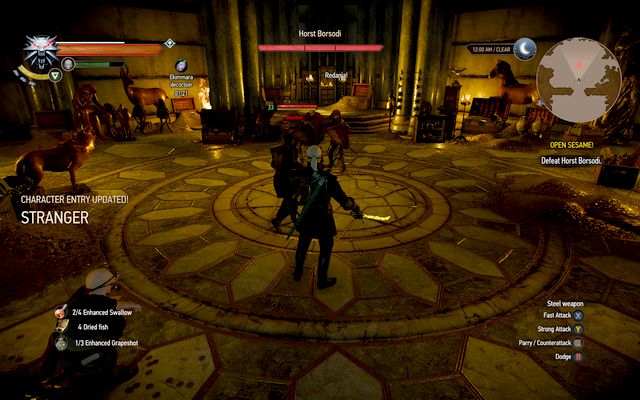 Attack only the main target - one of the brothers

Once the battle ends, no matter which side you picked, you can get rid of the second brother or make a deal. Both options lead to the same outcome - you will be able to collect the remaining contains of the safe and return to the questgiver with the story item. 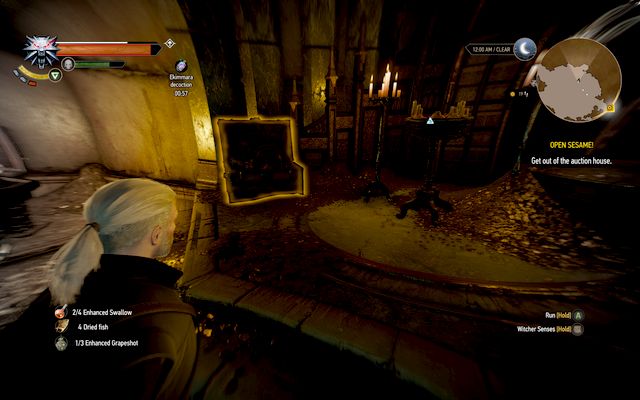 Near the pillar, left from the location of the Maximilian Brody's House (story item) you will find a chest with diagram for Viper Venomous Steel Sword and, next to it, in a chest near the pillar - Ofier Crossbow. What's worth mentioning, none of the brothers have anything valuable with them, so if you're not fond of fighting, you can resign from it with no consequences. 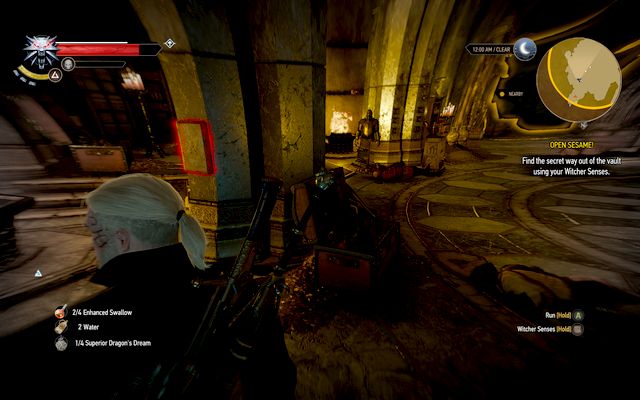 The pressure plate on the wall that opens the secret passage

If you want to make Olgierd happy - get rid of both brothers (especially since Olgierd will tell you that they both deserved death). Once you collect all the items from the vault, use the pressure plate on the pillar. This will open a secret exit from the building. Now go back to the questgiver in the Alchemy Inn.