The quest starts after finishing the first part of Open Sesame! quest. You will have to recruit one of the people who will help you with the robbery. You can choose from two people from which only one will help you during the quest. One of them is dwarf Casimir, the second is Quinto. After recruiting one of the merchants the quest will end. 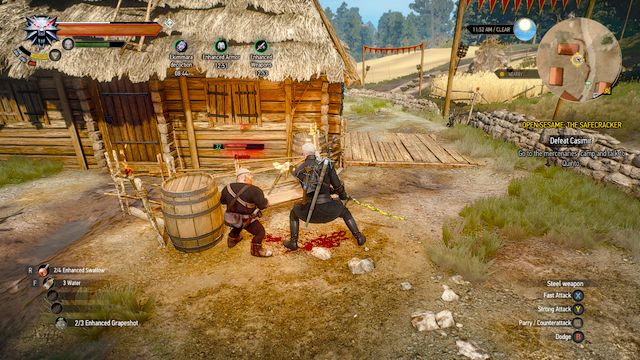 You will probably have to fight the dwarf, but at least he will no longer be a threat to himself

Once you reach the destination, which is the Alness village east from Novigrad, you will find Casimir (M1,16) there. He is attempting to commit a suicide. Be careful, there are many dialogue options and if you will not trigger a fight (not deadly), you can cause the Casimir to blow himself up. The safest option is to use Axii sign or the last dialogue option (offensive one). It will guarantee that the dwarf will join your team.

Important spoiler: Casimir will join Ewald side during the battle with Horst Borsodi in the vault. 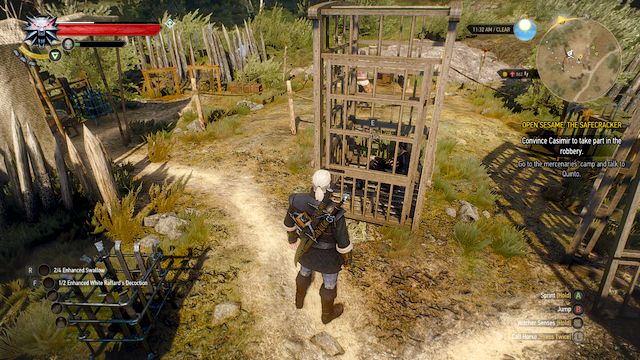 Quinto closed in a cage

Quinto is imprisoned in a cage (M1,17) not far south from the herbalist where you plan the robbery. In order to free him from prison, you have few options:

No matter how you free Quinto from trouble, he will now join your team.

Important spoiler: Quinto will join Horst Borsodi side during the battle with Ewald in the vault.