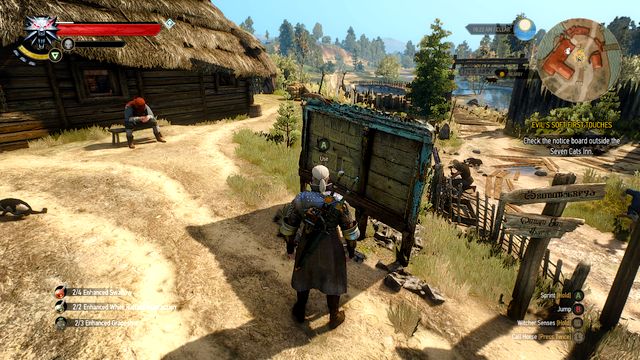 Notice board near the Seven Cats Inn

It's the first main quest you receive after starting the game. Near the Seven Cats Inn (M1,1) you will find a notice board. You can take this main and one side quest from there. Go to the northeastern part of lands east from Novigrad to a nobleman named Olgierd. He will give you the details of the quest which you will complete in Oxenfurt. 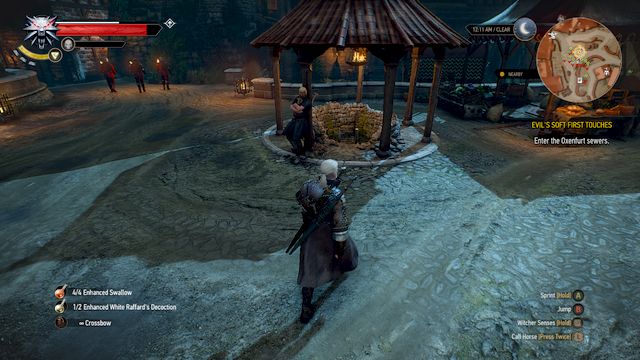 Entrance to the underground through the well on Oxenfurt's marketplace

After reaching the center of Oxenfurt you must find the entrance to the sewers located in the middle of the field, in the old well. Below you will be attacked by a drowner (level 30). After a while, behind the bar you will find Shani. Follow her after the conversation. 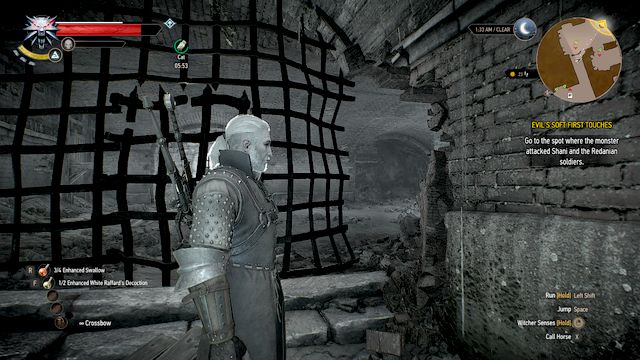 Destroy part of the wall to get through

You will find yourself in front of the bars. Hit the right edge of the bars with Aard sign. This will destroy part of the wall and will unlock the passage. After examining the monster's lair together, fall back a few steps and collect the key. This will allow you to open the bars on the other end of the corridor. On the lower level of the sewers you will find a large group of drowners which you must defeat. 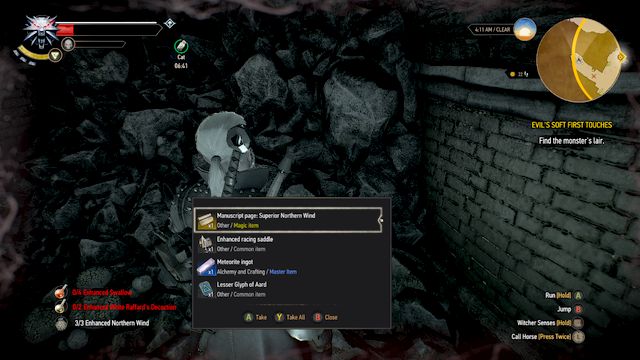 In the corner you will find a precious bomb diagram

In the south-western branch of the corridor you will find a closet with diagram for Superior Northern Wind bomb upgrade. Prepare yourself for a battle (proper equipment and meditation in order to replenish potions) and walk through the corridor behind the wooden door. An animation will trigger and once it ends, you will have to fight the boss. 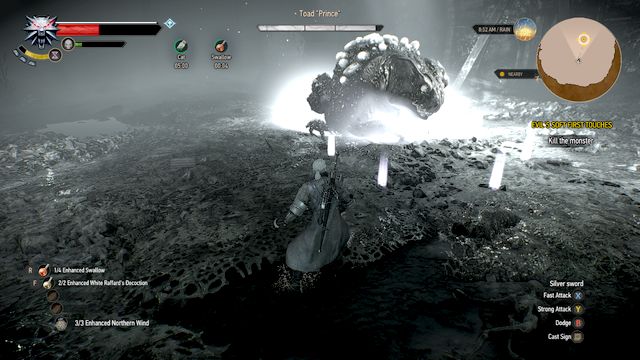 Your enemy is a giant toad - cursed prince. Depending on what skills you have been developing, you have two strategies to beat him. Use fire (Igni sign, Dragon's Dream and Dancing Star bombs) whenever you have an opportunity or focus on putting your sword to good use - Yrden will be helpful in the latter, the toad is very vulnerable to it. Northern Wind bomb will also slow it down temporary.

Main attacks of the beast are spitting acid, shooting acid from the back around the creature, regular jumps which makes it impossible to attack without Yrden and a very powerful tongue attack which can get through Quen sign and deal damage. 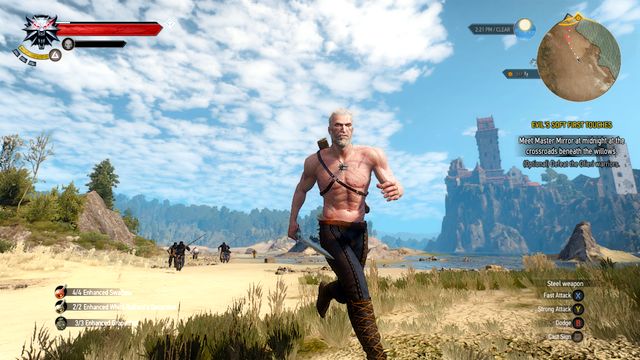 If you don't feel strong enough to fight, you can escape the Ofieri

After the battle and a short cutscene, the next phase of the quest will start. You will be moved to an island north from Novigrad and you will be attacked by a group of well equipped Ofieri (level 32). You will only have a sword to defend yourself. The battle isn't mandatory - you can quickly escape the battlefield if you prefer to. However, fighting the mage, a mini-boss, will allow you to gain additional experience. 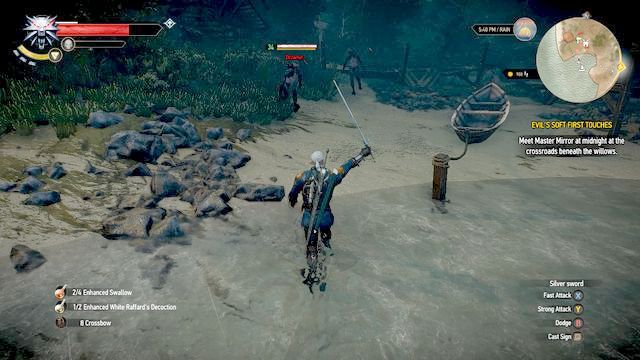 You can free the lighthouse and quickly transport to other location

It is wise to go immediately to the nearby lighthouse (Abandoned place) - a quick travel point can be found there, and on the penultimate floor of the building you will find the New Moon armor. 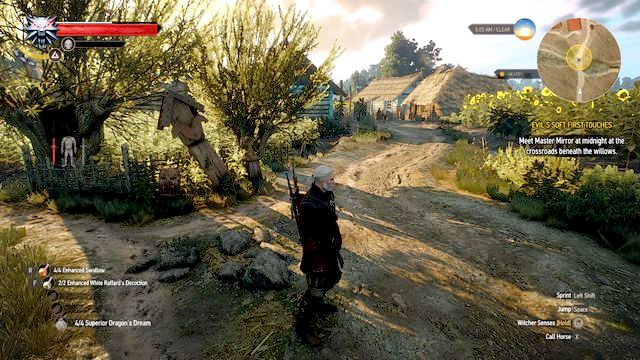 Wait till the midnight in the marked location

Now go near the Yantra village in the territory east from Novigrad and wait till midnight. After a conversation with the questgiver - Master Mirror - he will tell you to go back to Olgierd in his mansion. It's the last phase of the quest, during which you will face Olgierd. After the battle the quest will end and you will receive 450 crowns. 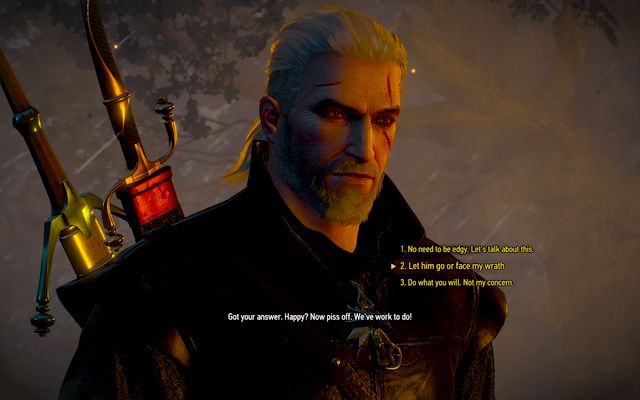 If you will try to save the life of the convict, you will have to face Olgierd

After arriving at the mansion you will find that it is on fire and that Olgierd's company is trying to kill one of their own. You can remain neutral (2 dialogue options) and simply "talk it over" and get directly to receiving the payment or you can decide to free the convict (first dialogue option). In that case you will have to face Olgierd.

It's the last phase of the quest. You will receive the payment which is 450 crowns and, after leaving the mansion - Von Everec's blood from Gaunter O'Dimm. 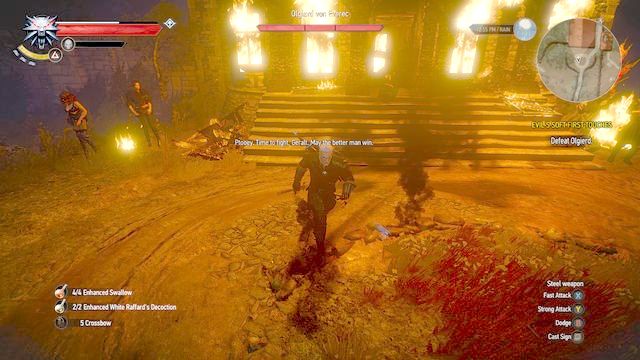 Olgierd is very fast, trying to keep parrying his attacks will always end in failure

A rather simple technique can be the key to victory. It consists of three quick attacks and jumping away, preferably to left or right side of opponent. You can initiate the attack even during enemy's string of attacks and will have a great chance for canceling his series. Many of your attacks will be defended, but you mostly wait for the moment when Olgierd will throw sand - after that he will be "resting" for a moment during which you can attack him with your strongest attacks. The most important thing is dodging when the enemy is performing a special hit (quickly moving as a "shadow") - you must avoid it at all cost as this hit can take even half of your health. Sadly, bombs and crossbow won't be of any use, similarly to signs - except for Quen and optionally Yrden.