On this page of The Witcher 3 Wild Hunt guide, you will find a walkthrough for all side quests related to the Faroe Island, Skellige. In the walkthrough, we explain where to find Timmon's family from the village of Harviken, how to have an honorable duel with Jutta, how to start an affair with her, and how to behave during a meeting with a guard in Trottheim.

The prize of honor

Near one of the huts in Harviken (M19,1) you will meet Timmon. He will inform you that part of his family is missing but he has no time to search for them as he is preparing a wedding. You can help him and check what happened to them.

Go to the north-eastern coast of the island. Defeat two sirens at level 13. Walk through the marked territory with witcher senses activated. Search for the body of a girl and then examine it. 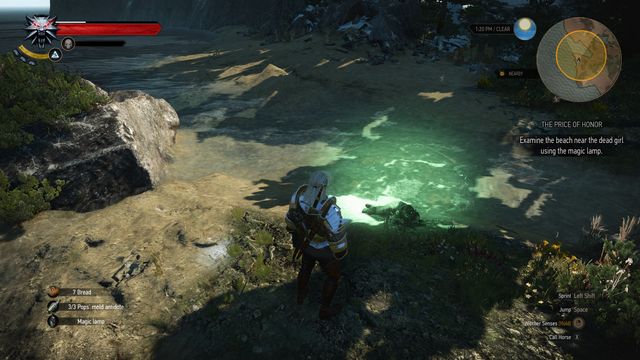 Use the magic lamp near the body of the girl.

To get to the next part of the quest, you must have the Magic Lamp that you receive from Keira Metz once you finish An invitation from Keira Metz quest. This quest has been described on the page about side quests, Fyke Isle, one of the regions in Velen.

Place the lamp in the active equipment slot, then pick it from the quick use menu and use it as if you were using torch or crossbow. You must do it near the body of the girl. You will hear a conversation between two warriors. Hide the lamp and use witcher senses again. You will notice some footprints at the sand next to the body. Follow them. 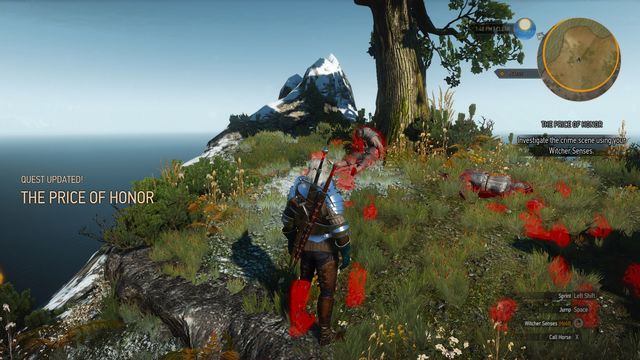 Examine warrior's bodies and take a key and a note from one of them.

Go on until you reach a large tree. There you will find two warriors that have performed suicide already. Examine their bodies and take a key and a note from one of them. Now go back to Harviken village and tell your quest giver about what you have learned. 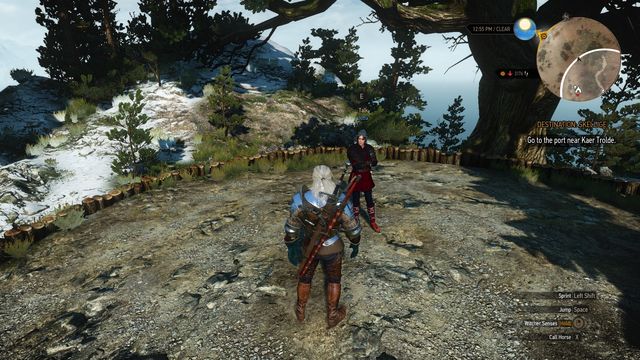 You will find Jutta in the center of the arena at mountain's top.

Reach the mountain's top in the center of Faroe island (M19,3). Talk with Jutta there. It is said that she is a great warrior, but she won't want to fight you. First you will have to prove your worth. You can do it by completing one of two quest. Which one you receive is completely random.

Defeat Gundar in Harviken village. Go to the settlement and talk with the islander that organizes the battles. Gundar will be on the 19th experience level. He shouldn't be hard to beat, but remember about one thing - you can't leave the arena. Because of that, you should avoid using rolling dodges, only block attacks and slightly jump away from the enemy. Once you're done, go back to Jutta and tell her about winning.

Option B - acquire the sword

Jutta will tell you to find a sword that cannot be jagged. It's the very treasure you look for during the Hidden in the depths (M19,2) quest. A thorough walkthrough can be found in the chapter about treasure hunts on Faroe island. You don't need to repair the sword before you give it back to Jutta.

Once you finish one of two tasks, you will be able to face her. She has 20th experience level and shouldn't be more challenging than Gudnar whom you defeated previously. Once you win the duel, during the conversation, you can accept invitation from Jutta. She will tell you to go to her house in Harviken after the sunset. If you refuse, the quest will end in failure.

Go to the village and wait until it gets dark. Now enter Jutta's house. During the conversation you can make Geralt sleep with Jutta. After a short cutscene the quest will end.

The potential romance with Jutta is described in more detail on the Other love scenes page from the Romance and Love Scenes chapter of our game guide.

To start this quest, you must walk to the western gate in Tottheim (M19,4). One of the guards will mistake you with a Nilfgaardian whom he was supposed to meet. He will tell you to follow him to his boss. 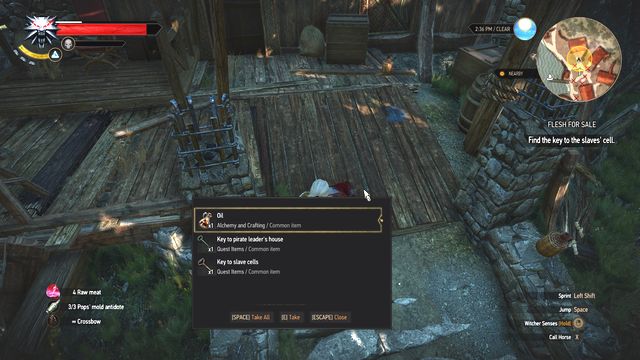 Take the keys from the body of pirates' leader. It will open his quarter and slaves' cage.

You can keep refusing to follow the talker. A battle will start after few times. You will have to defeat around 15 pirates at level 11-12. Once you're done, your next task will be finding two keys - to the leader's house and to slaves' cages. You will find them at the body of the leader of pirates. Search both bodies and you will surely find them. Now go to the building in the middle of the village. Open the door with the key you found and search the room. You will find many different containers with valuable items.

Now you must free the slaves. Walk to the cage and open it. You will receive a diagram and runestone as a reward. 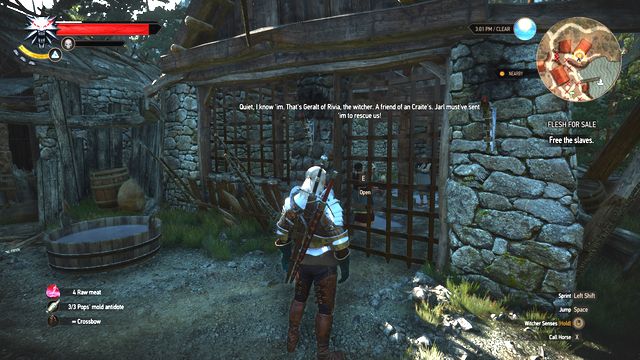 Open the cage with the key you received.

Agree to follow the pirate to his leader. During the conversation, keep agreeing that you're from Nilfgaard. At one point you will have to pay for the "merchandise". You can give them 500 crowns or use level 3 Delusion skill. You will receive a key from the leader of pirates which will open the cage with the slaves. Now leave the village. Once you're away from the camp, a conversation will start during which witcher will free the slaves. You will receive a diagram and a runestone as a reward.