This page of the guide to The Witcher 3: Wild Hunt includes a walkthrough of the main quest On Thin Ice. The following walkthrough explains, among others, how to defeat two powerful bosses - Caranthir and Eredin (the final boss), and how to complete the mountain crossing with Yennefer. 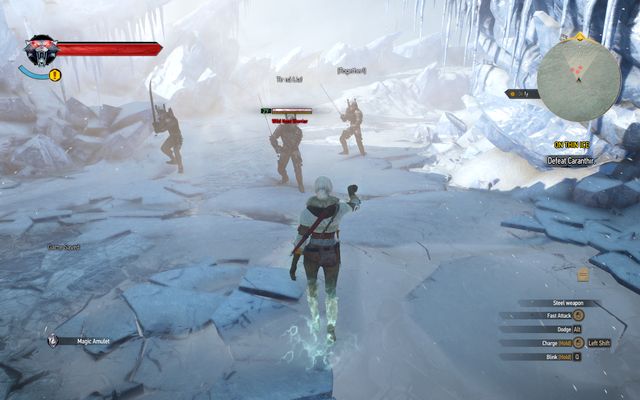 Get through the hounds and warriors of the Hunt

During the conversation you play as Geralt. When Avallac'h asks if you're ready, it is best if you refuse and actually make sure that you placed the oil on the sword, you have the potions and equipment you might need and if your equipment isn't damaged (reduced weapon damage if their broken). However, during the first phase you play as Cirilla. 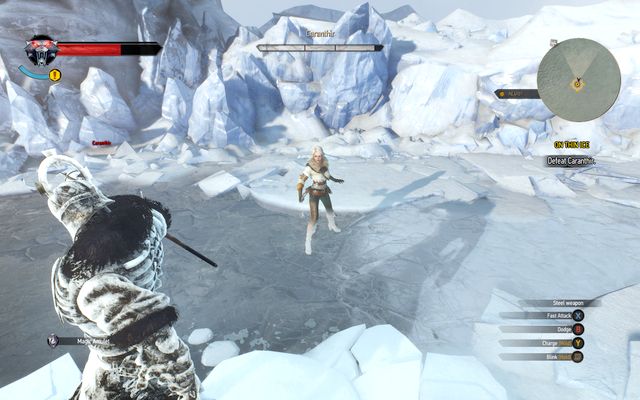 Caranthir - he fights seriously only with Ciri, with Geralt he doesn't use melee combat

Filled with power she will cut through enemies with a single hit while being almost immortal, so simply make a way to the main enemy, Caranthir. You must get 1/3 of his health in a traditional combat, your health won't regenerate. 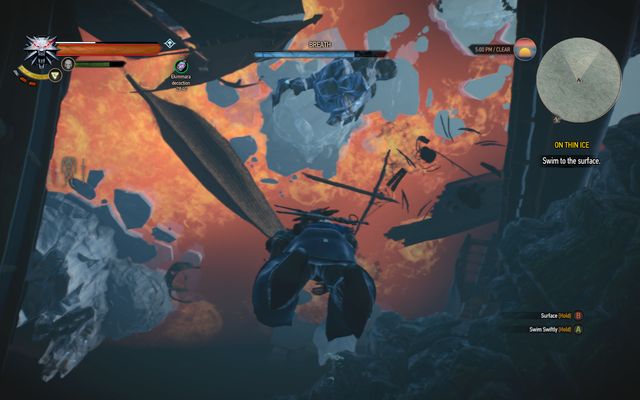 Swim out at any place as quickly as possible

Once enemy has only 2/3 of his health, Geralt enters the battle. With a good strategy the duel is surprisingly easy. Caranthir is using three techniques:

You can protect yourself from two first techniques simply by jumping away (short dodges might not work) or by hiding behind elementals.

Killing the elementals won't give you any profits, new ones will appear anyway as long as there is less than three of them. The main opponent doesn't use melee attacks - once you get close to him, you should attack him with strong hits - approximately every two hits he will teleport away. Quickly run towards him to deal him more hits, they can also cancel the preparation of his attack. Help yourself with Quen sign during the battle. After the combat you will fall to the water - quickly swim to the surface.

Important: you will have less potions/bombs after the battle - while on the way to your next opponent, before you raise your sword, try to use meditation. Of course, Geralt won't go to sleep, but he might create the same effect. 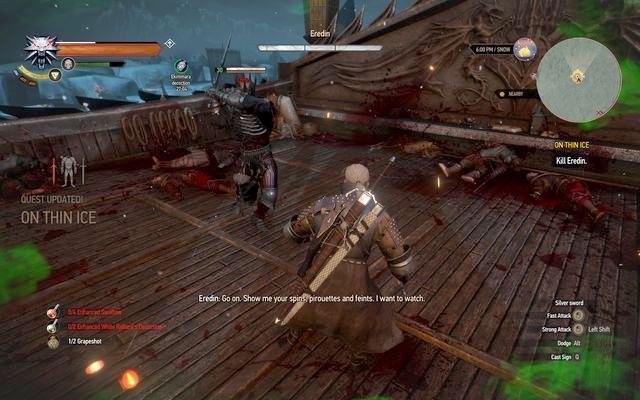 Eredin - remember to repair your weapon before the fight

After the battle, get through the fighting groups, you don't need to participate. All you need to do is run straight to the target - onto the enemy ship. There you will have to fight Eredin, first on the ship, where after taking around 10% of health you will both be moved by a portal to a larger territory.

If you don't do well in battle, you can use the following tactic: use Quen sign as often as possible. Learn to notice when enemy is teleporting and to which side you should jump - you want to get behind him or position yourself on his side. Quickly attack him with strong hits - even if you haven't developed them, they will deal large damage.

When enemy will use his ice techniques, you can either run towards him if you're not too far away or throw a bomb at him - no matter which, although the more damage it deals, the better. The battle will be long, you should use some boosters, like Thunderbolt potion, to defeat the enemy faster. You can also use Igni, but not in the rapid fire mode, and Aard/Axii to temporary stun the enemy and be able to deal a clean hit or two. 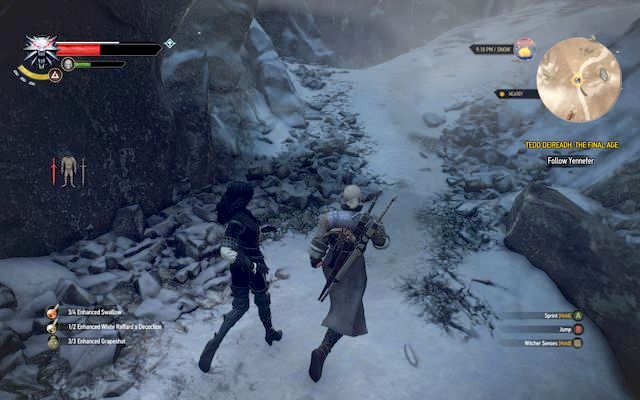 After winning the duel with Eredin, a separate small quest will start. You must follow Yennefer among the fire rain and monsters appearing from the portals. After a while you will catch a horse - with its help you will get close to the tower. A blizzard is there - Yen will create a barrier in which you will be safe. Few hounds will appear from the portals on the road, they are your last opponents. Enter the tower and watch the almost last cutscene.