This page of The Witcher 3 Wild Hunt guide contains a walkthrough of the Battle Preparations main quest. It consists of several smaller quests - The Sun Stone , Child of the Elder Blood and Fringilla Vigo . They have all been described in the following sections of the walkthrough.

Preparations for the battle - general assumptions

This quest, similarly to the previous Final Preparations, consists of few subquests (smaller quests) that must be completed in order to proceed. You will receive them automatically once you enter the ship and swim to Skellige with your crew.

There are three subquests: Sunstone, Child of the Elder Blood and Veni Vidi Vigo. Their walkthrough descriptions can be found in the next subsections of this page.

Once you complete those quests, go back to Avallac'h on the ship and talk to him. You will move to the Undvik island. 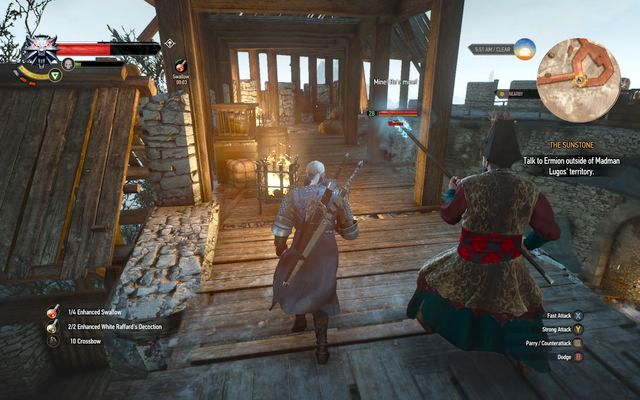 Together with Mousesack, fight yourself an escape road

Go talk to Crach in order to learn where you can find Mousesack. He is at Lugos, in the southern stronghold Kaer Muire. Before you go there, prepare for a battle with jarl's guards. Defeat the enemies with the help of the druid and then escape with him from the village. He will give you information about from whom you can learn about the cave with the stone you seek. You have two options: talk with bard Eyvind or with Matthias. 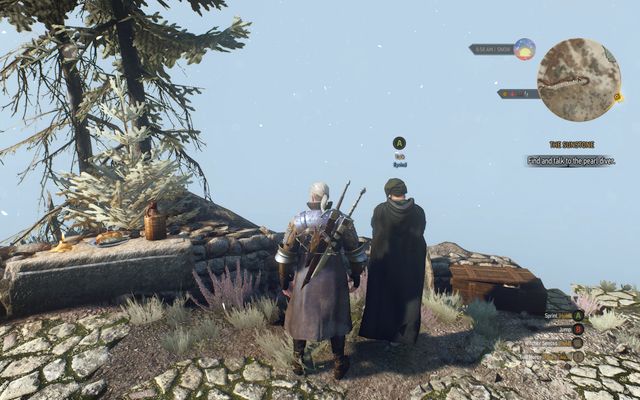 The bard that can be found on the rock in Ajnborn will tell you where to find a cave only if during the conversation you won't tell him when you see a whale and then that you want to write a book about this place. If you answer other way, you will have to meet with pearl divers anyway. 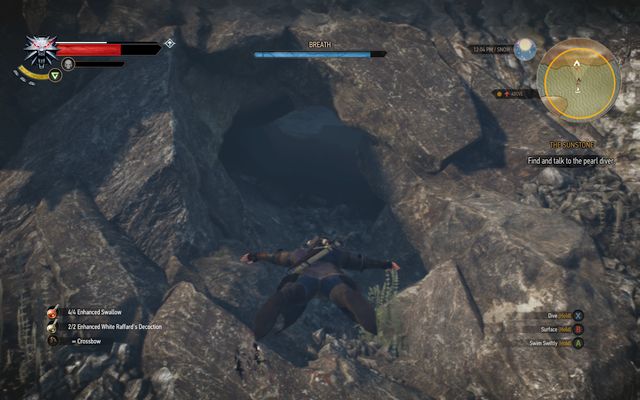 Entrance to the cave in which the divers are sitting

Second option is worse in that you will first have to dive and reach the underground cave in which you will find the divers. They will tell you the same thing that bard would, but after the conversation drowners will additionally attack you. 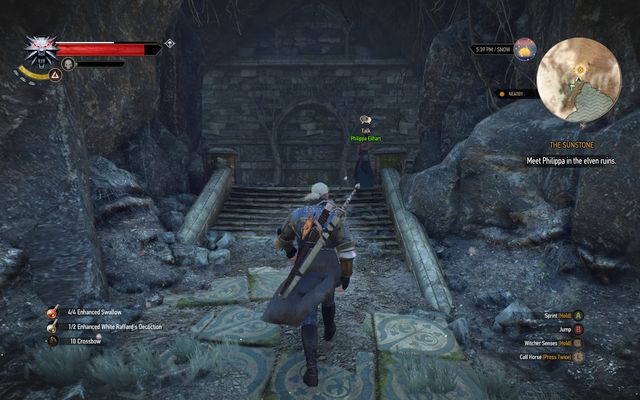 Meet with Philippa at the entrance to elven ruins

No matter which option you choose, go back to Yennefer. Continue the quest after the short talk or first focus on the new one called Child of the Elder blood. Then, go to the marked point from the northern side (from the sea). There you will see an entrance to the elven ruins. Philippa will be waiting for you there. 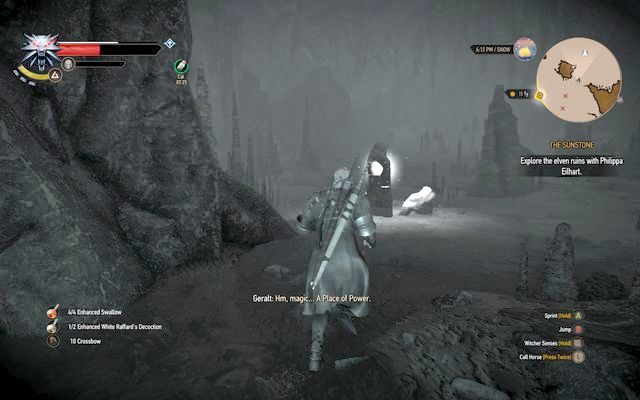 The Place of Power in the underground ruins

Follow her to the cave. You will face many monsters here, their levels will vary from 27 to 31. Drowners and a siren will get in your way; after killing all the opponents you can use the Place of Power (Igni sign). 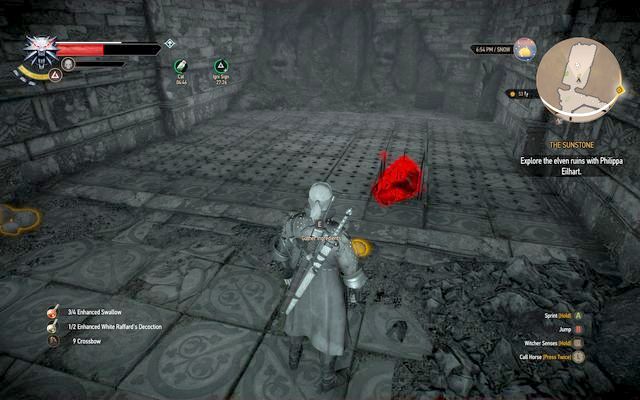 Once the sorceress repairs the broken stairs, she will turn right. You can go left and take the hidden treasure, but you will have to watch out for a spike trap. You will have to use witcher senses to see where the spikes are located. The key can be found at the body on the spikes, on the other side you will find a lever that deactivates the trap. 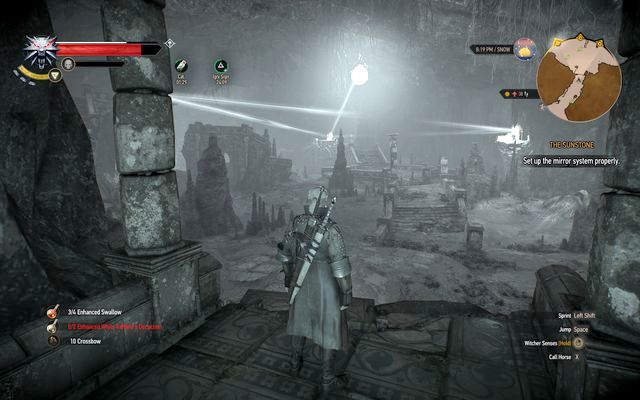 The mirrors - move each by using the lever single time

Keep following Philippa and face a golem. In next room you will see mirrors - you must move each of them by using the levers connected to them. Each mirror is guarded by the wraiths. Once you take care of three objects, go to Philippa and take the rock. The quest ends at this point - Philippa departs and you must leave the cave.

Child of the Elder Blood 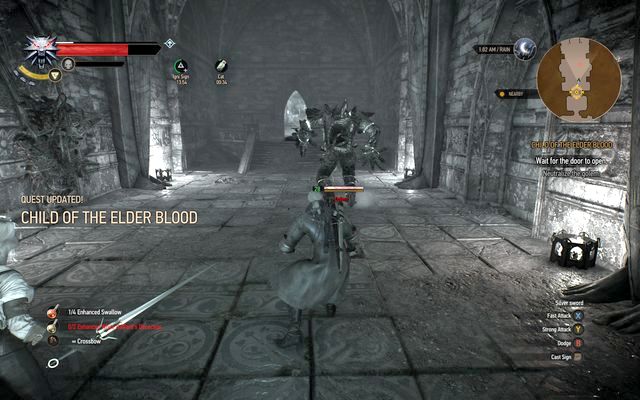 The golem that guards the entrance to the laboratory

You'll get this quest once you get to Yen after completing part of the Sunstone subquest. Go to the island to the West where you will find Avallac'h laboratory. While Yennefer will be opening the entrance, you and Ciri must defeat a golem (level 28). Then the path will be clear - you will have to examine the laboratory. 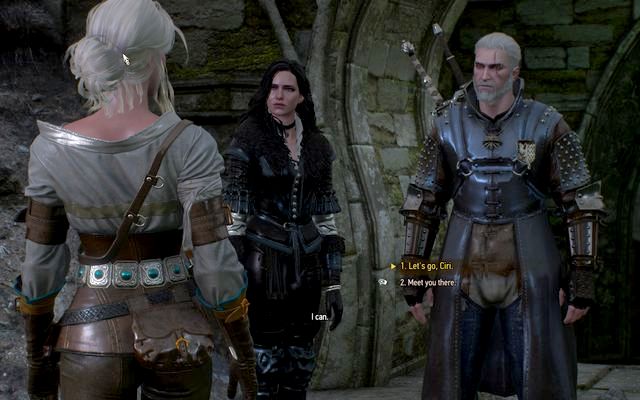 Decide whether you will go with the girl to Skjall's grave

You won't find anything interesting, after a moment Yen will call you. Once the conversation ends, walk to the lower level. After another talk, go to the door on the other end of the room. After the cutscene Geralt will have to decide what to tell Ciri: should she calm down or wreak her anger. Second option is considered as positive.

Leave the laboratory. Now Ciri will ask you whether you will go with her to visit the grave of her dead friend. Agreement is considered as positive, refusal as negative. Visiting the grave is written in the journal as Skjjal's Grave quest. The journey to the grave itself is just a cutscene after which you will return to the port. 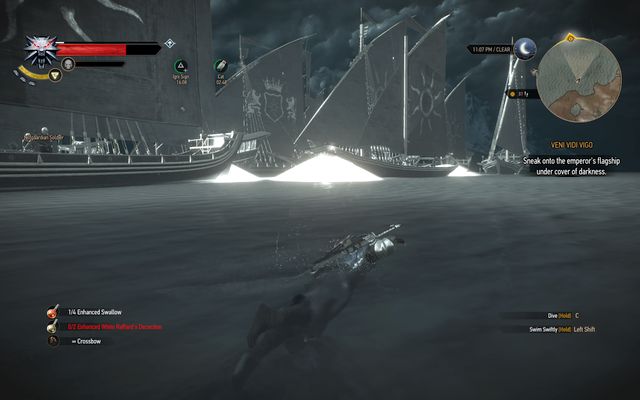 The second task you receive at the beginning is reaching Emhyr's ship. Do it during the cover of the night and avoid the light near the ships - if you are detected, soldiers will shoot at you with crossbows. Swim to the emperor's ship between other ones, it will be done easiest by diving. You will reach the deck by interacting with the anchor at the stern, from the north side.

After a short conversation with the ruler you and Fringilla will return to Kaer Trolde and the quest will end.