This page of the guide to The Witcher 3: Wild Hunt has a walkthrough of the main quest Final Preparations. This is part of the epilogue and we have detailed all the small tasks related to the preparations for the final battle with the Wild Hunt.

Note - The activities described below will have an impact on the ending of the main storyline. It is worth watching out in all those places where there is an important choice.

Conversations with Yennefer and Triss and an important choice about Ciri

Important - This quest has some impact on the ending of the game.

After the battles at the Bald Mountain, you will find yourself in Rosemary and Thyme. After a short conversation with Dandelion, go speak with the girls (Yennefer and Triss) and then with Avallac'h. Speaking to Triss will activate the Blindingly Obvious quest, with Avallac'h - Through Time and Space quest, with Yennefer - The Great Escape quest. Once you complete the subquests, go back to the inn.

Then you must decide whether Ciri should go meet with the sorceress alone or should you join her - it will impact the ending related to Ciri's fate. For more information on the available variants, see the separate Endings chapter in our walkthrough. 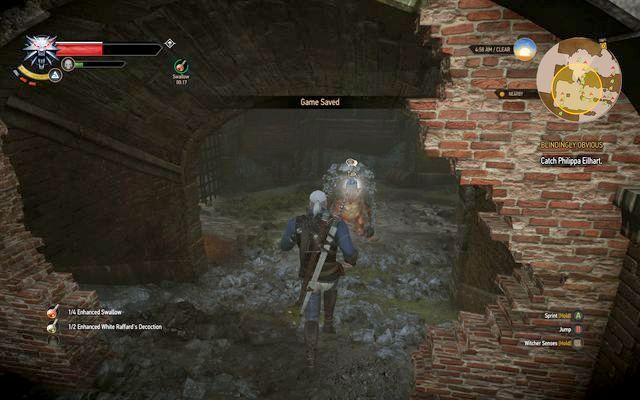 Go with Triss to the fountain near Passiflora. From there, you will both go to Dijkstra's baths. Philippa casted a spell on everyone you meet on the way, so first you will have to face bath's guards, then Bart the troll. However, you can avoid the battle by saying that you intend to help the sorceress. It's not over yet - Philippa will summon a Fire Elemental. To defeat him, you must attack him with quick sequences of attacks. As long as you're near it, you receive fire damage. 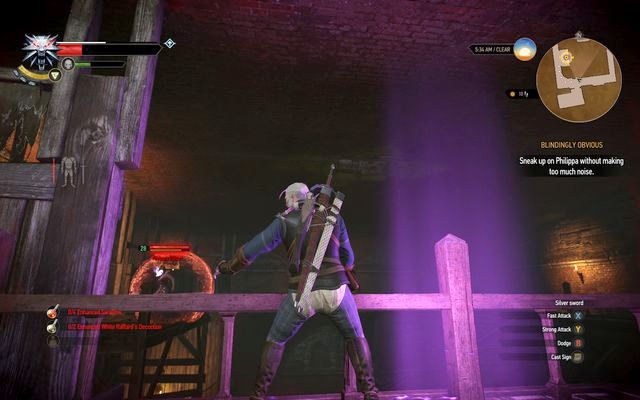 Catch Philippa by walking to her

Once you take care of the elemental, go to the stairs. Sorceress' magic works from there, so you must walk to her as quickly as possible (hiding behind objects won't help). A cutscene will play and you will return to the baths. If you want to solve the matter quickly, scare Dijkstra and then, by picking the proper dialogue line, beat him up. However, if you solve it peacefully, you can inform the spy about Ciri, thus unlocking the Reason of State quest. The quest is related to the ending in which Ciri becomes the empress. 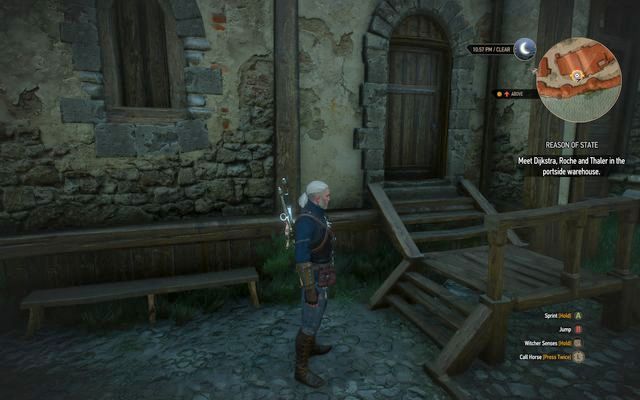 Entrance to the conspirator's warehouse

Once you finish the Blindingly Obvious quest, you can go to the port district to meet with Dijkstra and Roche and help them assassinate the king. Once you leave the building (through any exit), you will meet Philippa. She will give you a ring, the evidence for Radowid. 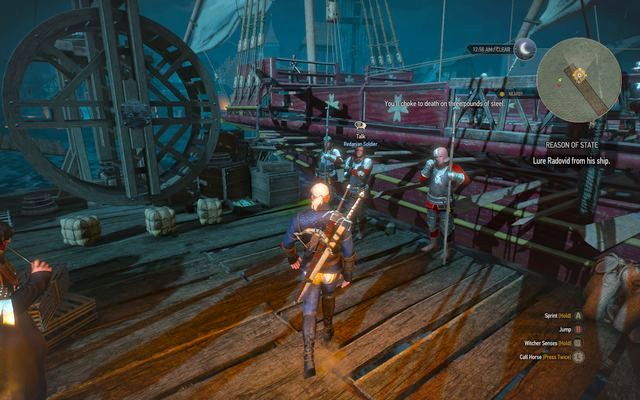 Talk with the guard to get on the ship

Go to the port, to the king's ship. Talk with the guard in front of the ship. Once you finish, use the oil on the steel sword, the battle is near. After the cutscene, you will face guards (levels 27-30). First, accompanied by Roche, defeat the first group, then try to get through to the end of the road - you don't need to kill all opponents, only the ones at the end. You will fight on a small territory, so use bombs and signs that have area of effect (Yrden, Aard, igni). You don't need to attack the guards with shields that are standing at the barricade - killing them is not necessary. 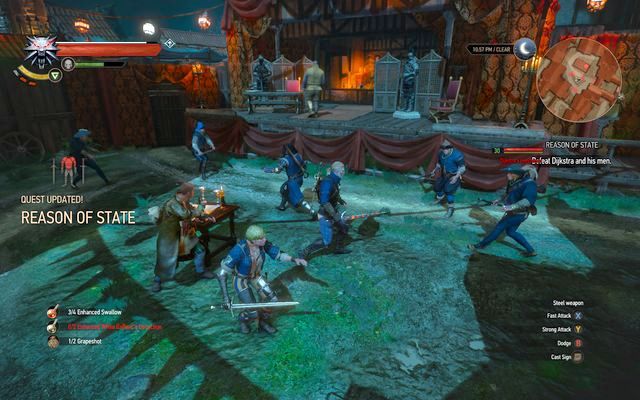 Fight against Dijkstra or let him rule

It's not over yet. Now you must make one of the most important decisions. Fight alongside Roche against Dijkstra, then Nilfgaard will start ruling. If you say that "it's not your worry" and walk away, then Dijkstra will kill Roche and Ves and will rule the North.

Through Time and Space 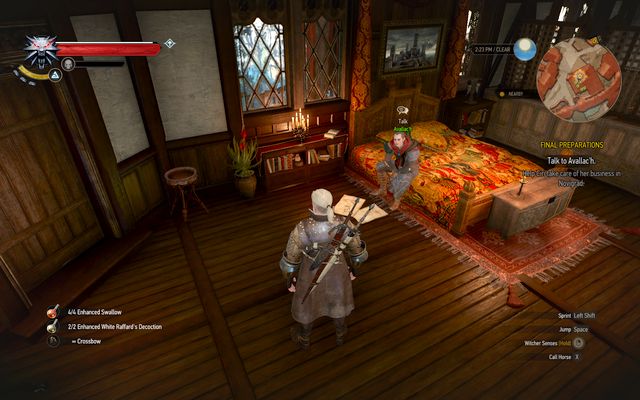 Talk to Avallac'h who is sitting in the room on the highest floor of Rosemary and Thyme. You will go with him to the portal that will transport you to the other world. Follow the elf to the place where a portal is supposed to appear. Crabs of unknown species will attack you - fight them until the portal opens, then quickly run through it. 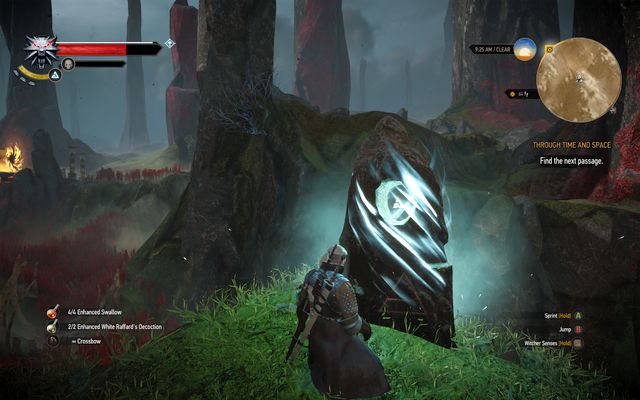 The Place of Power in second realm

You will land in another world, full of poisonous gases created by plants. Go to the portal - you will find a Place of Power (Aard sign) on the way. You must jump down at the end of the rocky path - despite appearances, the gases aren't intense and you will easily reach the portal. However, prepare yourself, as you will be teleported underwater and will have to quickly swim to another teleport ahead. 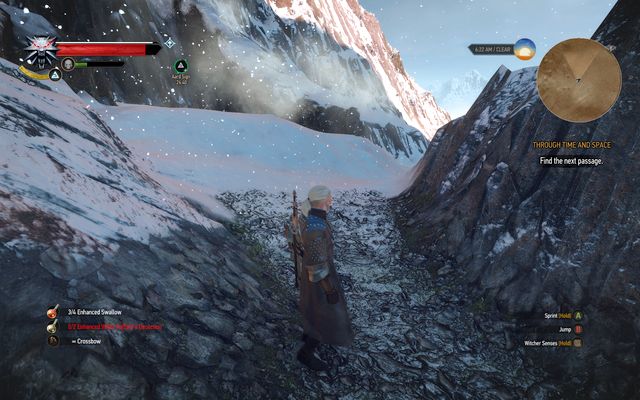 In the last realm, you must reach a lighthouse on the other side of the village. The blizzard will slowly take your health away. Reach the city as quickly as possible - you will be resistant to the cold when walking among the buildings. Additionally, you will find food in chests and packages that will regenerate your health level. 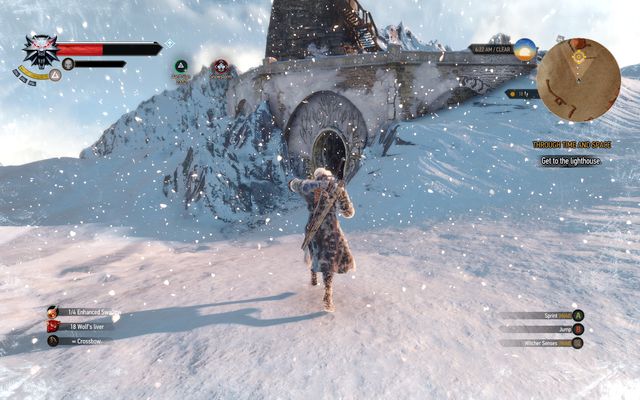 Walk through the entrance under the lighthouse, from the city's side

You will probably face some Wild Hunt hounds (level 27) on the way. Once you reach the lighthouse, walk under it. There you will meet Avallac'h and together you will escape from that place. After some cutscenes the quest will end. 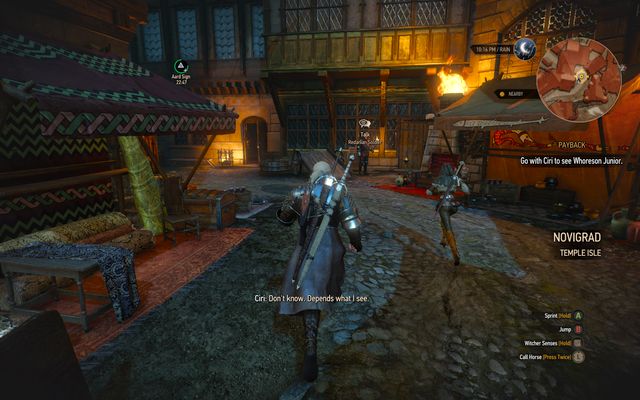 Go with Ciri to three places

Another quest that is a part of the preparations. It will start automatically after finishing the Through Time and Space quest or any time you want, triggered by simply talking to Ciri. In this quest you visit three places: 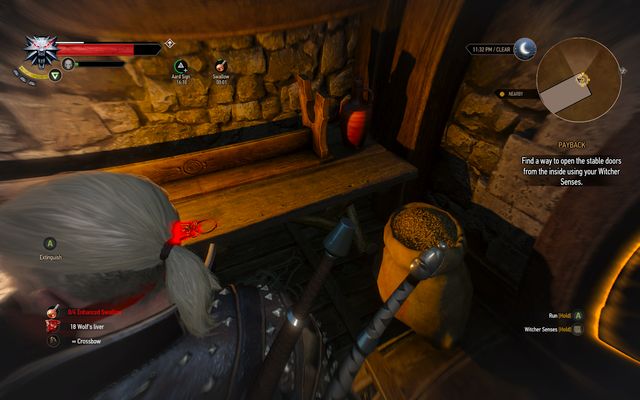 The key is lying near the door

Only the circus folk require some attention. You can participate in a race once you receive the proposition (no profits) and you will have to help in stealing some horses. To do it, climb on the roof and enter the stables through the window. Walk down the ladder quietly to avoid disturbing the horses and waking up the guard - otherwise you will have to beat him up in a fist fight. Take the key lying on the table near the door and open it. If you made some noise, you will have to calm the horses with Axii sign. After the cutscene, the quest will end. 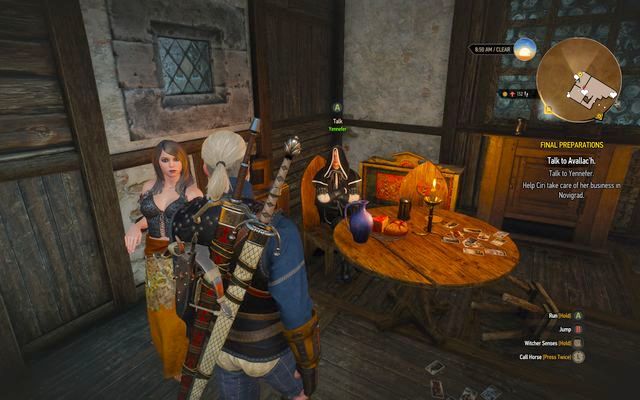 Yennefer in the brothel

Meet with Yennefer in Catherine Bootlegger. After a moment, a chase after a man will start. Follow him up the ladder where together with Yen you will stop and interrogate him. Now you can optionally go talk with Zoltan about the help, but he will refuse. 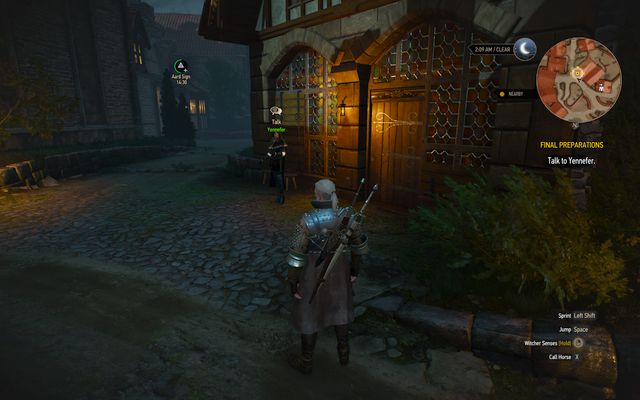 Meet with Yen at the Oxenfurt bridge

Reach Oxenfurt and meet with the sorceress again. You will go together to the well. Jump in and swim to the marker. You will face drowners and a grave hag (level 26) underground. 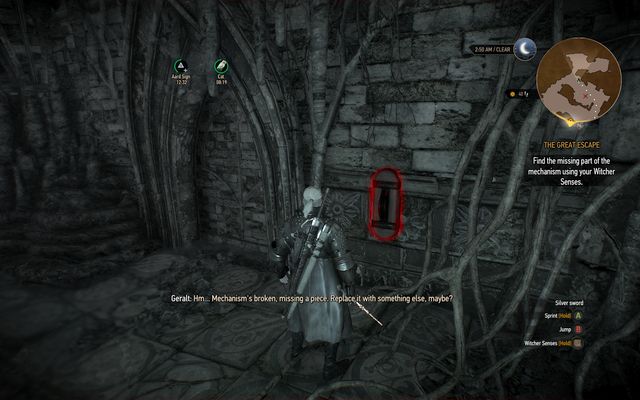 The switch in the underground

Once you will walk towards the lever, you will notice it is broken. Turn around and swim through the flooded corridor and behind the portal you will find a switch. After installing it and opening the door, destroy the brick wall with Aard and go up the sewers. 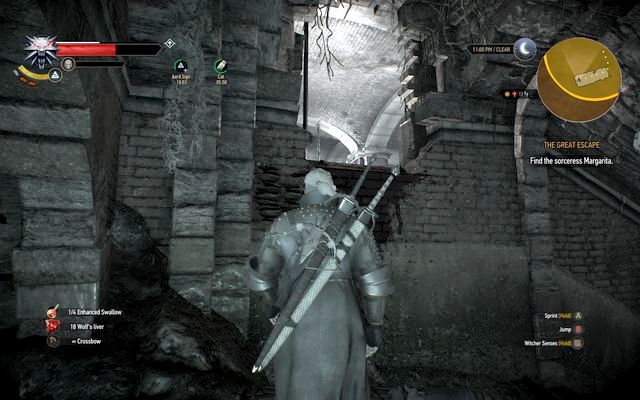 At this point the previously mentioned jumping bug might occur - sometimes Geralt refuses to simply climb up. There are two Witch hunters in the room. On the table you will find a key. Leave the room and go up where you will have to defeat three more guards. During the conversation the sorceress will tell you that the warden has keys to the prison. 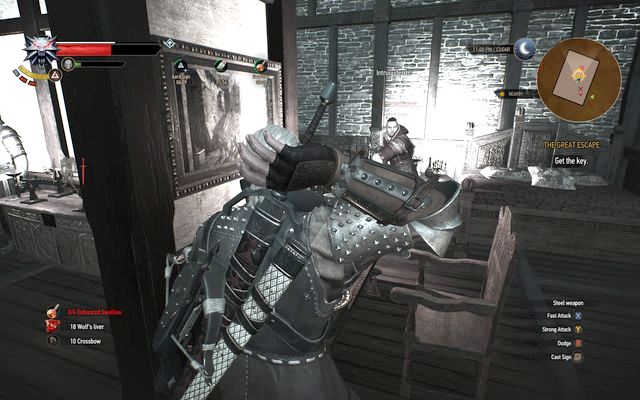 The warden - the room is very small, which makes the combat harder

Walk outside the prison, beat the redanian soldiers and go upstairs. After killing the warden, who is slightly more resistant than the rest of the soldiers, you will find a key next to him and some Gwent cards: Johan Natalis, Fringilla Vigo and Isengrim Faoiltiarna. Once you free Margarita, escape the prison through the walls, by using the hole that leads out of the prison.