On this page of the guide to The Witcher 3 Wild Hunt, we have included a walkthrough of the main quest - The Battle of Kaer Morhen. The following walkthrough explains, among others what is the importance of the Kaer Morhen council, how to prepare for battle, how to close portals and how to behave when playing as Ciri.

Meeting at Kaer Morhen and preparing for battle

Once all planned companions are recruited, go back to Kaer Morhen. You can talk to the new temporary residents of the fortress. Keira Metz and Zoltan will be the most important of them - you can trade with the sorceress and the dwarf can make items for you. It's the last chance to use their services before entering the castle. 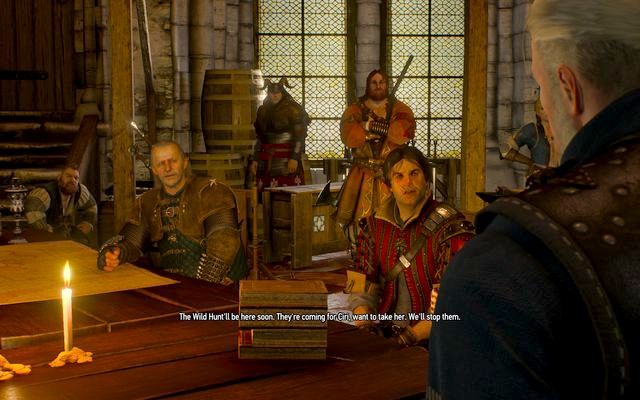 Go to the council. First dialogue options won't matter, only the laboratory and workshop issues will. You can make Vesemir finish preparations of potions - you will receive Superior Swallow and, if you completed the Novigrad side quest Following the Tread quest, Enhanced White Raffard's Decoction. Otherwise, you will get Thunderbolt. However, if it will be Eskel that will use the laboratory, he will prepare some additional witcher traps that will reduce the number of enemies.

Second matter - the workshop - will allow you to dig out the rubble and obtain a great silver sword. You can also repair the hole in the wall, it will greatly reduce enemy's numbers. After all is set, you have one last chance to change your choices. Before you leave the castle, place oils on your sword and prepare potions, use grindstone and armorer's table, don't forget to repair your weapons with repair kits. Once you leave the castle doors, you will immediately start the battle and won't be able to use any boosts applied before combat. 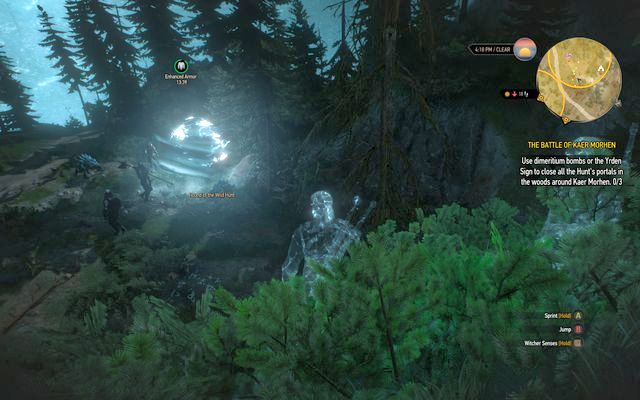 Close three portals in the forest, after that the invisibility will stop working

In the first phase you and Lambert will have to close three portals. Each of them is guarded by Wild Hunt warriors and hounds (they can spot you despite the invisibility). Enemy's levels are around 22-24.

Portals can be closed with the dimeritium bombs (hold the throw button in order to aim) or with Yrden sign. Each warrior has a Tir Na Lia potion which can be used like a healing potion. 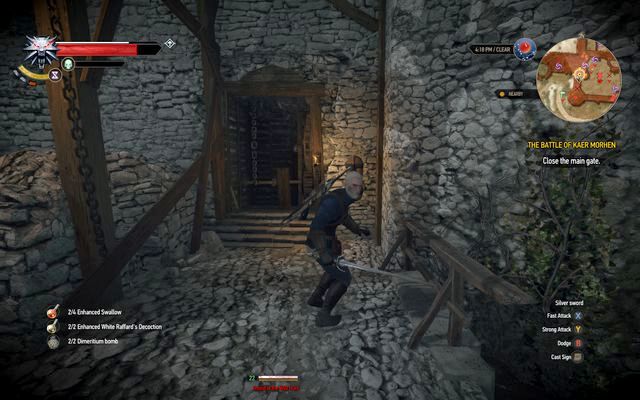 Switch to the main gate

Once you close three portals, you will switch to Ciri. Run through the wall to Triss and eliminate all enemies at the tower. Ciri's regeneration ability is working, you will also receive an additional skill and a stone that summons fire balls to the place where you stand (effective only against group of enemies).

Then, again as Geralt, eliminate few enemies at the courtyard, jump on the wall and run to the wall where you will find a switch that closes the main gate. Now Lambert who is fighting below will need your help. You can place Yrden near him, it will decrease the amount of damage he receives. Walk behind the gate after the battle. 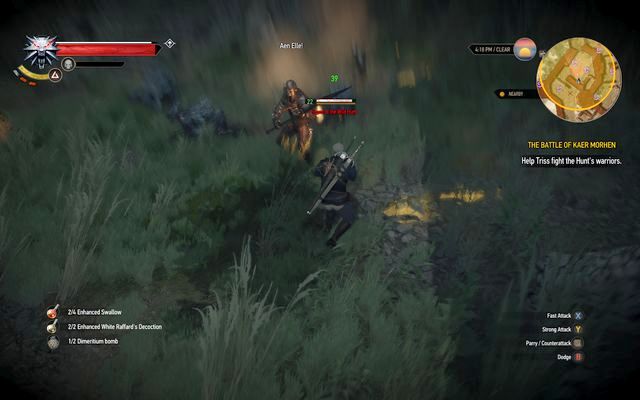 Defeat the remaining enemies at the courtyard

Once you're behind the gate, first finish enemies at the marked territories. Be careful when using bombs and Igni - the barrels prepared by Zoltan are located in many places, you can hurt yourself with the explosion. 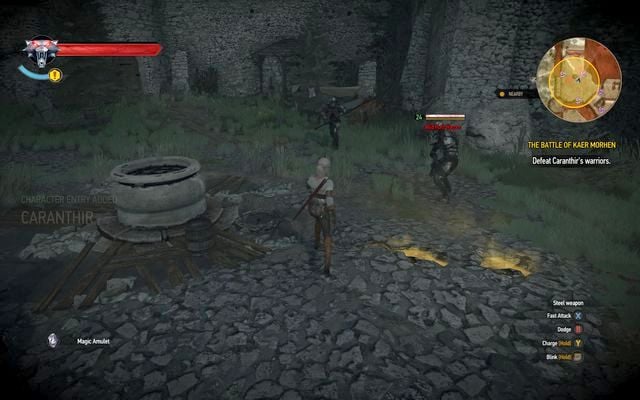 Help Eskel get rid of the invaders

Next phase is a battle as Ciri at Eskel's side. The stone that summons fireballs will be very useful. If you are hurt, move away from the battlefield for a moment until Ciri regenerates - your companion is immortal. After the battle you must use the windlass. 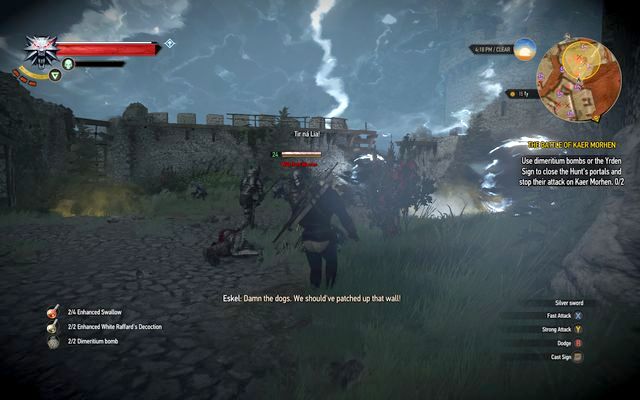 Close four portals while at first ignoring the enemies

After the cutscene you must close four portals as Geralt, two on each side. You don't need to focus on fighting, only on completing the mission objectives as quickly as possible. Once you're finished, a cutscene will play. After that, the quest will end and another another main quest will start: Blood on the Battlefield.