On this page of The Witcher 3: Wild Hunt game guide we have included the walkthrough of the Ugly Baby main quest. This walkthrough explains, among other things, when we can return to Kaer Morhen, how to defeat the trolls and reach the altar, and how to lure the Forktail.

Make sure that you're ready for the journey before taking Uma from Crow's Perch (details in the next section). Check the "Complementing the crew in Kaer Morhen" chapter, because after reaching the stronghold, you will be able to leave it only during the team collecting. At that point you won't be able to recruit any new members.

Missing the step involving recruiting one of the allies does not mean you'll fail the campaign, however, you won't unlock one of the achievements in the game. 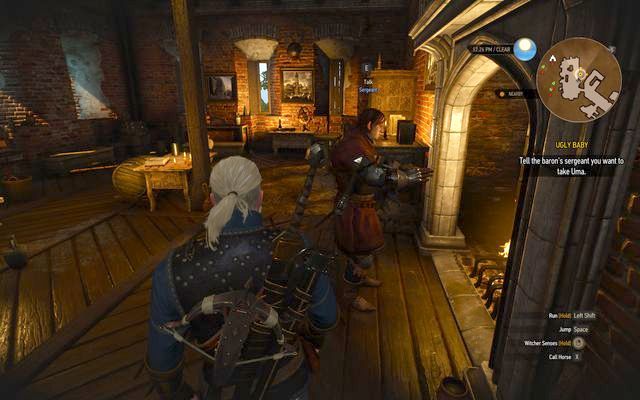 Meet with the current ruler of Velen

After completing the main quests in Velen, Novigrad and Skellige, you will be ordered to take a creature called Uma from the Crow's Perch.

Depending on whether you have fully completed the Family Matters quest by finding Baron's Wife (Ladies of the Wood) in Velen, in the perch you will be talking to the Baron or the Sergeant who takes his place. Except for that slight difference, the quest will be the same in both cases. Talk with the stable boy after you receive permit to take Uma. 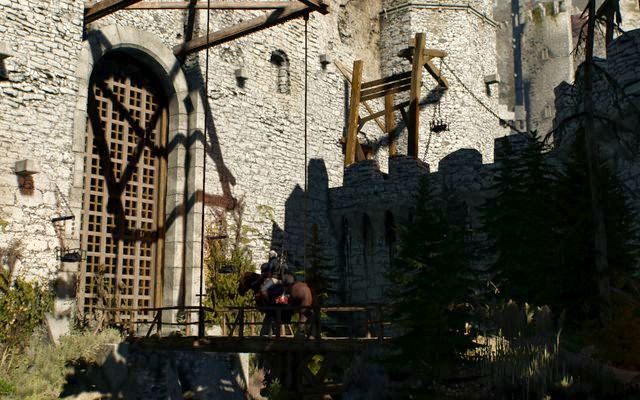 The gate to Kaer Morhen

While on the road, a cutscene will start during which you will be taken to Vizima to meet with emperor Emhyr. The dialogue options won't matter, after a moment the journey will resume and you will regain control of the character once he reaches Kaer Morhen. Vesemir will welcome you and inform you about new quests:

The new minor quests are described below. You can complete them in any order you want; however, the one as on the list above is recommended. Only after you finish all three quests will you be able to remove Uma's curse. 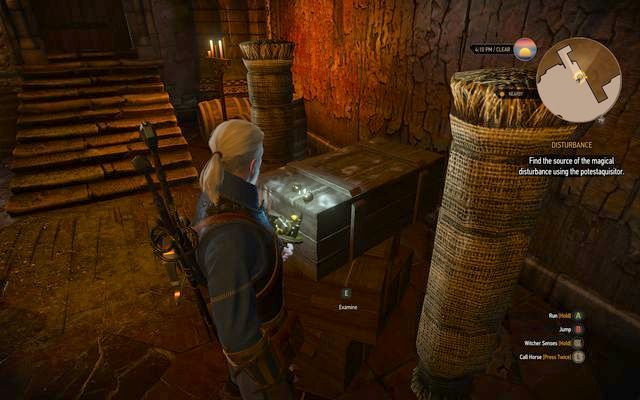 Weird chests that cause disturbance

First subquest. Go to the first floor to see Yennefer. She will give you a special device that makes a sound when you activate it during your search for the source of disturbance.

Go to the ground floor, near the entrance door. On their left side you will find the source of the disturbance - chests covered with white powder. After examining them, go back to the sorceress. Watch the cutscene and this phase will end. 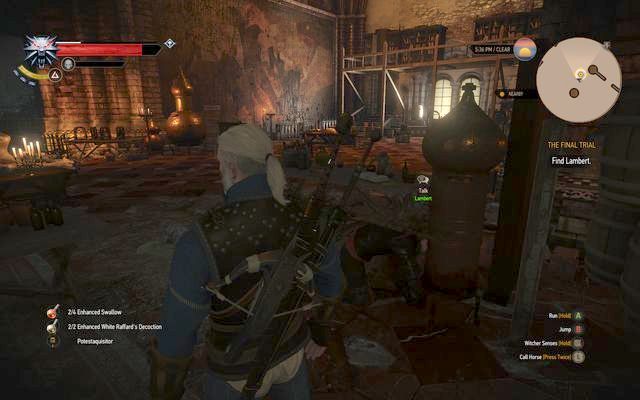 Next subquest will be completed together with Lambert. Follow him, you will face some harpies (level 19) on your way. You will reach a fisherman's hut where you should find a boat - go look for it West from the building. You will have to deal with some drowners (level 17-18) and, after defeating them, with a water hag (level 20). Walk into the boat with your colleague. 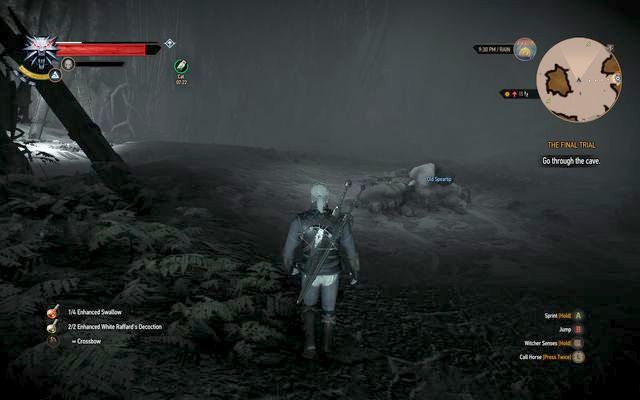 A cyclops in the cave - you can bypass it

You will reach the other side of the lake, where you will hear a child's voice. It's a trap - if you follow it, three foglets will attack you. Because of that, it is better to ignore the call and go straight to the cave. There you will find a sleeping cyclops - you can bypass him or decide to fight him together with Lambert. 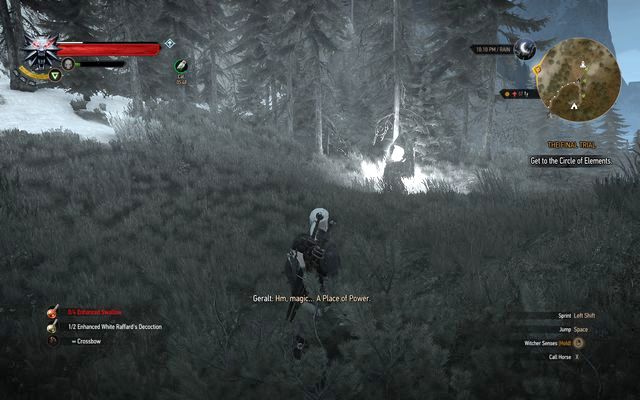 The Place of Power near the path up

After leaving the cave, use the Place of Power to gain a skill point. A bit further you will meet a group of trolls - watch out for rocks they throw and escape to the cave. You will find them on the other side of the cave as well - three of them. You can fight them immediately or negotiate to temporary give them the swords in exchange for free passage to the Circle. In both cases you will reach your destination... 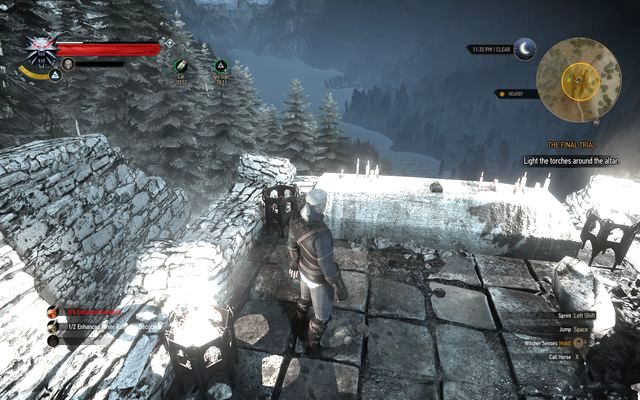 As Lambert suggests, place the phylactery at the altar and light four torches around it. Now kill some time waiting until it loads by talking with your companion. Once it is done, pick the artifact, optionally go back for your swords if you skipped the fight with the monsters, and you can go back to the hold.

To Bait a Forktail... 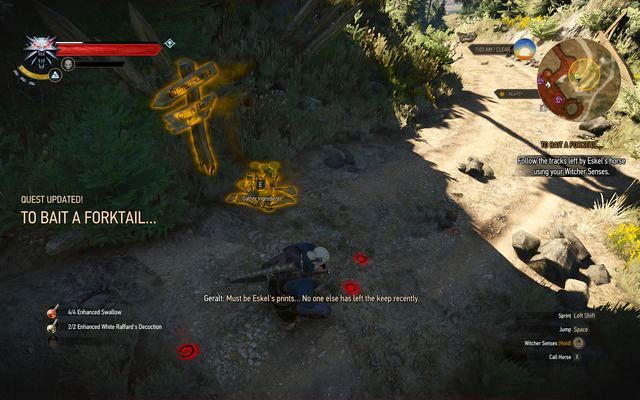 Eskel's prints on the other side of the bridge

Search for Eskel at the other side of the stronghold. You will find some prints, follow them. You will reach a camp set up by the other witcher. Inside you will find enhanced draconid oil and footprints, your new trail. 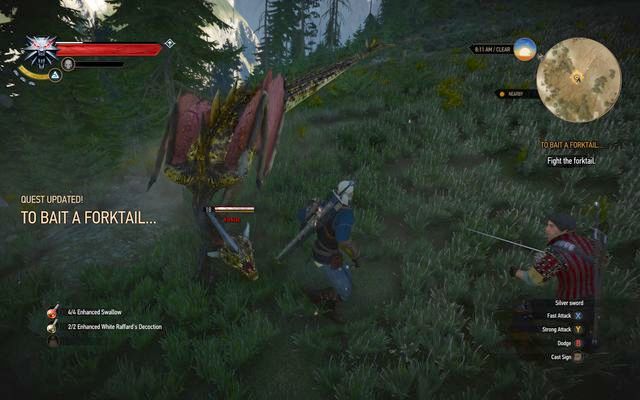 After a moment you will lose the trail. Examine the tree near the path and follow the smell up. After a moment, you will notice Eskel. Soon after that, a battle with the forktail (level 18) will start. Once you take half the hit points of the enemy, it will escape to its lair nearby. Follow the blood marks. The creature in the cave will have the same amount of health - it won't regenerate in the meantime. 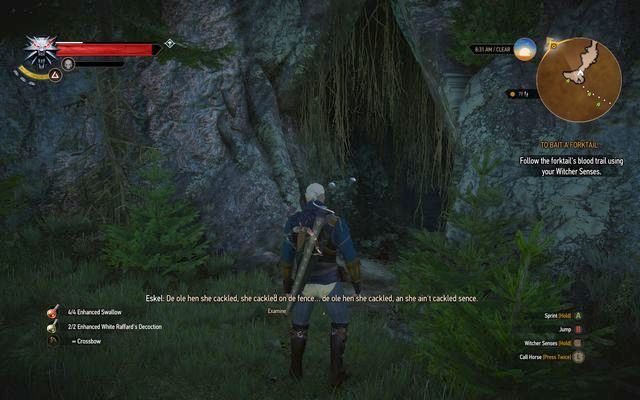 After killing the monster and obtaining the mixture, leave the cave. Eskel will ask if you want to race him - you won't lose anything in case of losing, winning will give you Hanged's Man Venom receipt and good shoes.