Points of interest on the map

Important NPC characters on the map

1 – Clan Tordarroh Forge
You visit the forge as a part of the "Master Armorers" side quest. You will find a destroyed building, as well as a small cave which is occupied by a hostile rock troll. The creature is guarding the smithing tools.

2 – Dorve ruins
The primary reason for visiting the ruins is to complete the "Lord of Undvik" quest. This quest will force you to defeat an ice giant.

3 – Cave complex
You will find a huge underground cave complex in this part of the map. Exploring the caves will help you to get to the forge (3), but that's not all they have to offer.

4 – Kaer Almhult
This is a small prison island and you'll find a destroyed fort here. A very large group of pirates inhabits this location (lvl 12). You can defeat them and you can also look around for a hidden treasure.

5 – Shipwreck
You can meet with Octo here (it's a part of the "Lord of Undvik" quest).

6 – Hidden treasure
Deal with the wraiths (lvl 16) and find a boat with a document. Reading this document will unlock the "Shortcut" treasure hunt quest.

7 – Hidden treasure
Find a shipwreck and inspect it in order to uncover a dead body. Examining this body will result in finding a document. Read it to unlock the "Precious Haul" treasure hunt quest.

8 – Hidden treasure
The only way to get to the treasure is to locate a passageway to the lower levels of the prison - it's in the north-western corner of the fort. Defeat new pirates and find a Key to prison in one of the cells. Use it to open all of the nearby cells.

On this page of The Witcher 3 Wild Hunt guide, you will find the map of Undvik island and several other neighboring maps from the Skellige archipelago. On the map of the world atlas we have marked important areas of Undvik, as well as all the signposts found in this part of the archipelago.

The map above shows Undvik island which is a part of the Skellige islands archipelago and few smaller isles surrounding it.

There are no human settlements on Undvik, you will only meet few friendly characters here (they are related to quests). Despite that, it is worth exploring the island - Geralt can kill some stronger monsters and find rare treasures (like witcher gear parts) here.

You will find a giant cave complex in this part of the island. Exploring them might help you reach the forge from point 1 which is related to the Master Armorers side quest (you can start is at Crow's Perch in Velen). The caves have their own treasures to find as well.

It's a small prison island on which a ruined fort can be found. A very large group of pirates (level 12) can be found here. Additionally, you can find a hidden treasure (point 8) here. 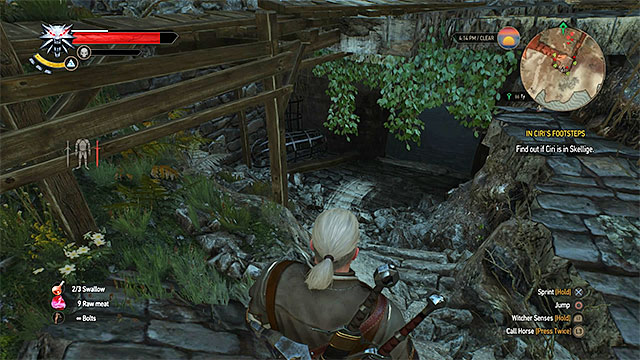 In order to reach the treasure you must find the entrance to the lower levels of the prison - it's in the northwestern corner of the fort and it has been shown on the picture above. Kill some more pirates below and find the key to prison in one of the available cells. Open the neighboring cells with it.

Some locations on Undvik island are related to quests that start in other corners of the game world. So don't worry if after finding a new place at first you won't find anything interesting there.

While traveling through Undvik island it is wise to save your game regularly. Many mountain paths are very narrow and you can fall if you walk off the track. The same goes for the caves in the southern part of the island. Additionally, in this part of the world we can meet challenging, high-level monsters.