This page of The Witcher 3 Wild Hunt guide contains a walkthrough of all side quests related to the Hindarsfjall island, Skellige. In the walkthrough, we explain how to unlock and win all the Skellige horse races, how to find the werewolf of Larvik village, what to do about Morkvarg, and how to get rid of the monsters in the cave next to Larvik.

You will learn about this quest from the notice board in Larvik village (M18,1). Go to Freya's Temple on the north-western part of the island to receive more information. Talk with one of the priestesses there - Josta. She will suggest you meet with Einar, the man that can tell you more about the monster. He can be found in the port near Larvik village. You will learn that Morkvarg is probably a werewolf.

Go to the residence near Freya's Temple. Walk to the main gate and watch a cutscene. You won't be able to get inside via the main entrance, you must look for another way in. Walk up the stairs, get to the residence's walls and go to its center. There you will find a small table and some tracks to be found with your witcher senses. Look for footprints and then follow them. You will face few wolves on level 14 on the way. You will reach a wall with a door. However, the door will be locked, so you must look for another entrance. 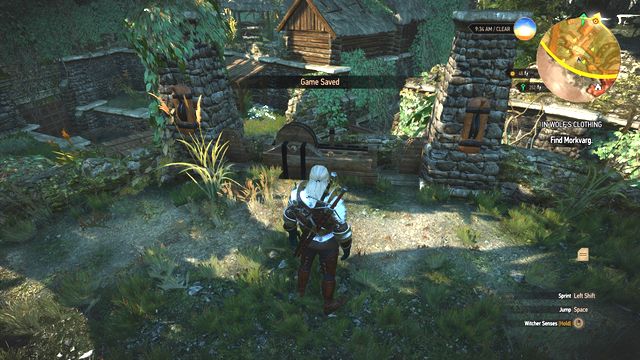 By using the mechanism you can open and close specific floodgates.

Now go to the back of the residence while going across the eastern wall. You will reach a small river behind which there will be many werewolf's marks. Use the ladder in the rock to get to the higher ground. Now you must use the mechanism to open the floodgates and unlock the passage. It works in a very simple manner: you pick the gate that you want to open/close with the right lever and with the left one you perform the action itself. The currently selected floodgate is represented by a stake. Open the middle passage and go to the center of the mansion. Now go to the small building with open doors. Examine all the tracks that you will find. Morkvarg will come to you while you're be busy doing it.

After the cutscene, the battle will start. It shouldn't be too hard as long as you have a character on at least medium level. After you defeat him, you have two options:

Option A - lift the spell off Morkvarg

After defeating the werewolf you can try to kill him. Sadly, it won't work and the enemy will only disappear. Now you must find him again. Go to the place with the switches, then further to the cave. Inside you will have to kill Morkvarg for the second time. Additionally, you will learn about a key to the building in the middle of the residence. 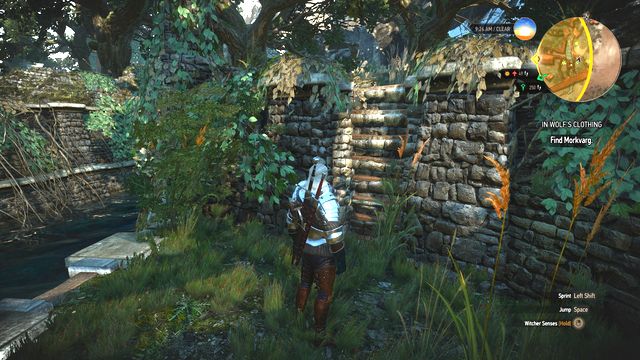 In some situations you will have to use the ladders in the rock.

Walk again to the mechanism. Open the right floodgate that leads to the cave. Swim there and dive. Search the room that you reached with the witcher senses. Take the key from the pile of bones. Now go to the main yard and enter the large building. Open the left door with the key and take Morkvarg's journal from the chest. Read it. 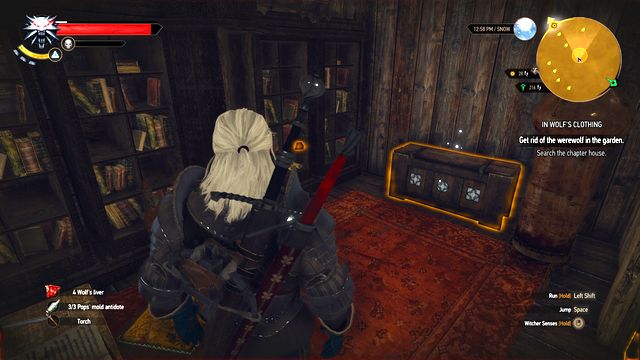 Take Morkvarg's journal from the chest.

Now you must go back to Einar who can be found in the port near the Larvik village. You will learn that he was part of Morkvarg's team and he is responsible for the curse. To undo it, take an amulet from him. You must touch the werewolf with it. During the conversation, you can also decide to fight Einar. In that case you will have to face him and his three men on level 14. Take the amulet from the body of the fallen enemy.

Now go back to the residence and go to the cave where you have killed the werewolf for the second time. You will have to do it again. This time you should have the possibility to touch Morkvarg with the fang.

Option B - Feed Morkvarg with his own flesh 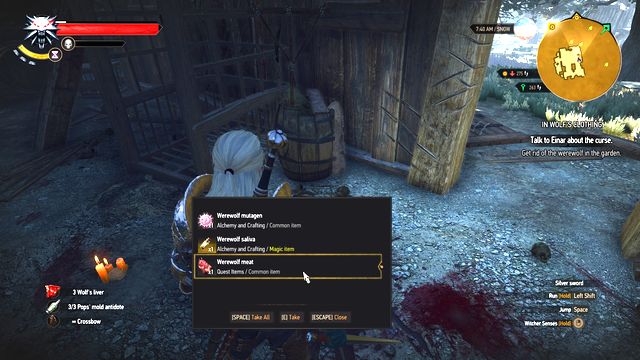 Don't forget about taking the werewolf meat from the body of defeated enemy.

This path is much shorter, but the only outcome is killing the werewolf. After you defeat Morkvarg the first time, take the werewolf meat from his body. Now go to the cave behind the place where you used the mechanism. Defeat the werewolf for the second time and, after that, talk to him and feed him with his own meat (it will be in the tab with quest items). By doing so, you will take care of him permanently and obtain the salmian brigantine armor. Go back to Josta and you will receive 85 gold pieces and the quest will end.

The Heroes' Pursuits: For the Goddess' Glory!

To learn more about this quest you must go to Larvik village and take the note from the notice board (M18,1). Now go to Svana (M18,3) who can be found near one of the exits from the village. You don't need to pay to participate in a race. However, you must first prove your skills. Three new quests will start, described below: 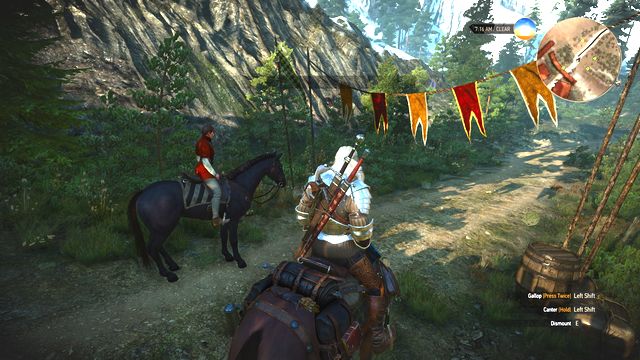 You will face only one rival in the final race.

Once you win all three races, go back to Svana. Talk to her and start the race. It will be neither long nor too hard, just stay on the road and watch out on the turns. For winning you will receive the best saddle (+80 to durability) and 90 crowns.

The quest will start automatically after talking to Svana (M18,3) in Larvik on the Hindarsfjall village. Go to the starting place of the race. It's located North from Fayrlund village (M14,9). Talk with the man organizing the race. The race itself is similar to other ones taking place on the continent. After winning you will receive 50 crowns and the best saddlebags (+100 up to the limit of capacity).

The quest will start automatically after talking to Svana (M18,3) in Larvik on the Hindarsfjall village. Go to the starting place of the race. It's located North from Rannvaig village (M13,10). Talk with the man organizing the race. The race itself is similar to other ones taking place on the continent. After winning you will receive 80 crowns and the best horse blinders (+60 to fear limit).

The quest will start automatically after talking to Svana (M18,3) in Larvik on the Hindarsfjall village. Go North from the palisade in Kaer Muire (M14,10). Talk with the man organizing the race. The race itself is similar to other ones taking place on the continent. After winning you will receive 50 crowns and a good saddle (+60 to durability).

For fame and glory 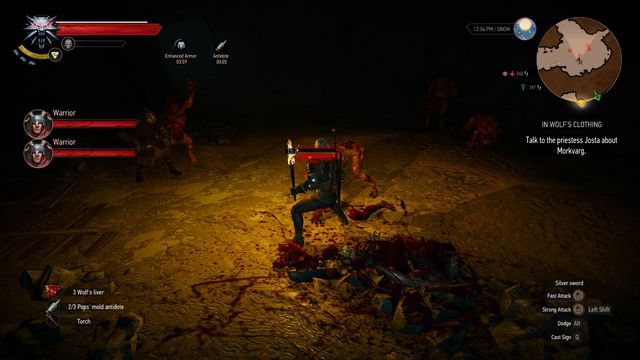 Before entering the cave don't forget to equip a torch. Otherwise you won't see a thing.

You will receive the quest from two warriors standing near a mine (M18,4), near the Larvik village. Talk with them and you will learn that there are monsters in the cave that must be taken care of.

Enter the cave, the warriors will accompany and help you. Inside you will face ghouls on level 15, alghouls on level 14 and a devourer on level 13. Once you eliminate all the opponents, you will receive 60 gold pieces from your questgivers.