This page of the guide to The Witcher 3: Wild Hunt includes walkthroughs for 3 witcher contracts from Kaer Trolde on Skellige Islands. Our walkthrough explains how to solve the mystery of the disappearance of Odhen's son, how to defeat the Fiend, how to deal with the water hag in the cave, who is the phantom of Eldberg, and how to eliminate the penitent. 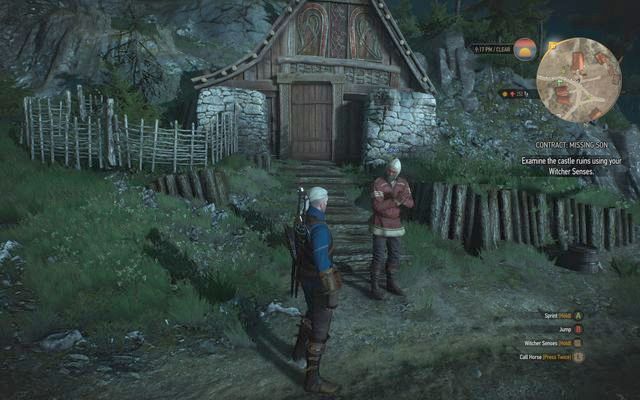 After reading the note at the notice board in Rannvaig village (M13,1) go to Odhen standing nearby. Start the contract with negotiating the reward - 300 crowns will be accepted immediately. The man will tell you that his son is missing and will send you to castle ruins South of the village. At the entrance to the castle you will notice a body. This is the moment when you should prepare for battle. A fiend will be your enemy. 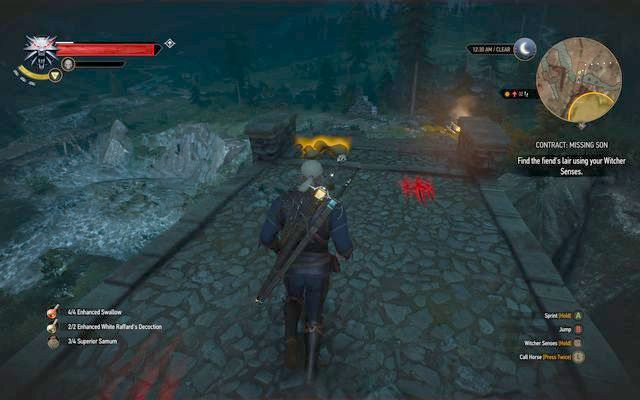 After a short battle (taking about half enemy health points) you will be hypnotized and the enemy will run away. Find his track and follow him to the ruins of a village on the other side of the river. Prepare yourself for the second battle, this time till death. Fiend will have replenished health and the battle will go similarly to previous encounter. Use relict oil before the battle and fire and flash bombs during it. 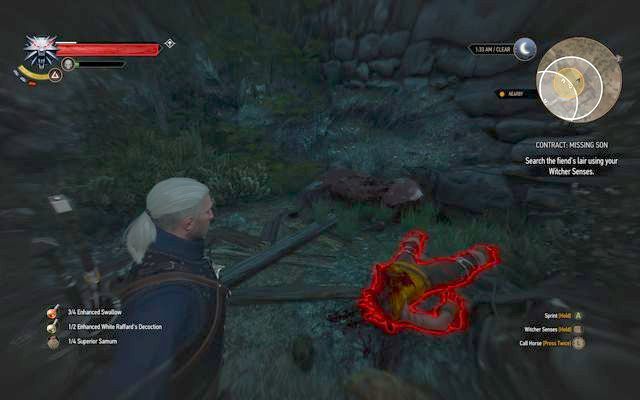 The body of missing Odhen's son

After you take care of the monster, search through the northern part of the ruins. You will find the body of a missing boy. Now you can go back to the quest giver for your reward. Another reward will be fiend trophy which gives +5% experience for killing monsters.

The main reward for completing the quest is a fiend trophy : + 5% experience for each killed monster. 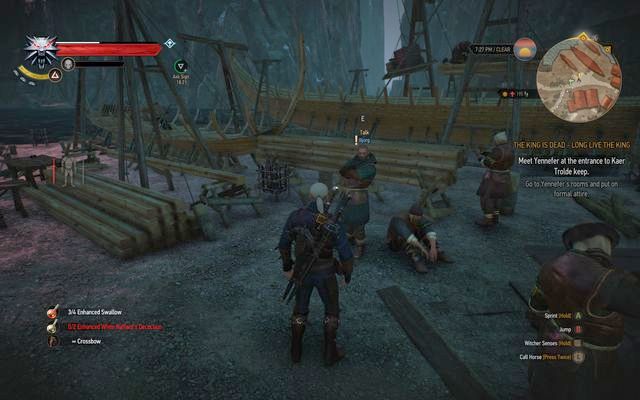 Talk to Bjorg near the notice board (M13,14) in Kaer Trolde. Negotiate the price for contract - 280 crowns is a safe price - and go talk with the witnesses (one will be enough) of the monster's attack. 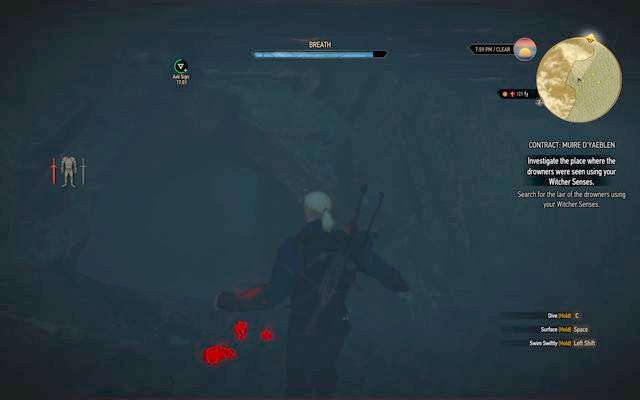 Underwater tunnel that leads to the cave

Then go to the place of attacks - both markings on the map show entrance to the same cave. After walking inside, use necrophage oil because in a moment you will face a group of drowners (level 18). Try to set the gas on fire at the place where they are standing, it will deal large group damage. 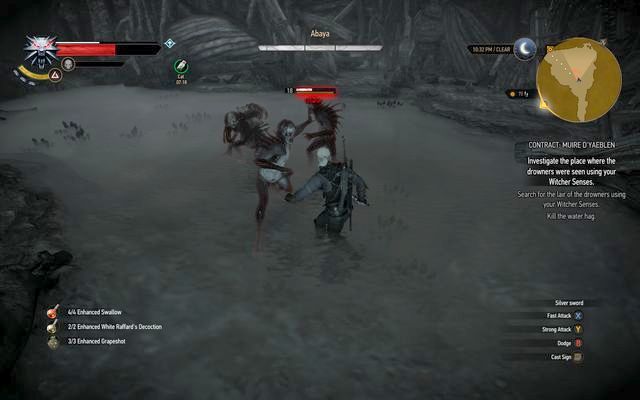 In the next grotto examine monster's marks. You will learn that a water hag will be your enemy. To lure her, prepare (unless you have it already) Drowner pheromone potion and drink it, then hide in the gap between the rocks.

After waiting a while, two drowners (level 18) and a water hag, who is your main target, will appear in the grotto. First take care of the drowners. Fire bombs and Igni will be your main tools to use in the battle with water hag. Collected water hag trophy will allow you to obtain additional 5% experience for killed enemies of any type. In this case, when you go back for reward, you will be able to force additional payment, around 70 crowns.

The main reward for completing the quest is the Water hag trophy: + 5% experience for each enemy (any type).

Contract: The Phantom of Eldberg 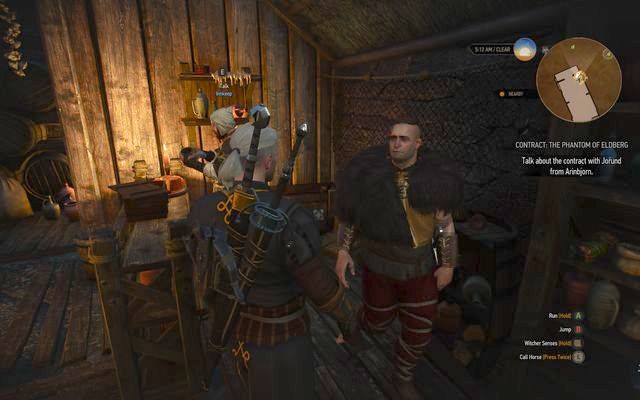 Talk to Jorund in the inn

The quest will be available after completing the first main quest on Skellige - The King is Dead - Long Live The King.

You will receive it from Jorund in the inn in Arinbjorn village (M14,11). After agreeing on contract price (around 270 crowns), go to the island North-West from the village. On the northern side of the island you will find a lighthouse. 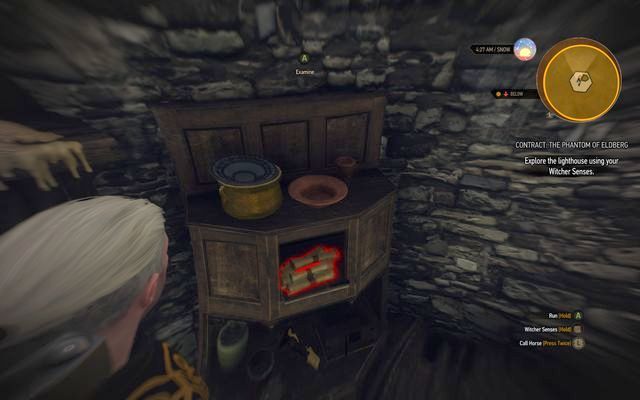 Letter in the lighthouse (I floor)

On the way you will find Mikkjaal's house and he will tell you the details of the quest and will give you a key to the lighthouse. You will have to deal with some wraiths (level 15) on the way. At the first set of stairs leading to the lighthouse, you will notice with the witcher senses some markings that will tell you that you're dealing with a curse. In the lighthouse, on the first floor, you will find a drawer and a letter inside. Read it and go back to Mikkjaal. Now, prepare for battle with wraiths by placing the proper oil on your sword. 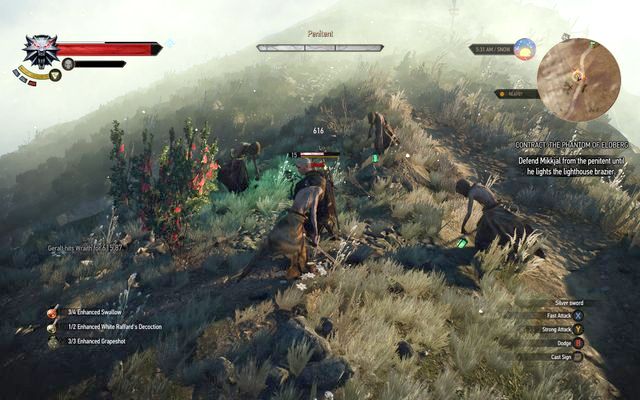 Leave the house with him. Repel attacks of the penitent and, from time to time, of his smaller friends. The damage done to the enemy will be very small until the lighter will light the lighthouse. However, it doesn't mean you shouldn't attack him during that time. After a won battle, take the wraith trophy - 5% additional experience for killed enemies. Finally you can decide Mikkjaal's fate - you can exile him or let him stay. Now go back for reward. 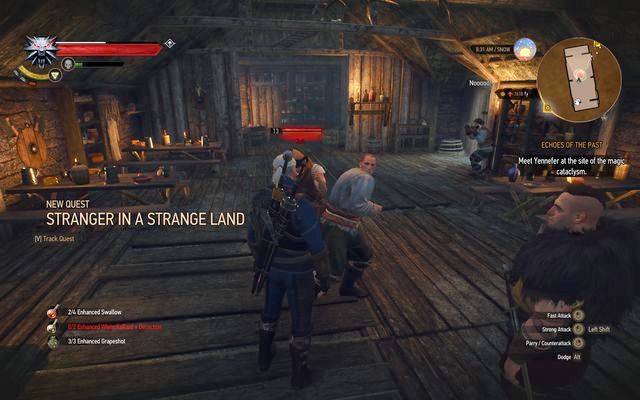 However, it's not the end - after receiving your payment two thugs will attack you in the inn. No matter what you do, the fist fight will soon change into a sword battle and, no matter what you do, Jorund will die. A new quest will start automatically - Stranger in a Strange Land. We have described this quest on the page about side quests in the Kaer Trolde region.

The main reward for completing the quest is a wraith trophy : + 5% experience for each killed enemy.