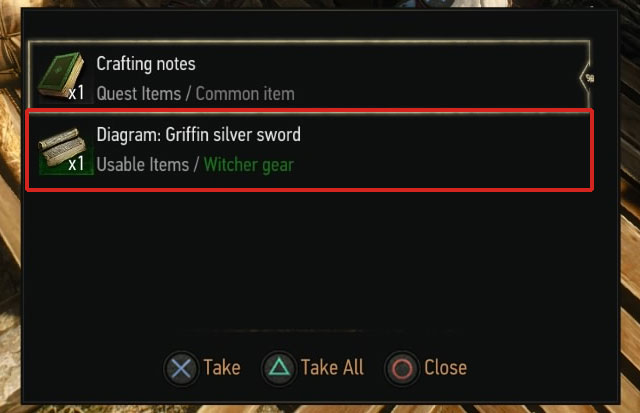 Witcher's equipment consists of Armor, Gauntlets, Trouser and Boots along with the swords - silver and steel. Two schools (Cat and Bear) also provide unique crossbows. Each of the set's elements (except for the crossbows) can be upgraded three times: Items can be enhanced, superior and mastercrafted. Creating each element replaces the one of a lower class (as it is one of the 'ingredients' of the schematic). Parameters change along with the required level needed in order to use the item. It may happen that you will find a schematic and creating it will create an item you won't be able to wear yet.

You should be equipped with a map each time you embark on a journey. You can buy them from different merchants (named in each chapter). Each map costs less than 100 crowns and activates quests connected to the particular gear element. The gear usually has four maps that go along with it. The first one concerns the schematics and a task for upgrading some of the gear elements whilst the rest enable you to upgrade the whole gear.

In the hidden chests you will find only the schematics and not the items itself. These schematics have to be used in a process, to create these items they are connected to. The cost for creating the upgraded elements of the set are always higher than its basic forms (preparation of ingredients, their price/rarity). If the crafter you have found isn't skilled enough, try to find another. On the Novigrad's square you will find NPCs creating the items of the second level. If you want to create a mastercrafted version, however, you will have to talk to the arch masters: Yonna from Baron's Garrison in Velen or Hattori who lives in the dock district of Novigrad. Both of them require the completion of their quest in order to be able to use them for crafting.