This page of The Witcher 3 Wild Hunt guide covers the walkthrough of the only side quest associated with Spikeroog - Master of the Arena. The walkthrough describes how to behave when fighting Ull in the arena, and how to start receiving profits from the functioning of the battle arena,

Master of the Arena 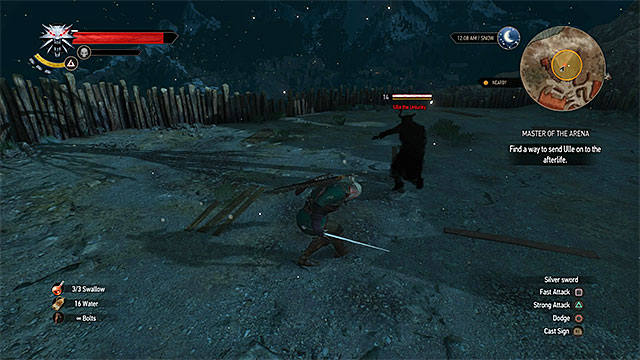 Don't attack the ghost during the second fight on the arena

In order to unlock this quest, you must go to Hov village and meet with the guard Lydrik (M15,3). He will tell you that there's a problem with the ghost of the local arena. No one is able to send it back to the afterworld. After taking the contract go to the nearby arena and meet with Ulle there.

After the finished conversation, the battle will start. DON'T ATTACK Ulle in any way, instead just stand in one place and let him deal damage to Geralt. Depending on which experience level you are, the duel will end after you lose small amount of health or after almost whole health bar will be depleted (don't try to heal yourself!). Using this tactic will allow Ulle to go to the eternal rest.

Now you can return to Lydrik and receive 15 crowns of reward. Additionally, you will learn from him about the start of preparations to return the battles to the arena and that you can receive part of the profits from that operation. In order to definitely finish the quest, first move for a moment to other part of the game world (for example, to Velen or to White Orchard) and then return to the village. Arena should be active now and Gunnar will share first profits with you (20 crowns).

Important - The quest will end, but if you want, you can frequently return to the arena and receive new payments. This can be a way to earn some extra money, although the payouts won't be too great.