At the main road (M12,2), near the military camp, you will find a nilfgaardian woman. During the conversation she will tell you that she is looking for her son. She will ask you for help. First go to the quartermaster. He won't be very talkative. To make him tell you something useful, you will have to pay him 150 pieces of gold or use Delusion on level 2. From him you will learn that the soldier has deserted a while ago and run to the swamps. 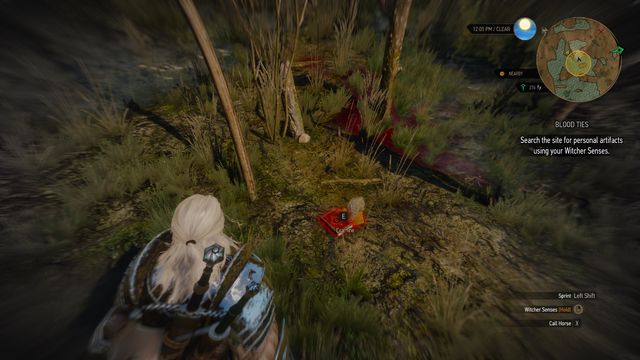 There's a book near the gallows which you must examine.

If during the Patrol Gone Missing quest you take care of the wyvern and won't mention the dead prisoners you found, the Quartermaster will own you a favor. In that case he will tell you for free that the squad of the woman's son has been ambushed and decimated on the swamp. It's unknown whether someone survived.

No matter what you hear, you must go to the swamps. When you reach the marking you will have to defeat 4 ghouls on the 9th experience level. Search the neighborhood with the witcher senses. First find the trail on the ground, then the hanged soldier. To be sure, find a book near the gallows as well. Now you can return to the nilfgaardian woman and tell her about the death of her son. You can decide whether you tell her that her son has died in combat or admit that he has deserted. No matter how you act, you will receive 50 pieces of gold.