On this page of the Witcher 3 Wild Hunt guide you can find a walkthrough for Now or Never side quest. This mission holds some importance for further travels, even if it is a side quest. We begin it in Novigrad, and it involves Triss Merigold. The solution below shows the penalty for ignoring this quest, how to save Anisse and Berthold, how to safely get through the canals, how to defeat the vampire and how to use the opportunity to kindle a permanent romance with Triss. 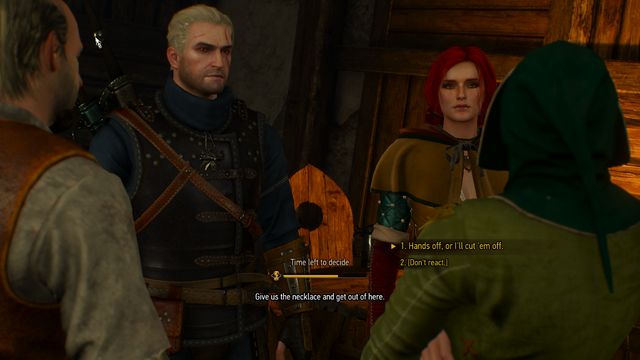 Help Triss or let her give up the necklace

It's one of the quests that have impact on the ending of the game. You will decide the fate of mages in Novigrad by completing or ignoring this quest. Sadly, no matter the decision you make, both endings are bad.

It starts after the main quest Get Junior when, after the conversation with King Radovid, a passerby will give you a letter from Triss. After reading it, go to sorceress' house. During the conversation you can decide whether Triss should give the necklace to the house owners - let it happen by standing on her side. After a short conversation you will leave the building and three Witch Hunters will attack you. 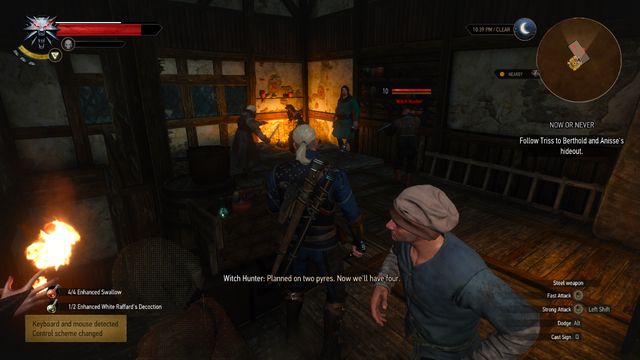 Quickly kill the Hunters, before they hit the sorcerers

Triss will tell you about two people that haven't managed to get to the appointed meeting. You can decide whether you want to save them. If yes, follow the sorceress to the pointed house.

You must act quickly inside, otherwise the Hunters can kill the pair you are saving. You should have the Aard sign prepared and use it the very moment you enter the first floor. While walking down you can talk to building owners though it won't make any difference. Now follow Triss to the inn. If you decided to help those two, the inn owner will die and you will have to take care of three more Hunters in the inn. 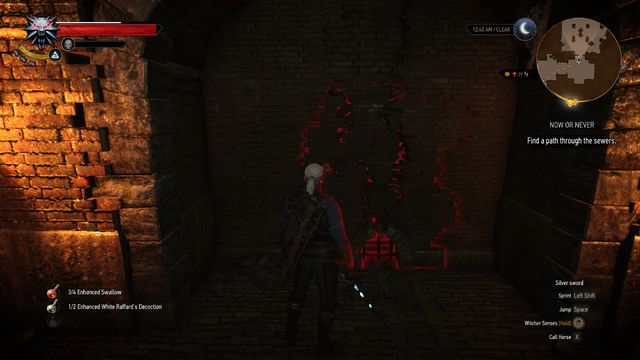 Passage to the library

Your task is to clean the sewers. Make sure Triss is following you, without her you won't open the closed door. Place the Necrophage oil on your sword, Muckixer (level 14-15) will be your main opponents in the sewers. Walk down the stairs and go to the nearest turn left - on the right side you can destroy the wall and take the Disglair sword from the chest.

Then destroy the wall in the screenshot above to make a passage - you will reach the library in which you can collect some books. Destroy another wall and keep going through the sewers until you reach the exit. 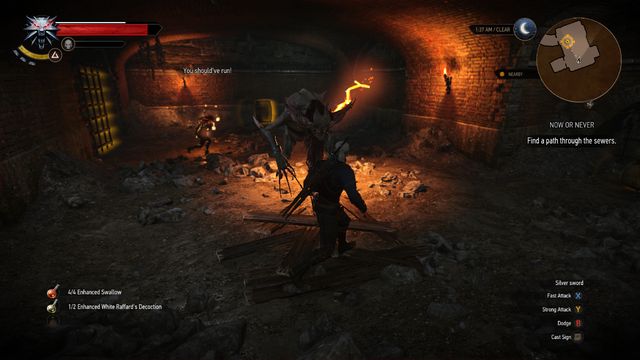 Katakan in the sewers

Before leaving you will be attacked by the Katakan - a vampire on level 14. When you reach the port, the final battle with Witch Hunters will await you. It will be easy because you will have some help.

After the battle an important moment will occur: It's the last chance to tell Triss you love her and start a relationship (it will impact the game ending). You will have limited time to make the decision, hesitation (the middle option) will be considered as refusal.

There is an entire page dedicated to romances - visit Romances and love scenes section in our guide to learn more.

Finally you will receive an proposition from Dijkstra. It will also start the optional quest A Deadly Plot in which you kill king Radovid - it will have impact on the game ending as well.