On this page of the Witcher 3 Wild Hunt guide you can find a walkthrough for Count Reuven's Treasure story quest. Our guide shows the way through the canals, helps to complete the quest discretely, answers the question what to do after Mengo men's appearance, and shows how to finish the escape scene.

Finding clues in the canals

The quest officially starts during the Get Junior (M6,21) mission, when you ask Reuven about Dandelion.

You will go to the sewers. Search for clues by using the witcher senses. Check the pipe on the wall and a sewer bar. Dink the potion you received from Sigi that protects you from the poisonous gas - you have its recipe now as well. 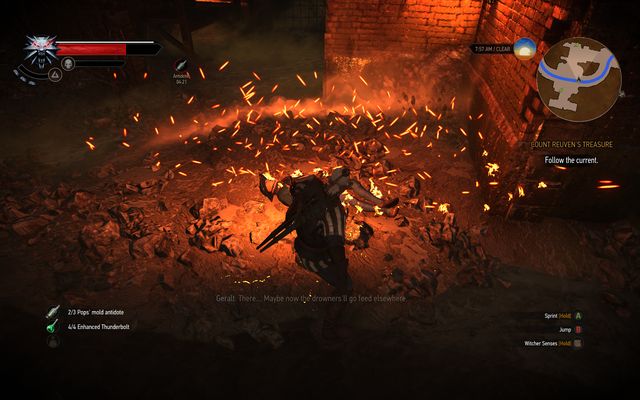 Burn the bodies to save yourself the trouble of fighting drowners

The potion works for seven minutes. Use the witcher senses through the whole way. You will find new clues and 3 jewelry pieces for your equipment. You will find two bodies on the way as well - burn them so that they won't lure any drowners (level 9). The most important thing is found at the end - a bomb part. Pick it up and go back to Sigi.

Checking out the pools in the bathhouse 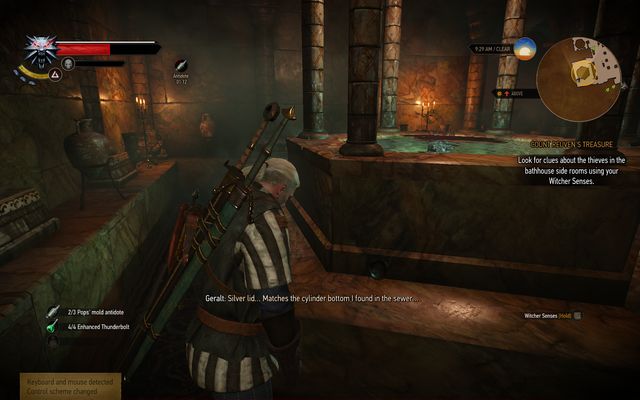 Check the second bath while searching for clues 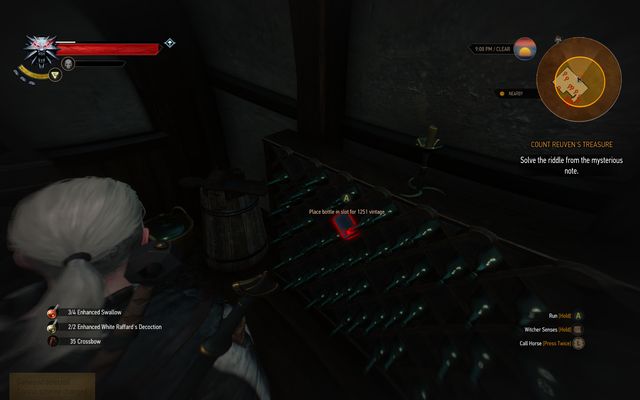 Place the wine from the table to the empty place

Now go to the pointed house in the city center. Search for the clues there. On first floor you will find a bottle of wine, in the neighboring room some shelves with wines. Place the bottle in the empty spot to unlock a secret passage. Inside you will find some documents. After returning to the ground level and talking with Dijkstra, go back to the shrine at around midnight to meet with Triss.

The next part of the described quest can be completed in two ways - maintaining your cover at all costs (variant A) or simply getting into a fight with enemies (variant B). Both varians are described in detail below. 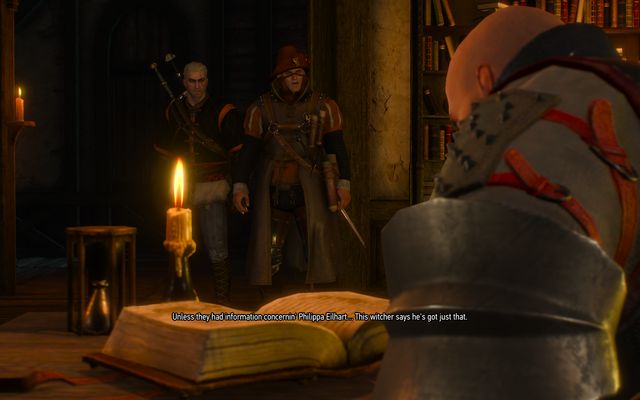 Take Triss to the walls and talk with the guards. You can't defend the sorceress immediately or the ruse will fail. Thanks to that you will get inside.

While Geralt will be invited to Menge, Triss is going to be tortured. If you want to remain undetected, you must keep the careful conversation until your talker checks the room nearby. 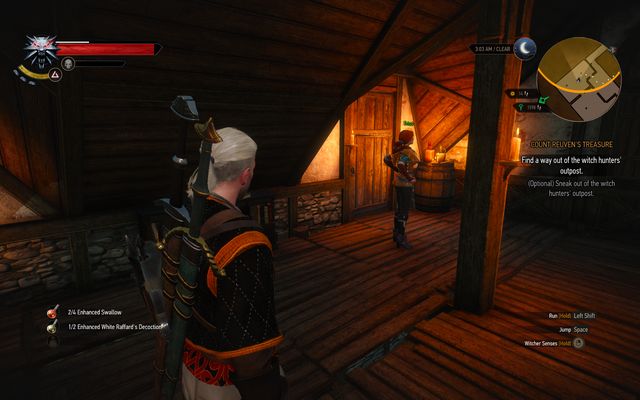 Walk outside through the door to avoid fighting guards

He will be killed by the sorceress when you have gathered enough necessary information. Search the body and walk outside - thanks to that you will avoid fighting guards. After the escape (described below) you won't have to walk anywhere else after talking with Dijkstra.

When you take Triss to Menge he will want to take her to prison. You can object to that whenever you want. Immediately after you do it, a battle will start.

You will have to face more than a dozen of witch hunters on level 9. Luckily they won't be in one group, try to eliminate them one after another. Do it quickly as new ones will come regularly. Go deeper into the building while killing further enemies on the way. Triss will help you but not too much. Walk upstairs, defeat the remaining hunters and executioners. In the room on the right you will find Menge. You must defeat him. If you start with taking care of his allies, he won't be a hard opponent. Take the Gilford Sword from his body. 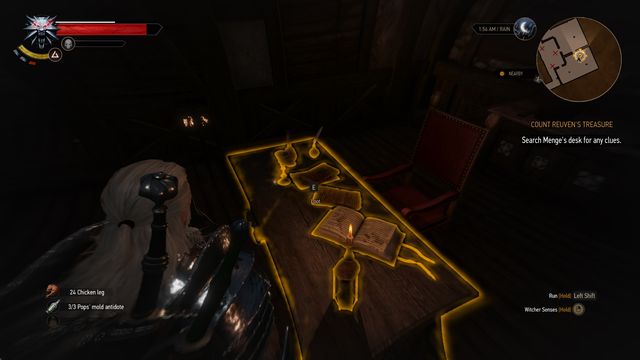 Take the letter and the book from the table.

Triss will tell you to search for documents that will allow you to find Dandelion. Take the book and the Letter to Caleb Menge from the desk. Read it. A short scene will start during which the sorceress will give you a mysterious key and the key to the vault found at Menge's body. Your task in the Witch Hunters' building has ended. But don't leave it yet. First explore a bit and collect all valuable items.

After escaping (the description below) you will have to meet with the spy. 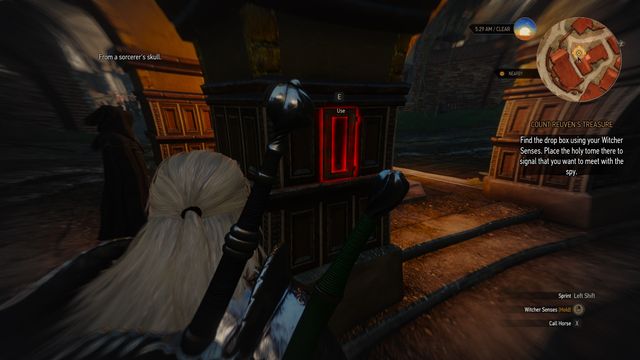 Place the book in the box that can be found behind one of the shrine's pillars.

Go to the place where the box can be found. You will it at the back of one of shrine's pillars. Place the book you obtained before inside. Now go to the meeting. Enter the building and hide behind the door. Use meditation to wait till midnight. After you do it, instead of the spy you will find... Triss. Luckily, a moment later the person you are waiting for will enter.

When the talker won't want to answer to questions, the sorceress will start torturing him. You will receive all information you need. You will learn, among other things, that Dandelion is on the temple island. Before the conversation ends, you can decide whether you want to kill the spy or wipe his memory.

Escape and finishing the quest

After you loot the container and bodies of fallen enemies walk out through the door in Menge room. To get to the backyard jump on the small shed, then to the wall surrounding the whole mansion. If you do it in the right place Geralt shouldn't be harmed. Now all that's left to do is to destroy the brick wall with Aard sign and you will be free. 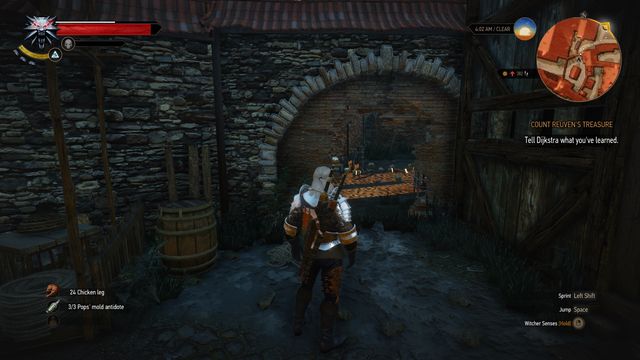 After walking through the corner one of Djikstra men will talk to you and lead you directly to the man. During the conversation he will tell you that he found out who was the real mind behind the gold theft. Despite that he will help you find Dandelion and he will tell you where you should meet the spy from whom Menge had the letter on his desk. You will receive 90 crowns as a reward as well. At this point a side quest related to Triss will start - A matter of Life and Death. The walkthrough for this quest can be found in side quests in Novigrad page of the guide.

Finally you must talk to Priscilla - the poet that you met earlier. She can be found on the first floor of the inn. After that the quest will end.