This page of the Witcher 3 Wild Hunt guide offers a walkthrough for Get Junior story quest. The solution below offer tips regarding the meeting with Sigi Reuven, infiltrating Junior's hideout, meeting Vernon Roche, finding Junior and deciding upon Junior's fate. 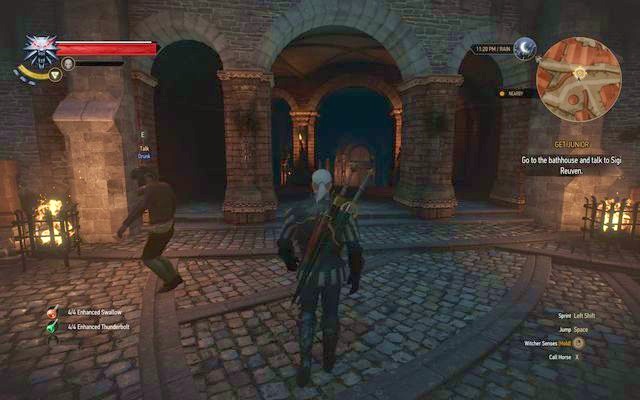 Entrance to the baths is on the lower courtyard

After deciding on another contract in Broken Flowers main quest, go to the baths (M6,21) to meet with Sigi Reuven.

During the conversation few assassins will attack you - although you don't have your sword and armor, you should take care of enemies quickly.

When you finish asking Sigi about where to look for Junior, you can leave the baths. However, if you start asking about Dandelion, you will start Count Reuven Treasure main quest. You can play Gwent with Sigi as well - he is one of the main opponents in the Gwent: Big City Players quest (a series of optional quests connected with this minigame).

After completing this phase of the quest, you will receive a side quest The Gangs of Novigrad as well - to find the walkthrough, visit side quests in Novigrad page of the guide. Completing the quest is not mandatory.

In the second phase of the described quest you must decide how you want to complete it. You have two options: "like a spy" - by gathering information and completing further steps or "aggressively" - in this option you act with your sword. In the second option simply walk into buildings by killing the guards and take all needed items/information. The walkthroughs for both variants can be found further below in the guide.

You can visit Cleaver (The Gangs of Novigrad side quest) immediately after leaving the baths. He will provide you with the support of dwarves whenever situation will get messy. You can enter with them to a location with the use of force or safely gather information and, when you are caught, the dwarves will come to your aid.

On the arena and in the casino you will find evidence that you can take immediately to Dijkstra. Then you can go meet Vernon Roche. You need to search through only one of those locations not including the Junior's hideout. 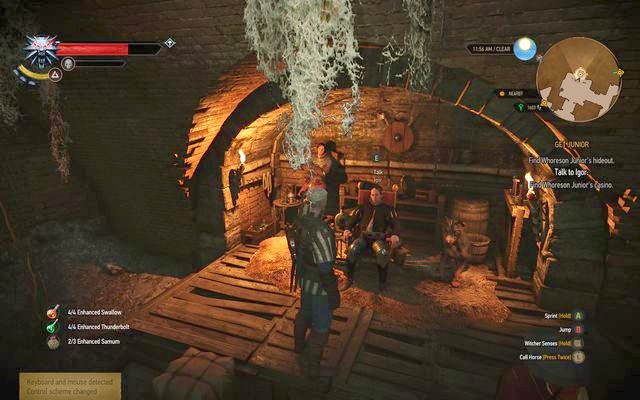 Igor is setting the fights, next to him you will find a chest

To enter the arena you must bribe the guards (100 crowns) or use Axii sign - if you attack them, a large group of Junior's men will be hostile towards you. Talk to Igor. Don't mention Junior because it might lead to identifying you. After the conversation you will move to the arena. Here you must defeat few enemies and monsters: 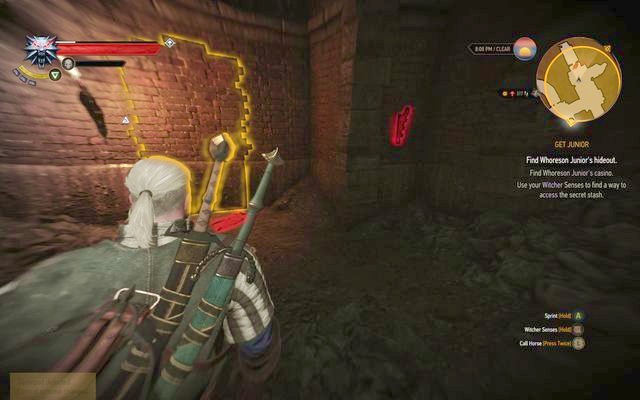 Secret passage opened with a torch

Finally you will be attacked by Junior's men anyway and Cleaver's men will attack the building no matter whether you have participated in The Gangs of Novigrad side quest. 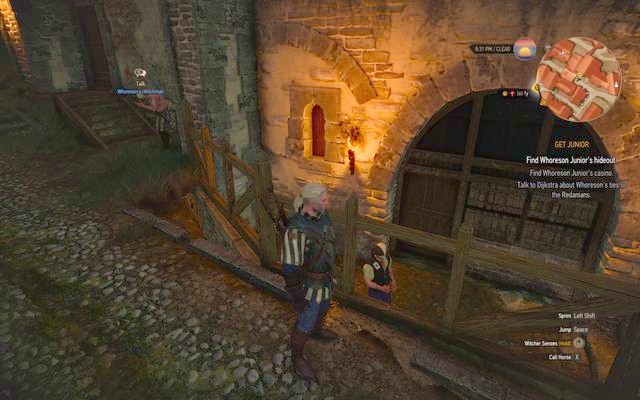 Entrance to the casino

You can enter the casino in similar way - bribe (200 crowns) or use Axii sign on two guards. During the conversations with casino guests avoid talking about Junior - it will immediately start the battle.

Actually, the only thing you can gain by entering the casino peacefully is the opportunity to play Gwent with two of the three guests on the ground floor (two in the corners of the room offer game for 100 crowns, the one in the middle - for 50). After winning two games, you will be taken to the interrogation room anyway and forced to fight. 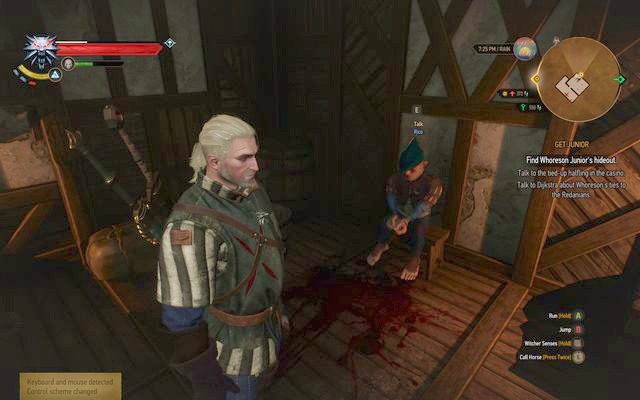 The midget Rico in interrogation room

In the room on the highest floor you will find Rico - he will give you information for Dijkstra. After freeing him you will receive the Honor Among Thieves side quest the walkthrough for this quest can be found in side quests in Novigrad page of the guide. 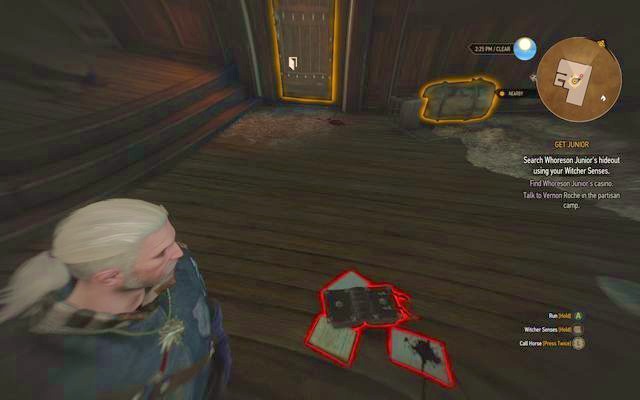 When you reach the place you will find out that Cleaver's dwarves have been here before you. Examine the book on the ground floor, the laundry and the hanger on the first floor - you won't find anything interesting. No matter in which order you completed successive steps of the quest, go to the next mission objective.

If you want to complete the Get Junior quest in an "aggressive" way, start by going to Cleaver and talking with him about it. Agree to help his men in attacking Junior's places. 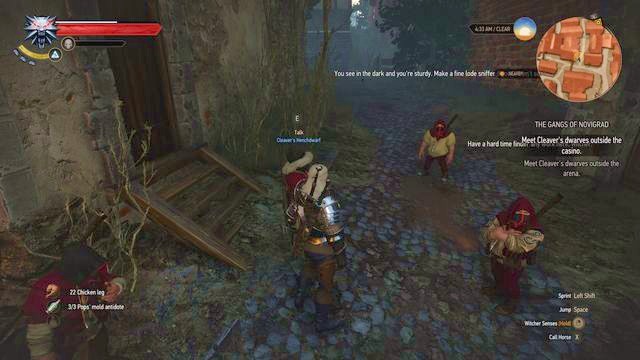 To attack the casino, talk with Cleaver's group of dwarves.

First go near the casino and meet with Cleaver's men. Talk with their leader. Tell him when you're ready. Defeat two men at the entrance (12 level). Inside you will find around 10 enemies on a similar level spread throughout three floors. Try to eliminate them one after another, the dwarves will be a small help.

Now you must search the whole casino. Go to the room on the second floor where you can find Rico. Talk to him. You will learn that Junior has an agreement with Redanians. You will have to decide whether you free Rico or leave him be. If you decide to free him, remember to go some day to Bedlam for a reward (Honor Among Thieves side quest). 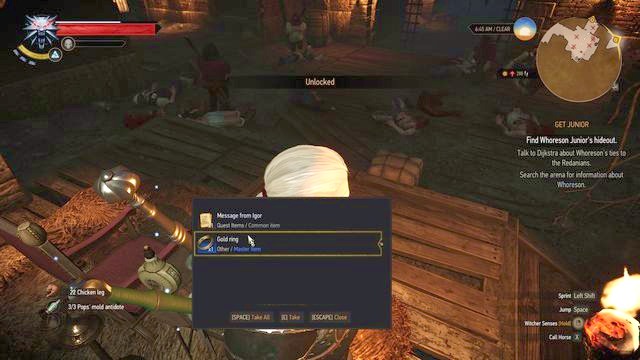 Take the letter and the ring from the chest on the desk. One of Junior's men has the key.

Now go near the arena. Cleaver's dwarves should be waiting for you there. You must defeat two enemies on 12 level at the entrance. Enter the underground. You will find two groups consisting of four Junior's men. In next large room you will meet another, this time larger, group of around twelve enemies.

There will be a chest lying on the desk. To open it you will need a key. You will find near the body of one of enemies you have defeated - Igor. Take the letter (Message from Igor) and a ring from the container.

After you gather information from both places, go back to Cleaver. He will thank you for job well done and will give you 300 crowns. The quest will be completed. 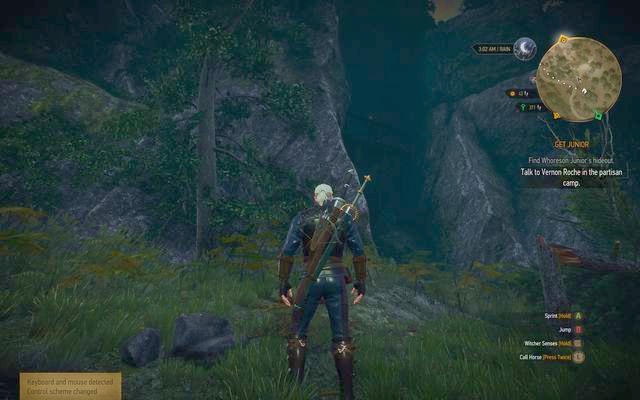 After you deliver information about the relationship of Junior with the Redanians to Dijkstra, he will point you to a new trail - meeting with Vernon Roche in his hideout. Go there and, after a short conversation, both of you will go to Oxenfurt to meet a spy.

Instead of a spy you will meet king Radovid there. After a conversation you will receive An Eye for An Eye side quest from Roche (we described this quest in the side quests in Novigrad page of the guide) and you will learn of Junior's whereabouts. Go few streets further to the door of your targets mansion. 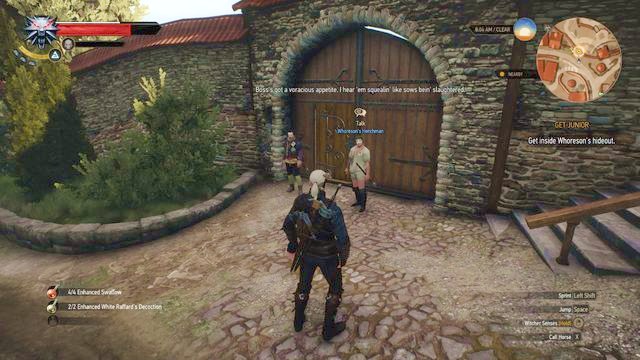 The gate to Junior's hideout

Two guards will stop you at the door (level 11) - you must kill them no matter the conversation. Take the key to the gate from one of them. Before entering inside prepare yourself - potions, oil for the steel sword. Inside you will have to fight large numbers of Junior's men (level 11-12).

After you deal with them, enter the largest building in the middle, dispose of three guards and walk to the first floor in order to talk to Junior. 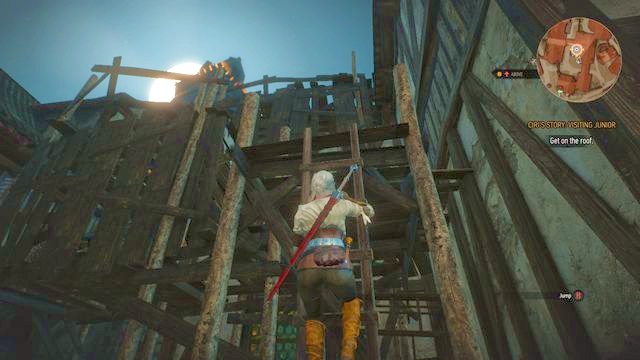 By using the ladder you will reach the roof

During the conversation Ciri's story will activate. First walk up the ladder to the roof, jump to the balcony and interact with the window. After a short scene, a duel will start. The heroine will receive new skill that allows her to deal small damage to each enemy. Use this skill wisely because after the sequence of attacks you appear in a random location and can be attacked by enemies. You can't use counterattacks so it is best to use long jump to get through the enemy, appear behind him and deal strong damage to his back. Before walking to the lower floors, wait for your health to regenerate. 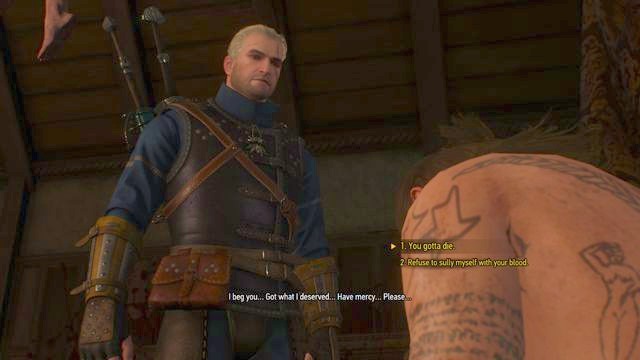 Finally you can decide the fate of Junior's. It will impact the game's ending in which this plot will be mentioned. You can pick one of the two options:

After this quest, two more will automatically start: The Play's the Thing and forced continuation of A Favour for Radovid - the quest is simply about talking with the king and receiving Redania's Most Wanted quest in which you must find sorceress Philippa Eilhart. Walkthrough for this quest can be viewed in side quests in Novigrad page of the guide.

After leaving the ship you will additionally receive a message from the passerby that will start the Now or Never quest.