This page of The Witcher 3 Wild Hunt guide explains the skill points. We present the available abilities and write how to use them (they aren't activated automatically).

Getting skill points - how? 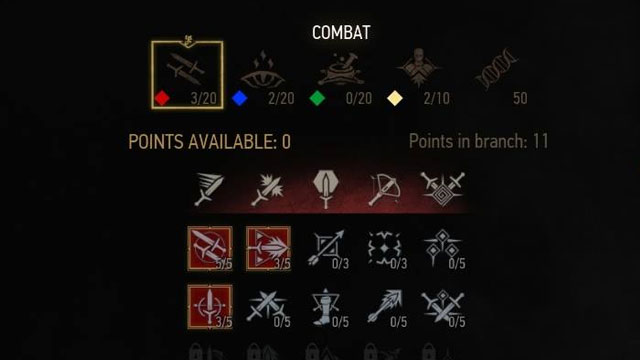 Leveling up is always rewarded not only with character's statistics boost, but with receiving one new skill point as well that can be spent on buying new skills.

Skill points can be also obtained each time you find a new Place of Power and interact with it for the first time. Since there are sixteen various Places of Power to be found, you can greatly improve your character development thanks to them. Locations of the Places of Power can be found in our walkthrough.

They can be spent both on unlocking completely new skill and on upgrading one you have unlocked previously. Except for the skills from the yellow group, most of them have some upgrades available (up to 5 per single skill).

Very important thing is that buying a skill doesn't automatically mean that it's starting to work.

In order to activate a skill you must first move it to one of the slots in character window. There are twelve such skills in total. However, at the beginning of the game only one is available and new ones are unlocked as you gain new levels (all slots become available on level 30).

So you should, at least at the beginning, focus on a small number of skills and spend new skill points mostly on upgrading the skills you already have instead of buying new ones.

Next levels of skill trees - how to unlock?

Another important matter is related to the skill trees in various categories. The next levels of Combat, Signs and Alchemy trees are at first unavailable. In order to gain access to them you must spend some skill points in the specific category.

Best skills from a category become available after spending around 30 skill points. Because of that, you should think whether it wouldn't be better to focus on specializing in one category instead of using all of them.

Some herbalists met during the game can sell you for 1000 crowns a mixture that resets your skills. One of the herbalists can be found in a hut north-east of Oxenfurt.

You can buy the potion if you're not happy with decisions you have made. We recommend saving the game before assigning skill points again - you won't have to spend more gold when you decide that you want to change something.