This page of The Witcher 3 Wild Hunt guide contains walkthroughs for 2 witcher contracts taking place or involving Oxenfurt. Our guide explains how to track down the creature from the Oxenfurt Forest, how to defeat Opinicus, and how to locate the katakan.

The Creature from the Oxenfurt Forest

You will receive first information about this quest by reading the note on the notice board in Oxenfurt (M8,2). To receive more information you must go to a small mercenary camp east from the city (M8,4). There you must find Hans of Cidaris and talk with him about the contract. The monster has kidnapped his two colleagues. Sadly, he won't help you with determining what sort of monster you must deal with. But you can bargain for better reward. Hans should agree on 330 gold. 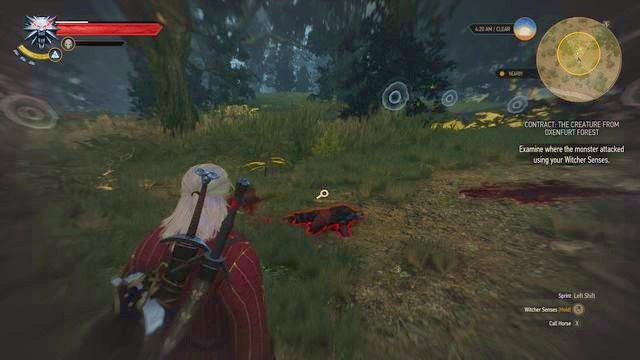 Go to the marking and then follow the trail that will lead you to the monster's nest.

After taking the contract he will tell you search for some tracks around 200 meters east from the camp. Go to the center of the marking, there you will find a blood mark and a body that you must examine. Follow the trail and you will find a severed hand. This will tell you that the monster is flying.

Next to the hand you will find a trail to follow. After a while the trail will disappear. From now on you must follow the birds. Use the witcher senses and look at them. The birds will be marked with red. Follow them. After around 50 meters you will reach a nest of a large griffin - Opinicus. If you go closer, the enemy will see you and attack you. 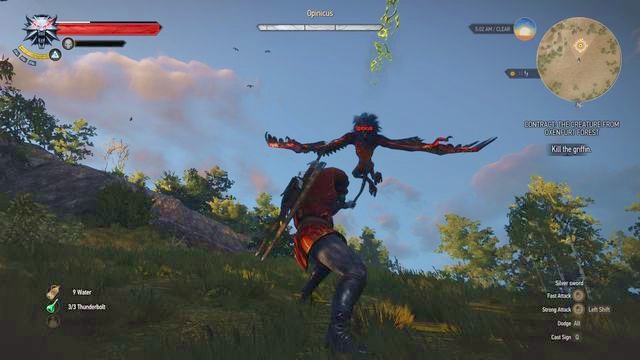 Use the crossbow to get the enemy down to the ground.

During the battle try to avoid enemy attacks and use Quen sign to avoid receiving damage. When the griffin is in the air you can try hitting him with the crossbow. It is best to use exploding bolts for that, as in addition to bringing the monster to the ground, they will deal him additional damage. Try to attack the griffin from the back. Because the Opinicus regularly goes back to the air, the battle might take some time.

After the battle take the precious alchemy ingredients, trophy and a very good Zirael Armor from the body. Now go to the griffin's nest, examine it with the witcher senses. Take the letter from the body remains. From it you will learn that the mercenaries you work for have taken the griffin contract earlier and for a bigger reward than you work for. During the conversation with Hans you might mention it and you will receive bigger price, around 500 crowns.

You will learn about this contract from the notice board in Oxenfurt (M8,2). You will receive more information from Nicolas Friedman who is standing on the wharf, near one of the ships (M8,5). Before accepting the contract you can bargain, Nicolas should agree on 290 coins. Sadly, he doesn't know much about your target. However, from the conversation you will learn that you should ask the medic who is taking care of the bodies and one of the witnesses.

You will find the woman who survived the attack in the inn in the city centre. If you want to make her give you information, you must have Delusion skill on level 2 or pay her 30 crowns. She won't give you much information about the monster but she will point where she has been attacked. Go there and examine the territory with the witcher senses. You will find a bracelet behind the gate. 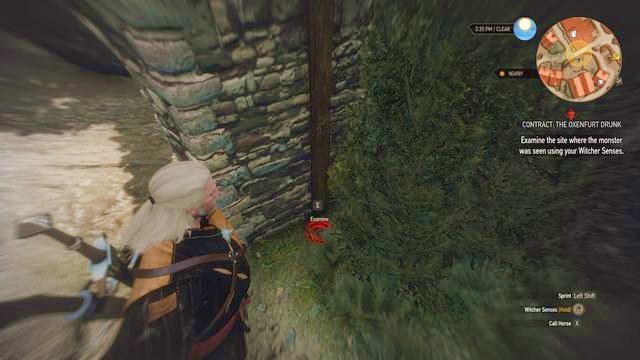 Now go to the Medic standing near a small hut at the beach. After the conversation he will give you a key to the building so that you can examine the bodies. After the investigation you will be almost sure that you are dealing with some sort of vampire - a Katakan called Gael. To lure him, you must... get drunk. So go to the inn and talk to the barman. You will have to pay him 50 crowns. When you leave the inn you must follow the markings. At the third try the vampire will smell you. After a while he will show, attack and disappear.

Now you must track him down with the witcher senses. The trail will lead you to a small hut on the city outskirts. 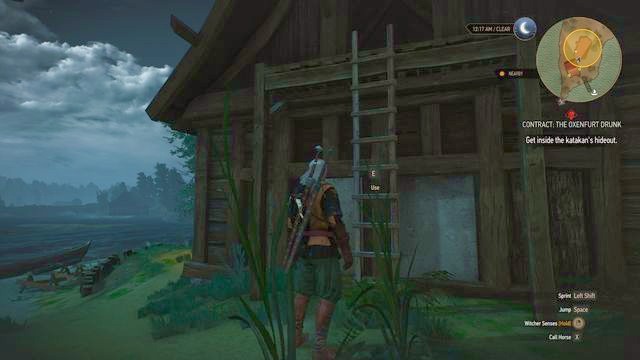 The door is locked so you must walk to the hut by using the ladder.

You must walk inside using the ladder. Try to prepare properly before the battle, put the correct oil on the sword and obtain some health regenerating potions. During the battle use Quen sign frequently and jump away from the attacks. After each vampire's missed hit, perform 2-3 quick attacks and jump away. After few such rounds you will defeat Gael. Take the trophy and some valuable alchemy ingredients from his body. The Katakan trophy will give you 5% additional experience each time you kill a monster. Now you must only return to the quest giver for the reward.