This page of The Witcher 3 Wild Hunt has strategies and tips that will help you win Gwent matches. We have prepared various hints on, e.g. recommended actions during the turns, the order of using the cards, or reacting to the opponent's moves. With our tips, you will have easier time winning the matches and unlocking the trophy for obtaining all the cards.

The following list has more advanced tips and strategies for Gwent. The mini-game's basic rules can be found on the Basics of the game page. 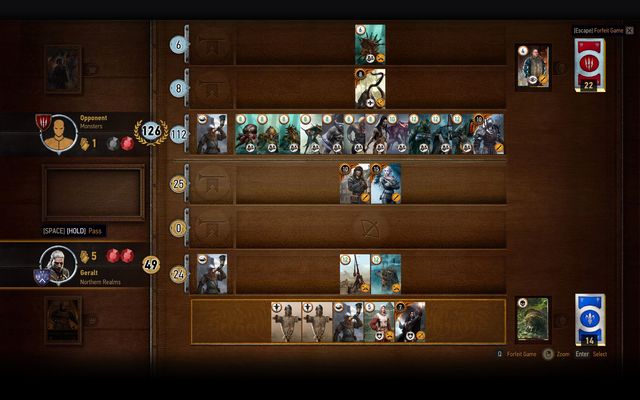 1. The beginning of the game is most important. Use weak cards in first rounds, try to keep the same amount of points as your enemy or have 1-3 points more than him. If you have them, use spies cards at first. They are moved to your opponent's side and they add points to his card set while you obtain two cards from the deck.

2. First round doesn't have to be won at all cost - computer is playing carefully at that point, he tries to lose as little points in winning cards as possible. If your advantage is too large, enemy will fold immediately. If you would have to lose crucial cards from which you intend to get many points - fold as well. After that, in second round enemy is usually throwing only one card or he is folding immediately, forcing you to waste the card.

3. Start each round with weak cards. Enemy can destroy your cards, so it's unwise to lose the strongest ones. If it's the last round, then start with unique cards (with stars) - enemy can't do anything with them. Wait till the end with all "buffs" - special cards that increase the potential of specific cards or whole row.

4. To secure yourself from special weather cards you should always have at least one card that resets negative effects. Use them at the end, unless you have weather cards yourself - then make sure that by wanting to clean your negative modifier and place another one on enemy you won't remove both modifiers at once.

5 Decoy is one of the better cards - it is especially useful in two situations: when you want to use a special card again (which, for example, allows you to regain "dropped" cards) or when you want to get a strong card back from the board to use it in another round (for example, when enemy has given up the round and you have much more points)

6. Each fraction has a weak point: