This page of The Witcher 3 Wild Hunt has basic rules of Gwent, the extensive card game available in the campaign. We write about, e.g. a table for the game, collecting cards for your deck, types of cards, and how a typical Gwent match goes.

More advanced tips for Gwent can be found on the Strategies and hints page. The tips listed below will help you learn the basics of the game. 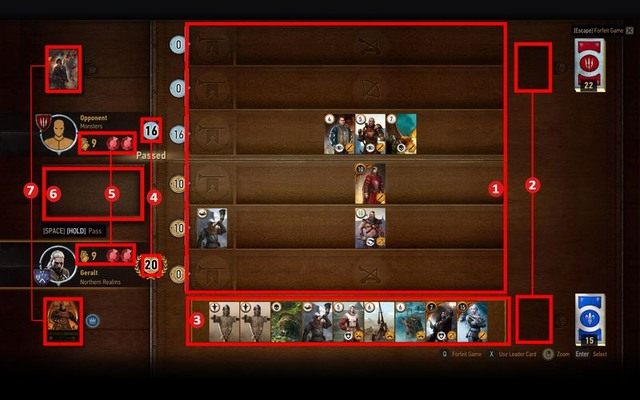 The game takes place on a separate board - a table. Below you will find the description of the interface elements.

1. Board - you place your cards on your side (bottom) and enemy places his on the top. Each side is divided into three rows - melee units, ranged units and siege units. On the left you can see a slot for cards that improve the statistics of each row.

3. Hand cards - here you will find cards from the deck picked for the game - these are the only ones you can use in the game

4. Score - this is where you can see your and your enemy's score. Below you will be informed if someone folded the round.

5. Card number - this is where you can see the number of cards you and your opponent have in hand. Crystals represent the number of wins/losses - when you lose, the crystal becomes gray.

6. Weather card slot - there are special weather cards available in the game. They affect whole rows of units - both yours and enemies. Active cards are visible here and on the board.

7. Leader card - a special leader card. After using it changes its color to gray. It is wise to know all these cards to know what you can expect from your enemy.

Each participant has his own card deck. The harder opponent, the more rare and unique cards he has. Before each game you can change or improve your own deck. However, you must do it wisely because the game has some rules:

If you already have 22 unit cards then you should eliminate weak links. Only exception to this rule are some Scoia'tael fraction cards and Monsters because of some special cards that add cards from the deck.

There are four fractions in Gwent: Northern Kingdoms, Nilfgaardian Empire, Monsters and Scoia'tael. You can play with any fraction as long as you have enough cards in your deck.

Each fraction is different - it's hard to use the same tactic in two different fractions. In addition to units and their skills, in case of fractions there are some additional factors that differ them from one another. One of them is fraction bonus - exclusive and constant skill of each race. They are as follows:

Each fraction has unique special cards as well - leaders. This card can be used anytime during the game - but only once!

Additional note - If you have Blood and Wine installed, you will be able to collect the fifth deck - Skellige Islands.

Unit cards have a visible number of points that are added during the game when a card is played.

There are also other cards that have no points. They have an impact on unit card's modifiers, positive or negative. You must remember that character's cards are excluded from the effect of special cards, including positive and negative ones. They cannot be returned back to the game after they were used as well. 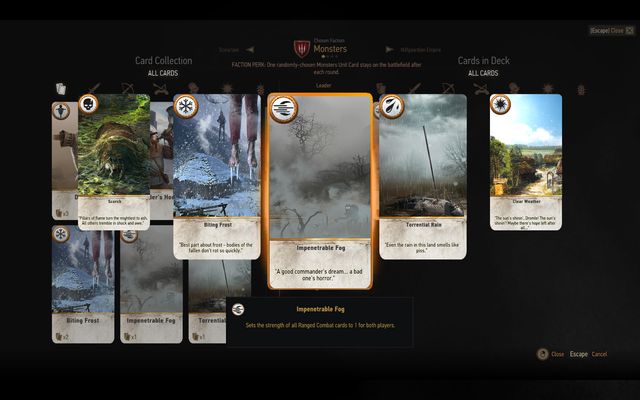 First group are weather cards. There are four: Biting Frost, Impenetrable Fog, Torrential Rain and Clear Weather. Each of them reduce the card strength in a specific row (for both sides) to 1. The Frost reduces infantry units, Fog reduces ranged ones and the Rain reduces the siege cards. Clear Weather card removes all weather modifiers. There might be more than one weather card active simultaneously.

Another interesting card is Decoy. It allows you to change any unit on the board and move it to your hand by replacing it with the decoy - which is later a neutral card. It is wise to use the decoy when your cards have special skills. There can be only one decoy in a row.

The penultimate special card is Scorch. It should be used wisely because it eliminates from the board a card or cards with the same strength - the highest one. Your cards can be affected as well.

The last card is a positive one - Commander's Horn. Placed in any row, it doubles each card's modifiers (excluding characters). It cannot be taken off, it works until the round ends.

Rewards for winning a match

A standard reward for winning Gwent game is a random card from random fraction. Sadly, you can play each opponent for a card only once. After winning the card, further games will end with you winning only alchemy ingredients or other supplies. A standard bet size with common challengers, like merchants, is 10 crowns.

Only exceptions are challengers from quests related to Gwent. By winning with them you can obtain a unique card, not available in any other way. You can meet opponents that will want to play for higher rewards during some parts of standard quests as well. Sometimes playing Gwent is even the only way to peacefully solve some problem or to negotiate.