On this page of the Witcher 3 Wild Hunt guide you can view the walkthroughs for 3 witcher contracts taking place or involving Free City of Novigrad. The solution below explains, among others, how to identify and successfully pursue the thief, how to defeat the doppler, how to find the clues in the bat house , how to defeat the succubus, how to correctly investigate the haunted house and how to deal with the earth elemental. 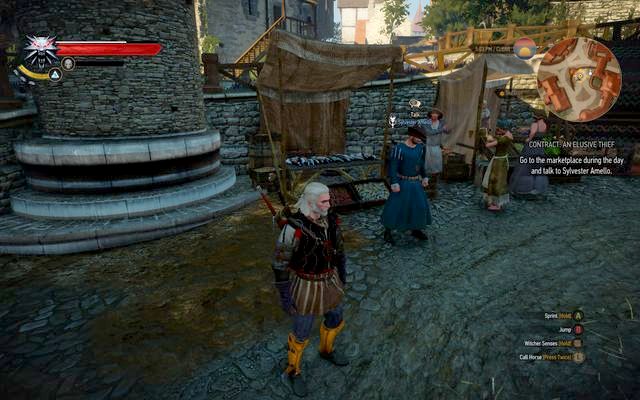 After reading the contract from the notice board (M6,3) go talk with the quest giver. You will find him near the market. What's important is that you can meet with him only during the day. His name is Sylvester Amello (M6,10). You can bargain up to 300 crowns for the contract. 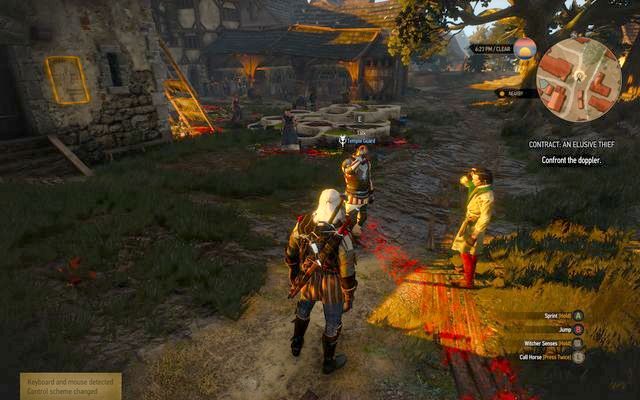 Follow the doppler trail on the street, through the gate. Another trail can be found at the river. It leads to a small house with the door wide open. Activate your witcher senses: on the first floor, you will find some clothes, on the ground floor a letter lying on the table - read it. Geralt will feel a smell - follow it and you will find the doppler not far away. After a cutscene, a chase will start - don't let him run away because it will end the quest.

You can't let the thief escape. If Geralt loses the pursued character, the quest will end in a failure. A good idea would be to create a save right before the pursuit itself. 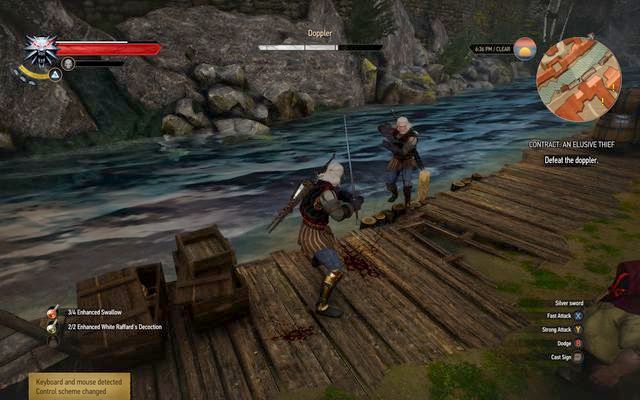 Doppler will change into you - but he is a bad fighter

When you get him, he will transform into Geralt and the duel will start. Watch out because enemy can use Signs. If you take down 2/3 of his health, he will surrender. Now you must decide his fate - if you make him fight, his health bar will be regenerated and you must defeat him. After the battle you will receive doppler trophy - +5% gold found, and good shoes. And you will receive the money reward (negotiations: up to 300 crowns).

A better decision is to free him. You will receive 215 crowns + half of the bargained reward from the questgiver and a diagram for a unique goblin sword.

Your reward for completing this task is a doppler's trophy: +5% to found gold. 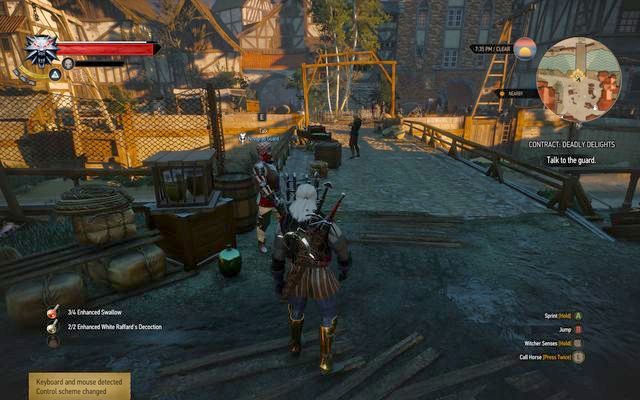 Search for some horseshoe trails. Investigate them and follow their trail - they lead straight to a public hose. The door inside will be closed - you must get inside through the second ones, from the river side. Talk to the owner to gain necessary information. It might not be easy - it is best to use Axii sign, in that case you receive both information and the key to the house. 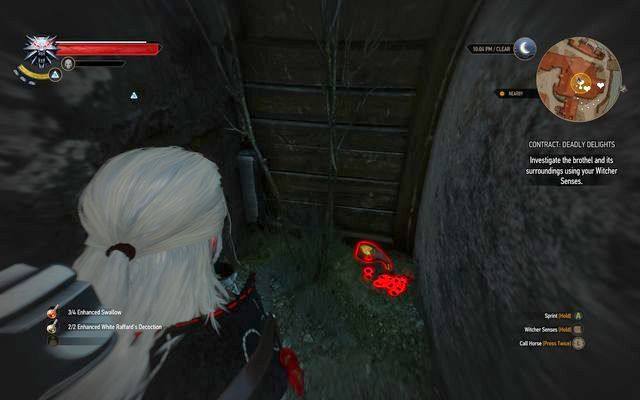 Perfumes in the corner of the Catherine Bootlegger

Otherwise, after picking one of the other options you will have to return to the back of the brothel and search for perfumes in the corner. After activating the witcher senses, follow the smell. It will lead you to the nearby buildings. Sadly, the door will be locked. Use the ones from the neighboring house on the ground floor - this way will get you inside.

Succubus Salma will be your enemy. Once again, you can spare her or fight her. Aggressive option will give you a succubus mutagen, a trophy (+5% of obtained gold) and 186 crowns. To defeat the succubus, use fast attacks and avoid fire attacks - block won't help, Quen will work for a very limited amount of time - the best option is to jump away. If it doesn't work for you - you can try an unusual tactic: fist fight. By doing so, you won't let succubus attack you. Sometimes she will manage to get through your attacks, but the chances for your success are very high.

If you spare the monster, you won't receive only the mutagen. The trophy (a gift) and 186 crowns are still going for you. And you will be given a valuable sword Maugrim.

Your reward for completing this task is a succubus's trophy: +5% to found gold. 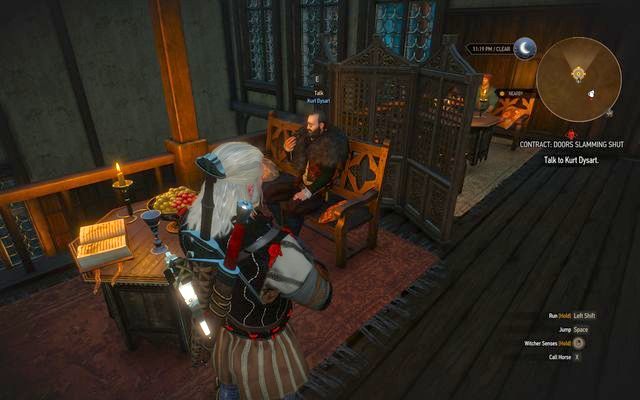 After getting the announcement from the board in front of the inn (M6,3) walk inside and go to the first floor. Talk with count Kurt Dysart (M6,15). Pick any answer for the question about the school, during the negotiations select the amount of 320 crowns. While you're in the city, NECESSARILY repair your weapon - fighting this specific enemy will quickly damage it. 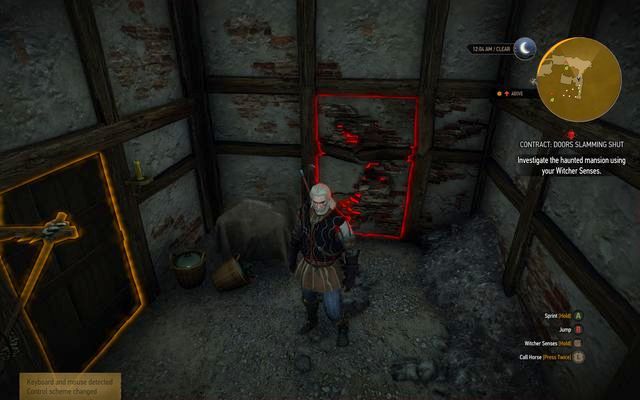 A passage behind the secret wall in the basement

Go to the house marked by the quest giver. It's outside the city. Walk inside and go to the basement. There you will find a wall that can be destroyed with the Aard sign. Walk forward to the wall, on the desk you will find a journal. Read it.

You must open a secret passage with a switch. It can be found in the eastern part of the underground. Jump to the water and swim to the wall - the switch that opens the door can be found on the ledge. Go back and prepare for battle. Your enemy is an earth elemental. Before the battle, use elemental oil, prepare potions and dimetrium bomb - use the latter at the beginning of the battle to remove elemental's magic attack. 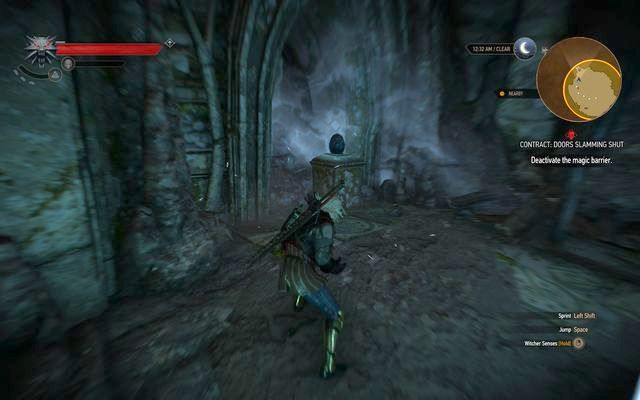 Destroy the artifact to release the elemental

To deactivate the magic barrier of the monster, you must destroy the artifact behind him with the Aard sign. Geralt will suggest to destroy the ceiling's support to drop it on the enemy, but sadly it won't work - the witcher will admit it after the battle.

The best way to fight the monster is standing in front of him and observing his attacks. Because he makes wide swipes before attacking, it's easy to determine what sort of attack and from which side he will perform. All you need to do is jump to the side from which he attacks. You can deal two strong attacks (or 3-4 fast ones) and jump to the side of the attacker to gradually beat the enemy. Only watch out for the jump attacks - you must jump back from them. Don't attack the enemy when he is covering himself - he can perform a strong counterattack which you won't be able to avoid.

After the battle, take the trophy (+10% chance for cutting off a limb) and alchemy ingredients (and a goof quality sword). Return to the quest giver for the reward - he is still sitting in the inn.

Your reward for completing this task is earth elemental's trophy: +10% dismemberment chance.