This page of The Witcher 3 Wild Hunt guide can help you with a potential problem with Geralt's development. We explain why does the hero stop receiving XP after completing certain quests. 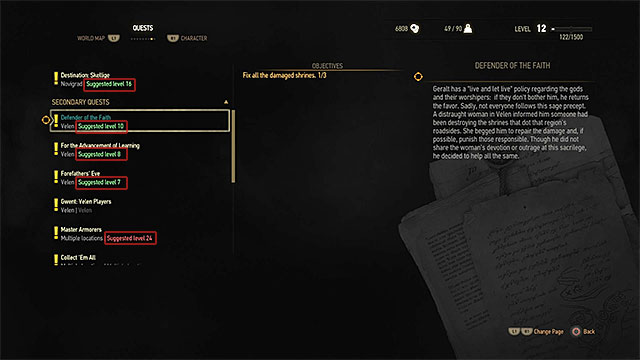 Two main factors that determine how much experience you will receive are current character level and suggested level for the quest. You can check the second parameter anytime you want in your journal. Suggested experience levels can be found next to the information about the location in which the quest takes place.

How to avoid this problem?

You can't completely avoid the "loss" of potential experience points, however you can greatly reduce the amount of such situations. Try to focus mostly on quests that are more or less suited for your current experience level. Leave the more advanced quests for later, even if completing them wouldn't be too hard (because of, for example, the lack of battles in them).

Additionally, try to explore the world in similar order to the one planned by the developers. Start with Velen, but avoid territories where you can meet much stronger monsters. Then, at around 10 level, go to Novigrad. At around level 15, travel to Skellige islands.