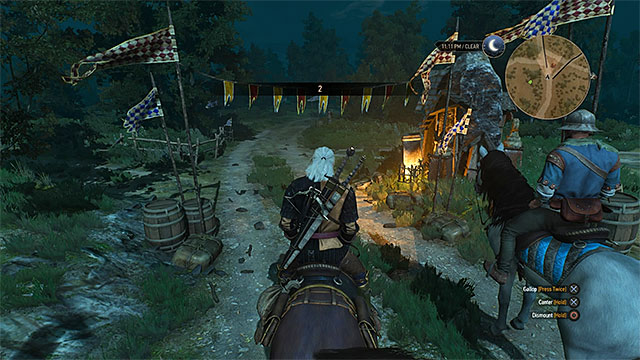 Races are organized near the Crow's Perch and in other places

From the previous chapters of this guide you have learned that Geralt's mount can be used both for traveling through the game world and for participating in some battles. Although the horse can't obtain experience points and gain new levels, you can find new items for him that increases some statistics.

Various items for the horse can be of course obtained by your own, simply by finding them in the game world or by buying them from the merchants. But you should decide on that later in the game because the basic equipment can be obtained easily and for free. You just need to participate in the side quest Races: Crow's Perch about which you can learn by reading the notice board in Crow's Perch. Horse races are organized west from baron's castle. Winning them shouldn't be hard. While completing further races you must only remember about monitoring the durability bar of your horse. When he gets tired, you should reduce the speed for a moment and, at the same time, block your opponent, making it impossible for him to get ahead of you. The fact that the track is the same in all races makes it even more easy.

The above quest offers three challenges. In the races you can gain gold and:

Important! Later in the game you will find even better items. The rewards described above are good at the beginning phase of the game. All races should be completed quickly after reaching Velen and going to the perch for the first time.