This page of The Witcher 3 Wild Hunt guide has a description of the first boss fight with a griffin - The Beast of White Orchard. Learn how to prepare for the boss fight and what to do during the battle.

Griffin - preparing for the fight 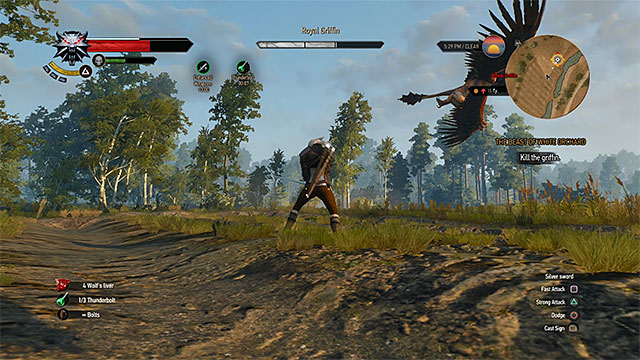 Royal Griffin is one of the first stronger monsters that Geralt must face during his adventures. You can't skip the battle with the flying beast because fighting it is part of the main quest The Beast of White Orchard. Defeating the griffin might prove to be difficult, especially if you're playing on one of the higher difficulty levels. Below you will find some advices about how to prepare to and how to fight the battle.

Most of all, don't rush yourself too much with completing the quest about the griffin. Explore the White Orchard, find all optional locations and complete available side quests. It should allow Geralt to reach at least third experience level. Before going to the battle you should unlock Grapeshot bomb diagram. If you don't have proper ingredients, then try to visit herbalist Tomira.

After you obtain the bombs, place them in one of the active inventory slots. The game will ask you if you want to make Thunderbolt potion that temporary increase attack power. After you create it place it in the inventory slot for the one-time-use items.

Griffin - how to defeat the boss?

Before the battle with the monster Vesemir will give you a crossbow. You should immediately start using this weapon because griffin will be flying above the battlefield and searching for oportunity to weaken you with air attacks. Whenever you see that enemy is flying towards you, jump to the sides to avoid receiving damage.

Using the crossbow will allow you to "encourage" the beast to land. You can start dealing some serious damage to it after that happens. 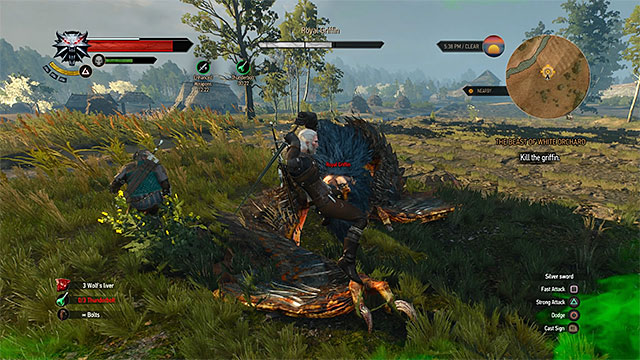 Attack the griffin after he lands

When the griffin lands you should drink the previously mentioned Thunderbolt potion and quickly reduce the distance to the monster to start the main battle with the use of silver (not steel!) sword. Before each attack at the griffin you should use Aard sign. It will allow you to temporary stun the monster and deal some hits without the risk of immediate counterattack from the flying beast. Don't overdo with the amount of performed hits because you can lose a lot on it. In addition to the silver sword you should use all Grapeshot bombs that you have in the battle. A correctly thrown bomb will take large amount of health from the monster.

Don't count on the griffin remaining on the ground to the very end of the battle. From time to time the beast will resume flying above the battlefield. In that case you must repeat the actions from the beginning of the duel, that is jumping to the sides when griffin is performing an air attack and forcing the beast to land with the crossbow.

After the griffin loses around half of his health bar, he will fly away from the field where you fought him. It's not a serious problem, because finding him again is very simple - the beast will hide near the Mill north from where you fought the first part of the battle. You can reach it by yourself or help yourself with witcher senses. After arriving there keep weakening the monster until you finally defeat him and complete your first witcher contract.

Additional note - further witcher contracts aren't mandatory. Despite that, it is wise to complete them as you can receive large amounts of experience and gold for them, as well as trophies that give you various passive statistics boosts (like additional experience for killing monsters or increase of the chance for dismembering the enemy). Remember about preparing for each battle - most of all, reach the level recommended for the battle and check if there is no information in the bestiary about the monster you want to kill (if there is a note, then prepare the oil and bombs for which the monster is not resistant).