This page of the guide to The Witcher 3: Wild Hunt includes walkthroughs for completing 4 witcher contracts from the Crookback Bog location . Our walkthrough explains, among others, how to track the bane of the merchant route, who is the swamp monster, how to defeat the grave hag and how to find and kill the Chort.

Contract: Phantom of the Trade Route 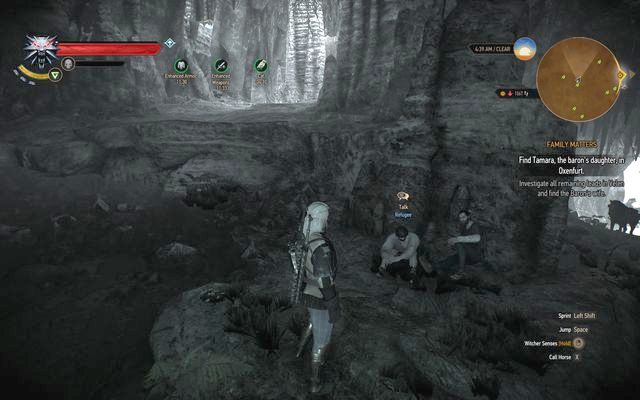 Merchants in the cave

You will find two men (M9,4) in the cave. They will ask you to kill a monster above - a royal wyvern. To lure it away you must first kill two wyverns on the hill and destroy their nests. 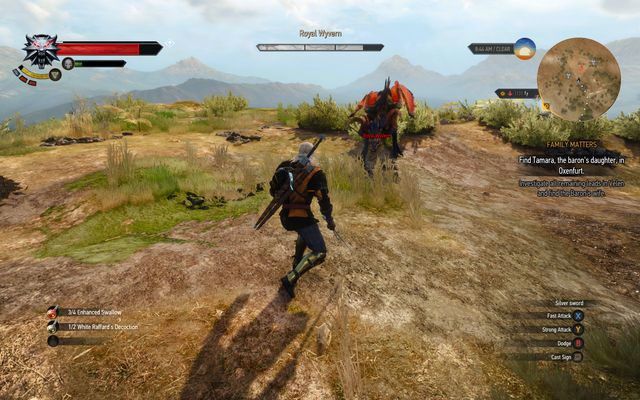 It's easy to defeat wyvern, you don't need to use any special tricks. Simply walk towards the monster and deal fast attacks. When the monster jumps away and prepare for counterattack, jump behind it and deal some critical hits to the back. If you deal fast hits you make it impossible for the wyvern to fly up. Stop fighting only in critical situations, like when you are about to drink regeneration elixir or use Quen sign.

If the wyvern manages to get to the air, use the crossbow to get it down. Draconid oil can be useful as well. At the body of fallen monster you will find wyvern mutagen, a good sword and a trophy. 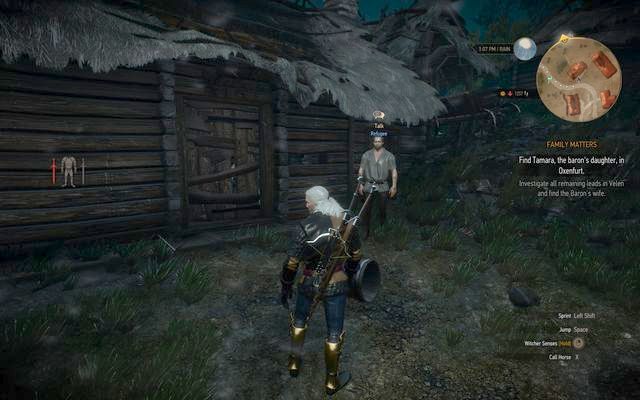 The man in Benek village

Go to the man (M9,5) in Benek. He will give you reward. Important! He is also the basic questgiver for this task and only by taking the contract from him you will be able to bargain (the lowest price in that case is 256 crowns). Reward is 192 novigrad crowns (after negotiations even 300).

Main reward for completing the witcher contract: wyvern trophy: +5% experience for each killed human or monster. 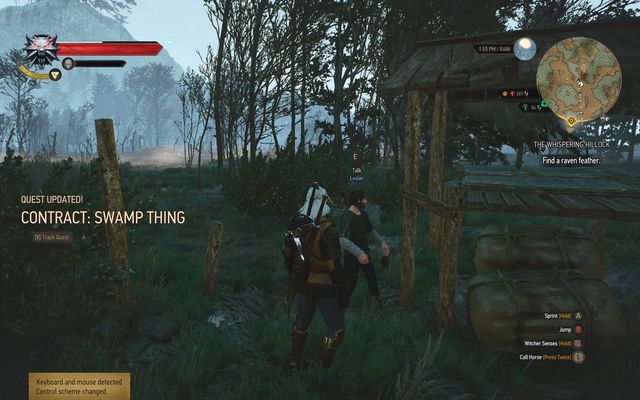 In the Donnerwile you will find an announcement on the board (M9,9) about a swamp monster. Go there and talk with the guy named Leslaw (M9,10). The proper price is 280 crowns. Go southwest where you will find some tracks covered with magic. Artifact from Keira Metz, The Eye of Nehaleni, will come in handy. Geralt receives the Eye of Nehaleni at the end of the main quest Wandering in the dark - it's described on a separate page of our guide (Chapter Midcopse).

Follow the trail to the house on the west (if you don't have the artifact, go directly there). There, after examining the corpses, you will be able to go to the place where you will meet the monster. 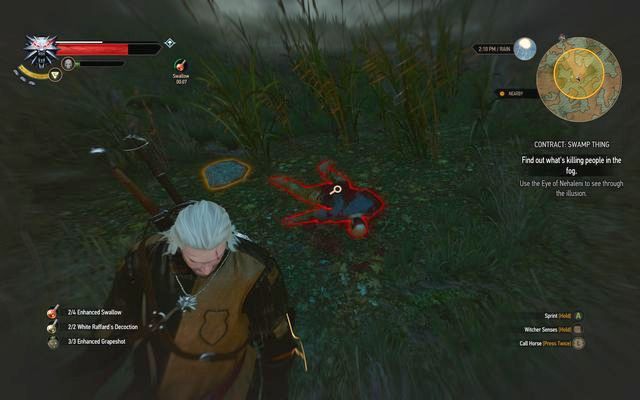 Corpse and tracks hidden with illusion

You will fight the Ignis Fatuus monster mostly by using the Moon Dust bomb, Necrophage Oil and Quen sign for protection. Use the witcher sense to find the entrance to the cave. It's once more hidden under illusion and you must use the artifact. Observe the air meter - there are poisonous gases on the swamps, you won't hold there for long. You can catch your breath in the cave. If you don't have the artifact to take down the illusion, go slightly east and you will find another entrance to the cave (M9,11).

During the battle it is wise to use Yrden sign and stay in its range. It will slow down the enemy and make it easier to dodge when he appears from the fog. Axii sign is effective against him as well when he appears from the dog too far from you. After the battle ends take his organs and the trophy - it gives +5% to received gold. Search the cave as well - you will a chest and a corpse at the exit. You will obtain armor parts, precious weapons, Ursine Sword diagram and alchemy ingredients. No return to the questgiver at the swamp and take the money reward and 240 experience points.

But it's not the end - Leslaw doesn't have the money you have agreed on. You can force him to give you the money now (slightly less that promised) or agree to come back in a week (the game will automatically inform you when the time has passed) and receive twice the money you have bargained (which means up to 560 crowns). The second option is obviously better, especially since we can help ourselves with meditation to speed up the passage of time. 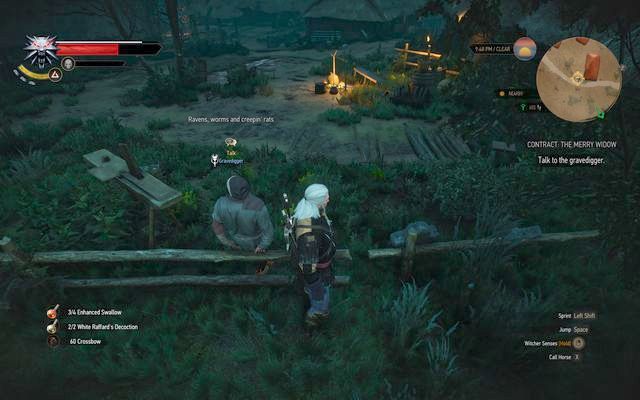 After taking the contract from the notice board in Lindenvale (M9,12) search for the Gravedigger in the neighborhood. You could go directly to the house near the road leading sound where you will find some trail - but first you should bargain a good price for the contract. The best price is around 265 crowns. 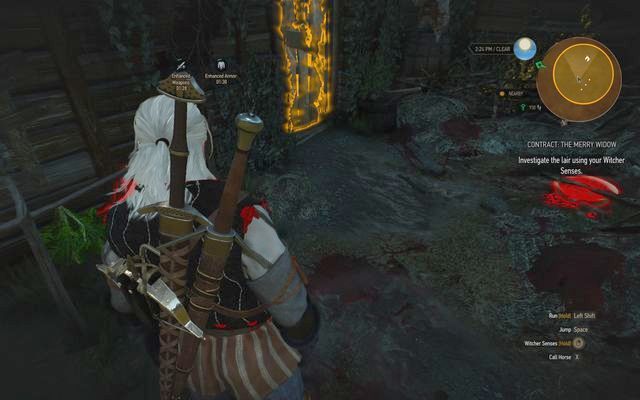 Monster's hut - the skulls can be found on the left side

Now go to the cemetery and search for clues. It's at the main road, east from the village. Dispose of three ghouls there (level 9) and search through the graves with the witcher senses.

A new trail will appear - the smell. Follow it to the house at the road, south from the village (M9,13). After searching through the hut take the skulls from there to the graveyard and place them in the shrine. 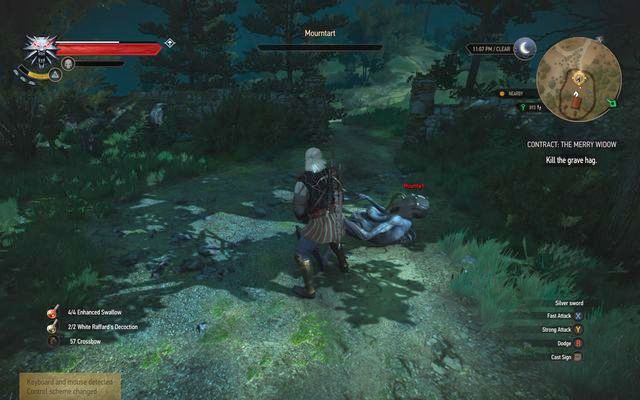 A Grave Hag will appear. Your enemy is a necrophage, so the proper oil will help you deal more damage and the Black Blood potion will make your blood poisonous for your enemy. As for the signs - all of them will be effective.

Important - this battle can be won in a single hit. Use the Aard sign - it's good if you have upgraded it - to knock down the enemy on his back (it doesn't have to succeed at first try). If you succeed, jump towards the enemy and deal one hit that takes away all enemy's health bar.

Search the corpse after the battle and go back to the gravedigger in the village. As usually, at the corpse you will find a good sword (Addan Deith), alchemy ingredients, trophy (+5% experience for killing humans and monsters) and the bargained reward, around 265 novigrad crowns (without negotiations - 180). Additionally, you will receive 240 experience points.

The main reward for completing the witcher contract: Trophy from the grave hag - 5% more experience points for killing people and monsters. 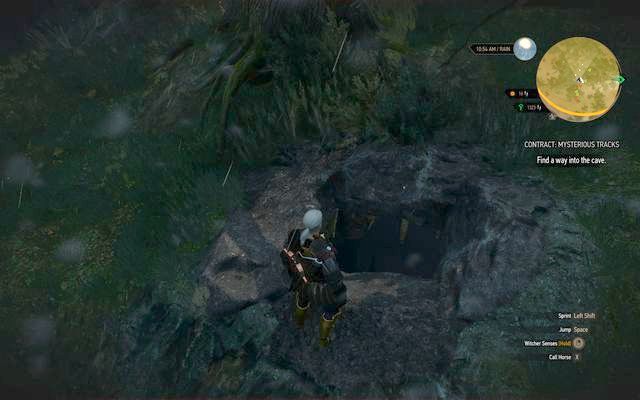 In Lindenvile village (M9,12) you will find another contract on the notice board. If you want to complete the quest, start by talking with the Hunter sitting in front of the hut. Bargain the reward to 310 crowns and go to the place of the attacks. 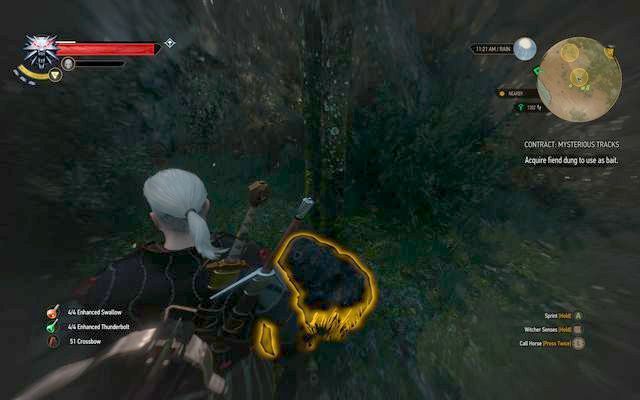 Search for some clues. Follow them to the tree where you will discover fur. Now follow the scent - the trail will end at some rocks. Search for an entrance to the cave (M9,18) - don't worry, the battle won't start immediately. Examine the animal corpse, footprints and blood marks. Now you must prepare the Chort lure. After leaving the cave, take the Fiend dung and Crow's eye. Open the alchemy menu and prepare the lure from the last tab.

Now walk through four places marked around the hill and place the lure in each of them. Then return to the cave - prepare for the battle before entering. Relict oil, Cat potion and standard potions should be helpful. 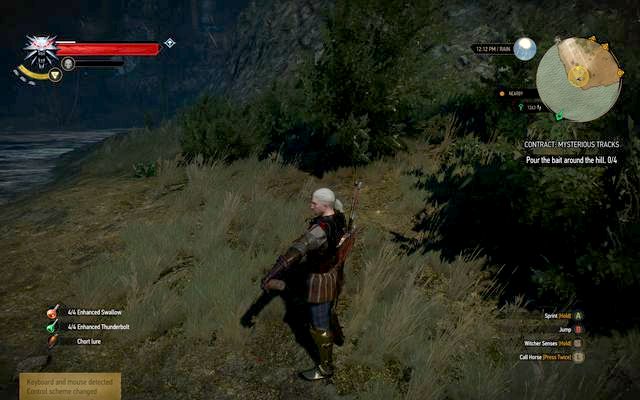 The battle with the chort is hard. He attacks with a charge, hits with his hands and, what's worse, with his horns. He has no magic ability, but he is resistant to almost everything. Jump away before each charge and never attack him from the back after the charge - he will counterattack immediately.

One of the battle strategies is as follows: activate the Quen sign, stand in front of him and wait for his hand attack. Dodge to the side from which the attack is performed. Again jump quickly and attack with two light or one strong hit while remaining close to the back leg (sometimes critical hits will succeed). You must move along with the chort while constantly hitting him. This tactic require constant action and observing - if you rotate too little (bad direction, wall) perform another dodge or jump.

After defeating the enemy search his corpse - you will find a unique sword Azure Wrath, chort trophy (+5% experience for killing the monsters) and alchemy ingredients. Go back to the Hunter for the reward.