This page of The Witcher 3 Wild Hunt guide contains a walkthrough of all side quests related to Crookback Bog . In the walkthrough, we describe how to get a special root for a sage from the village of Benek, how to behave in the matter of a ghost from a tree, how to properly examine the Reardon house and where to find a false witcher. 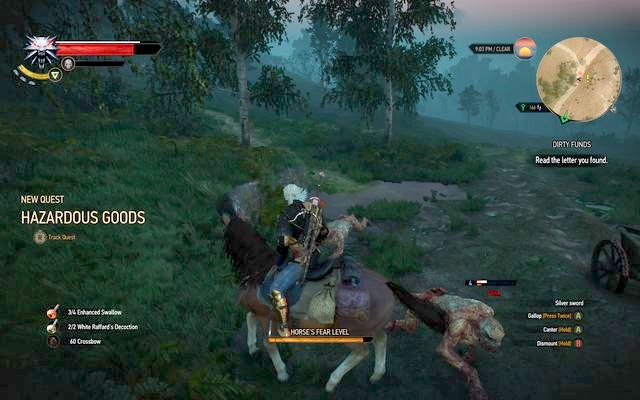 After saving him from the ghouls, help the poor guy get out from under the cart

The villager Gert Borel (M9,1) on the road near Lindenvale has been attacked and is waiting for your help.

Kill three ghouls that are attacking him (level 4) and talk with him. You will learn that he is transporting corpses for money. Leave him alone or decide to burn the corpses for safety. If you walk away, you won't receive any reward, if you help - you will gain 20 experience points. Burn the corpses with Igni sign.

The Truth is in the Stars 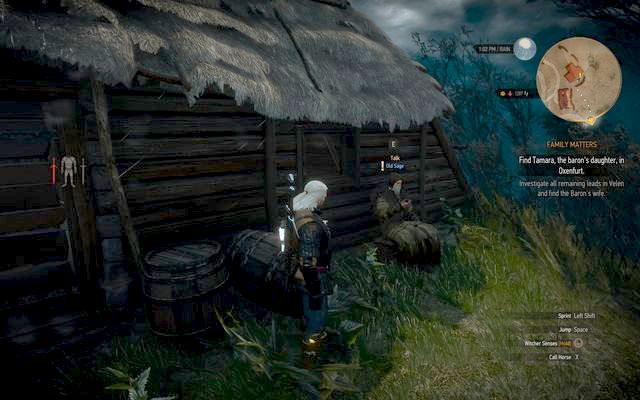 Old Sage (M9,6) can be found in Benek village. You can optionally play with him during the quest Gwent: Velen Players which describes beating different opponents in Gwent.

Proper task is as follows: first the elder will ask you to bring some food. You will probably have something in equipment, so the second part of the quest should start (you will receive 10 experience points). The sage will ask you to bring him a special root that can be found in the cave (M9,7) southeast from the village. 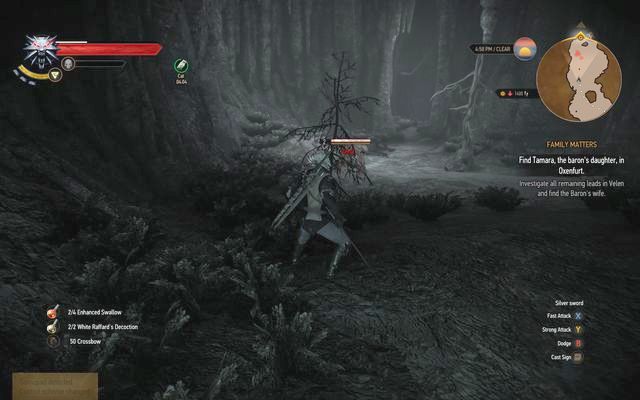 Ghouls in the cave - the root is on the right side

You will find a group of ghouls in the cave (level 2). After you take care of them, use the witcher sense to search through the cave for Dragonroot. It's on the eastern side of the cave, on the ground. Take the root and go back to the sage. The quest will end and you will receive 50 experience points. 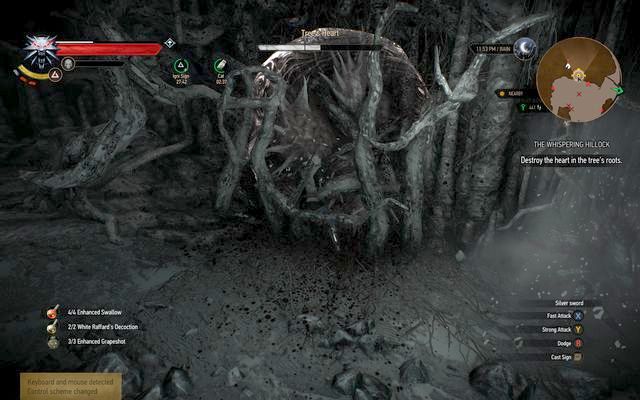 The heart of the tree - the prison of the ghost

This quest is related to some of the main quests of the game, in particular the Ladies of the Wood main quest. The walkthrough for this quest is available on a separate page of our guide.

South from the Donwarren there is a cave to which entrance is protected by a werewolf (level 8). Inside the cave (M9,8) you will find a ghost that will ask you to release him. If you refuse - he will attack you by calling Endregas (workers - level 6) until you destroy the plant in which the ghost is imprisoned. You must attack until the heart of the plant is uncovered, then use fire on it. You won't receive any rewards for the battle, buy you can collect Diamond dust from the remains. 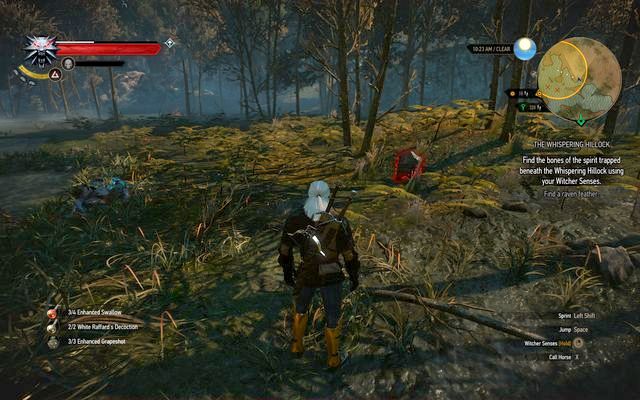 The grave pointed by the ghost from the tree

First go northwest and find a grave on the swamp - take bones from here. Next required item is a crow's feather. You will find it near the Donwarren village (to the west) in a large nest on the edge of the rock behind the bridge. 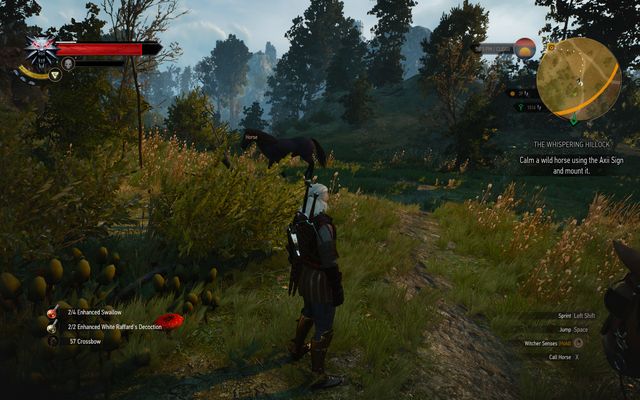 Pick any horse which you will take to the ghost

Final required thing you need is a horse. Go to the pointed location west from the cave and, when you see a horse, use Axii sign to calm him down and be able to ride it. Ride on the horse to the cave. Now you can outsmart the tree and kill it by picking correct dialogue option. You will avoid fighting by doing so. If you decide to release the ghost, he will enter the horse body and the quest will end.

The Fall of the House of Reardon 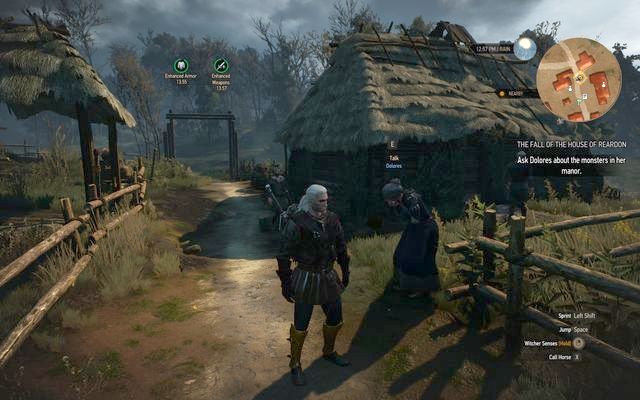 You will find this quest on the notice board in Lindenvale (M9,12). Talk to Dolores - the woman crying near the road. You will hear her from the notice board. She will ask you to clean her old house and give you a key to the chest with savings - the reward for the quest. First clean the outdoor - four ghouls on level 7. 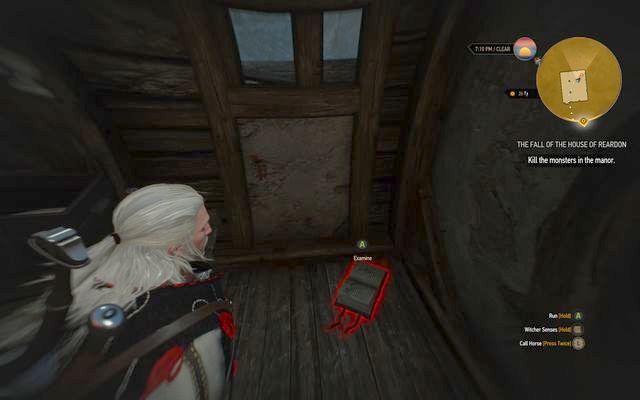 Dolores' journal in one of the buildings

Behind the stable you will find an entrance to the basement. Inside you can collect some alchemy ingredients. There is a wall there as well behind which you will find a corpse. All the information you gather can be given to Dolores but it won't greatly change the ending of the quest. Go back to the woman and tell her what you have found. 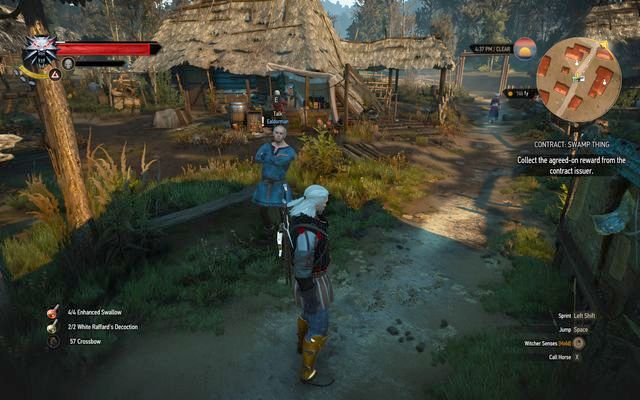 After completing the witcher contract Contract: The Merry Widow and waiting for few days to pass, you will find a new quest in Lindenvale (M9,12) given by the Ealdorman. You must talk with him (he is standing in the middle of the village during day). He will tell you about a fake witcher that was hitting on his daughter. No matter how you behave in the convaersation, the rest of the quest is the same.

Go to the graveyard west from the village. There you will find a ghoul - level 10. Then follow the trail and you will find the hiding fake witcher. Peasants will come after a short moment. You can decide whether you tell them about the fake witcher immediately or will you make them force the impostor to work in the village or even exile him. No matter what you choose - you will receive only 85 experience points and nothing more.