On this page of the Witcher 3 Wild Hunt guide you can find walkthroughs for 3 Witcher Contracts taking place in Novigrad's Farcorners. The solution below will help you complete them, including tips how to locate the Woodland Beast, how to get the travel pass, how to defeat The White Lady, who is The Lord of the Wood, and how to successfully track down and kill Leshen. 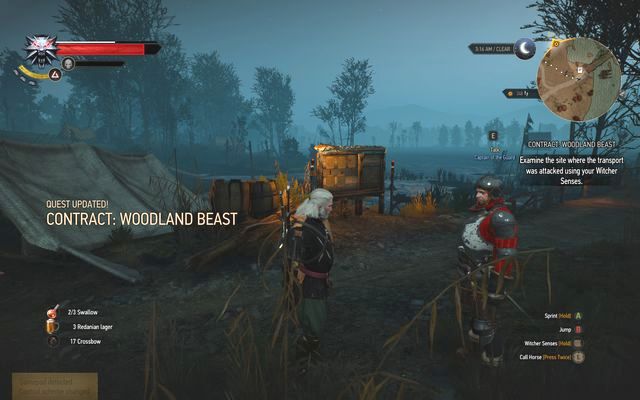 Captain of the Guard is your questgiver

You will find a notice board before the bridge leading to the outpost on the Pontar river (M5,2). Talk with the Captain of the Guard standing nearby. He will tell you that someone is attacking the convoys in the river and that he wants you to investigate it. Go to the marked location, defeat some alghouls (level 6) and investigate the crime scene. You will see some tracks near the cart - follow them to the West. There should be a large group of drowners on the river through which the trail will lead - you don't have to fight them, you can bypass them. In this quest you should be interested in the tree standing in the center of the field west from the river. 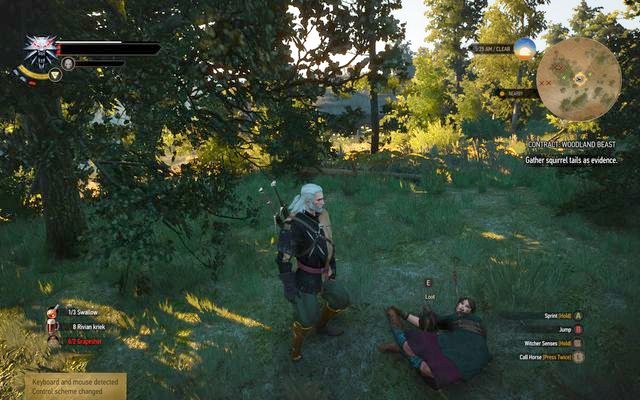 When you reach the tree, an elf aiming at you with his bow will start a conversation. You can tell him that you want to talk with the leader but you will have to agree on laying down your weapons. During the conversation you can promise that you won't tell about them. In that case, you will receive some random crafting materials and you can go back to the Captain of the Guard. You can tell him about the Scoia'tael in the forest - you will receive a pass but no money. You can avoid telling him anything as well, the quest will end successfully but you won't receive any reward.

Otherwise, you will have to dispose of the Scoia'tael commando by killing four elves on level five and the leader (archer) on level 9. After you take care of the enemies, loot any of them and pick up tails - the mark that shows they are a part of enemy community. With this item - a proof - go back to the Captain of the Guard at the bridge. You will receive a reward in form of 30 crowns and a pass that allows you to go through the bridge.

Reward: Completing this contact doesn't reward you with a witcher trophy. Instead, you can obtain a travel pass. This item comes into play when completing Thou Shalt Not Pass side quest from Inn by the Crossroads zone, allowing you to cross the border at the Pontar river freely. 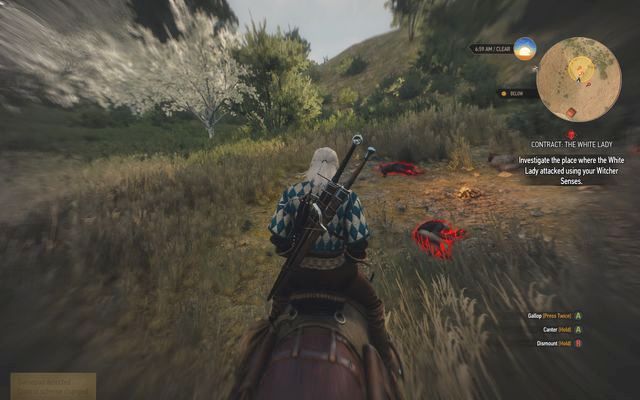 Corpses near the castle - the path leads straight to the building

You will find this quest on the notice board in Farcorners (M5,6). After reading it, go to the questgiver - Helma. She will tell you about the details of the task. After that, go to the plain to the West, near the tower.

By following the trail visible with the witcher senses, you will reach a damaged tower in the middle of the region (you can also start the quest from here by investigating the blood marks). Use the witcher senses, investigate the blood marks and go downstairs. In a small room you will find a ghoul near a corpse. Kill the monster and investigate the corpse. Now go back to Helma and she will give you an item that will allow you to summon the noonwraith. 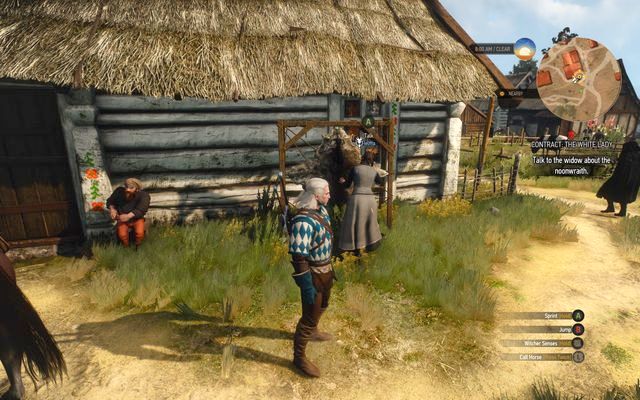 Prepare spectre oil, moon dust bomb and - surprise - crossbow for the battle. The crossbow will be useful when enemy will split into three - one hit will be enough to destroy a copy, but getting close will make the illusion suck some of your health. As every spectre, the White Lady must be captured into Yrden trap. Fighting her is pretty energetic and hard but well rewarded. Near the remains of the spectre, you will find essence of wraith and relic sword Deithwen. Now go back to Helma. For completing the quest you will receive 260 experience points and about 300 crowns - depending on how well you bargained.

The Lord of the Wood 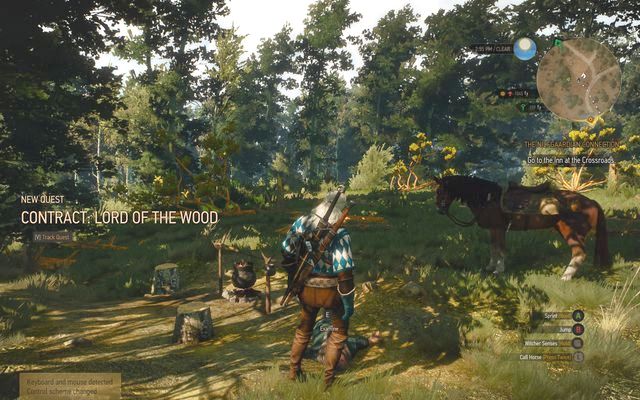 You will receive this quest by reading the notice board in Farcorners (M5,6) or by heading directly to the crime scene. In the western part of the Farcorners (M5,7), inside the forest, you will find some damaged trees and bodies between them. Investigate the crime scene to start the quest. First check the body lying near the campfire. 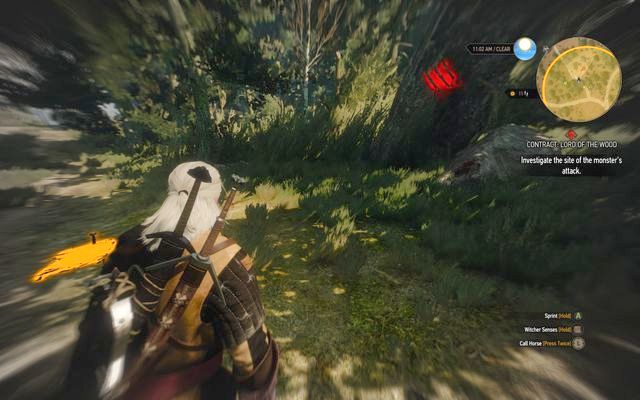 Claw marks and remains near the cart

Nearby, at the road turning East, there is a cart - another thing to check. Few steps further to the North you will find a body of a dwarf in the bushes and, near the cart, by watching to the South, you will see some claw marks in the rock. 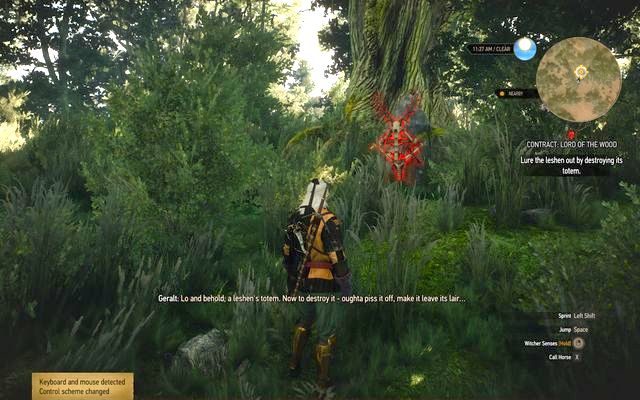 Leszen totem in the forest

Now you must find Leszen totem. Use the witcher senses to check the noises coming from the marked territories. Totem is located South from the cart.

When you find it, prepare for combat. The battle is very easy because leszen is very slow and he uses only two attacks: a classic hit and roots from the ground. It's easy to avoid both of them. He moves by transforming into birds, he can damage you then, but only slightly. He usually shows behind your back. After you take away about half of his health bar, he will summon a wolf to help him (level 22). 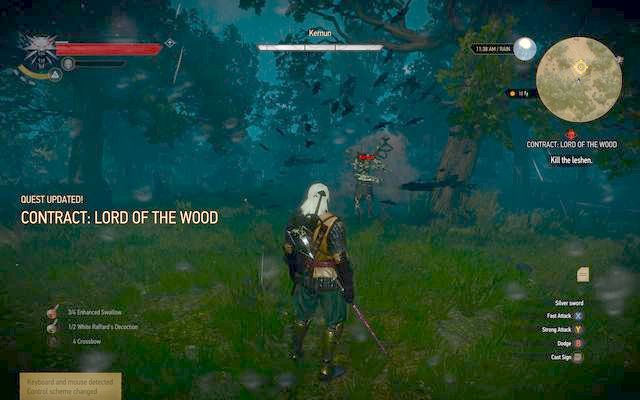 For the battle you should prepare: relict oil and any bombs. The monster is especially vulnerable to fire, so use many bombs and Igni sign. The latter will be especially useful if you have upgraded it to a continuous fire wave - in that case, after each dodge use all energy on it and you will defeat the leshen in few steps.

Go to the questgiver after the battle and talk with Brean Hotsch. For completing the quest (in addition to items found near the leshen - especially a good sword) you will receive 225 experience points and 195 crowns.